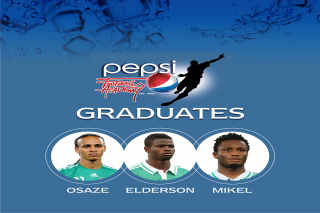 Two days ago, Nigeria marked 55 years of independence from the British colonial rule. Though, Africa’s most populous country and largest economy has quite a number of issues to be tackled, the country has its proud and joyful moments. When CNN asked Nigerians to share “what makes it great being Nigerian,” and also to share their proudest moments, it was no surprise that unity and football (glory) topped the list.

Nigeria is a land of rich ethnic diversities with over 500 indigenous languages, with English, Pidgin, and Football being the major Lingua Franca. Yes, we speak football. It is the most popular sport, and a most unifying bond in Nigeria. Whether it’s a domestic competition, like the Nigeria Premier League, an international competition – World Cup, African Cup of Nations (CAF), or foreign competitions like the UEFA Champions league and the English Premier League, Nigerians are committed to the sport.

The Nigeria national football team is one of the best in Africa, regularly competing for international titles, with a good number of Nigerian footballers playing for major foreign football clubs in England and Europe. The country’s junior under 20 team – Flying Eagles, and the women national team – Super Falcons – are also dominant forces in the world of football.

In the 90’s, the country’s national football team was top best in the world, it placed 5th in FIFA’s world rankings – the highest FIFA ranking ever achieved by an African football team. Over the years, the team seem to have lost steam, placing 52nd on the recent World Ranking, a step up from their previous 53rd position. A lack of motivation and commitment on the part of the players, and the government are said to be the reason for the present state of the football in the country. Yet, despite these issues, Nigeria has produced, and continues to birth world class talents, thanks to local football academies across the country, honing young and skilled talents. Here are some of the country’s top football academies.

Kwara football academy (KFA) is an initiative of former Kwara state governor, Bukola Saraki, who is currently the president of the Nigerian senate. Established in 2005,  Owned by the Kwara state government and established in 2005, KFA is one of the best football academies in Nigeria, the school runs a simple model of combining football training with academic schooling for students ages 13 – 19.

The academy commenced operations with Nigeria’s former national team technical adviser, Clemence Westerhof, who handed over to English technical director, Paul Ashwonth. Ashwonth has a history of managing several professional teams in Europe including FC Peterborough, Dynamo Kiev and FC Rostov, where he was the Sporting Director. The academy also has other star coaches with years of playing experience in and out of the country.

The students receive football training every evening, and attend academic classes every morning, while those out-of-school practice morning and evening, daily. The students are grouped into three categories; the junior cadre, which comprises students ages 13 to 14, the intermediate cadre with students ages 15 to 16 while the elite cadre comprises students between the ages 17 to 19. The Junior and Intermediate group combine academics with football, the elite group combines football with management courses.

“Our vision is to position KFA as a premium brand, with standards of quality comparable with the best football academies globally. Our objective is to provide a world class experience for our students which will reflect in their conduct on and off the field of play and or other pursuits they engage in, outside the game in future.” Some graduates of the academy are signed to football clubs within and outside the country, others have participated in the international competitions with the national team.

The Pepsi Football Academy (PFA) is the most famous of all football academies in Nigeria. Owned by the popular beverage Pepsi, PFA tops the list of football academies not just in Nigeria, but in Africa. Established in 1992, the academy originally launched in Lagos Nigeria, now has over 14 centres across the country, with over 3000 students.

The academy boasts of notable players like John Mikel Obi, Osaze Odemwingie, Echiabhi Okodugha, Joseph Akpala, and many other graduates in local and international football clubs.

PFA provide talented youngsters the opportunity to develop their football careers. The criteria for student membership includes evidence of special skills, attributes, and a good attitude. The demand for membership is highly competitive. Hopeful youngsters apply daily for admission into the academy.

The Academy also operates a UK scholarship scheme set up in 2006, and partners with The Football College, a private, independent, residential college for boys, which combines education with sports along with a special focus on football development.

Established in 2001, Papilo Football Academy (PNKFA) is owned by Nigeria’s legendary footballer Nwankwo Kanu. PNKFA is situated in his hometown in Owerri, and has succeeded in transferring quite a number of players abroad. Some notable players who are graduates of the club include Joel Obi of Torino football club and Stanley Okoro.

Top international coaches like Gary Smith, and Bryan Robson, are occasionally invited to train the students on short courses. Kanu also collaborates with Greensprings School to organize the annual GreenspringsKanu Football Camp, a sports training program conceived out of the desire to expose young Nigerian participants to the rudiments of soccer.

Kanu Nwankwo is reportedly said to be building one of the biggest football academies in Africa that would be open to Under 15 to 19 students.

The Football College Abuja is a private organization founded by Gabriele Volpi in 2012. It was established as a Corporate Social Responsibility initiative by Orlean Invest LTD, and is dedicated to developing young boys with football talent, especially those from financially-challenged backgrounds, in the field of education and total football immersion.

The college team has won the FCT Federations cup and represented the nation’s capital at the national level. The team also participated in the Croatia soccer tourney in July 2013, defeating professional clubs like FC Zagreb and Croatia’s under 21 national team.

The college facilities includes a residential quarters that can accommodate 120 students, the Abuja National Stadium Pitch, and a study centre. The college has centres in Onne, Warri and Lagos.

Midas Football Academy (MFA) was established in November 2006 by Ahmed Bayonle Arashi, to discover young skilled football talents in Nigeria and Africa. The academy was started in response to the needs of parents to get their children actively engaged in the sport of football, with the hope of them becoming professional players.

MFA has participated in international youth tournaments in South Africa, Germany, Denmark, Israel, and in local tournament in Nigeria. The thriving football academy is affiliated with the Nigeria Football Federation.

Siaone Soccer Academy (SSA), Abuja, was established by former coach of the Super Eagles, Samson Siasia. The academy aims to develop young elite footballers, who will go professional players in and out of the country.

The academy offers youngsters an opportunity to realize their passion for the sport, with a chance to participate in competitive, local and international tournaments.  SSA also provides coaching programmes around the country at satellite sports venues, delivered by highly qualified coaches.

With these football academies, most of which are privately owned, Nigeria will continue to produce some of the world’s best soccer stars, in spite of unfavourable government policies. The government and private organizations need to do more to better the structure of Nigeria’s football. Some of the famous foreign football clubs are where they are today because of the support and partnership between the government and private organizations.

Recently, Brazilian football star, Cristiano Ronaldo expressed his intention to open 30 football academies in China, a move prompted by the government’s quest to revamp the image of the sport, with President Xi Jinping pushing for the country to someday host the World Cup. “… There are lots of soccer fans and players in the country, and Chinese government and civil organization also focus on soccer development,” Ronaldo said. The Chinese are currently on a mission to reform their football structure, and with investments by local businessman and several other Brazilian stars, they are sure to become world beaters in the sport soon.

Paul Ashwonth once commented on the immense talent and discipline of young student footballers in Nigeria, “Their discipline , work rate and professionalism is better than any country I have ever worked for. If Nigerians really put their mind to it and had Academies like (KFA) this in every state, then they would equal Brazil for talent. However, the organisation, corruption and short sightedness means they will never do it so the rest of the world need not worry.” The government, the Nigerian Football Federation, and private corporations need to sit-up and prove coach Ashwonth wrong.