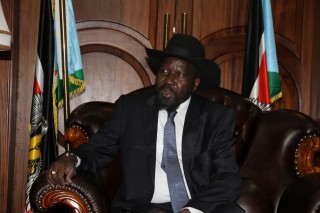 The President of South Sudan, Salva Kiir, may have broken the terms and conditions of the peace agreement that halted the country’s 20-month-long civil war. Kiir recently announced that he has replaced his first vice, Riek Machar with Taban Deng Gai, on the heels of renewed clashes between loyalists to Machar and Kiir. As a result of this, many worry that Africa’s youngest country may be regressing into another civil war.

On Monday, President Kiir said that the failure of his deposed first vice, Machar to return to the country’s capital of Juba necessitated the appointment of a replacement. This is after the president issued an ultimatum for him to return last Saturday, to enable them work towards rebuilding peace in the country. There are reports of fresh violence between the president’s army and the vice president’s, the reason Machar gave for disappearing into thin air.

Barely two years after South Sudan was pronounced independent, a political power tussle between the President, Kiir, and the Vice President, Machar, led to a civil war. In a bid to resolve the issue, several peace agreements were signed by the two leaders concerned, but most of the treaties eventually broke down along the line. In August 2015, after thousands had been killed, a peace deal known as the “Compromise Peace Agreement” was signed in Ethiopia by both sides. The August agreement ended the civil war and ushered in a relatively peaceful new reign in South Sudan.

However, with the recent ousting of Machar and appointment of Gai, there are fears that the peace deal may be deteriorating. The peace agreement states that there will be a Transitional Government of National Unity (TGoNU), which is expected to last 30 months before a permanent ceasefire by the two factions. Chapter 1, section 6.2 of the agreement states that “the First Vice President of the TGoNU shall be selected by the South Sudan Armed Opposition.”

Although the newly appointed vice president, Deng Gai, was reportedly chosen by some members of the South Sudanese opposition, loyalists to the embattled former vice president said the development was a ‘conspiracy’ to overthrow Machar, who has reportedly dismissed Deng Gai before now. Gai, a former Minister of Mining, was the chief negotiator for Machar’s SPLM-IO group during the peace talks.

Now, the controversy remains in deciding whether or not Deng Gai is the true representation of the opposition. If he is not, then the peace agreement has been breached. Even with the agreement, South Sudan is still restive; anything short of religious adherence to the content of the peace agreement may mean a worse period for the African country. In the mean time, the United Nations (UN) has warned President Salva Kiir, that any political appointments must be consistent with the valid peace deal.