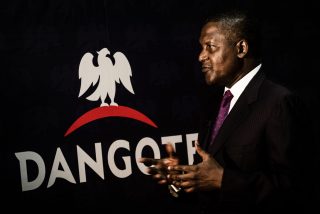 The group’s unaudited results released on the Nigerian Stock Exchange (NSE),  revealed that the group’s profit was 4.7 percent higher than ₦155.49 billion in the corresponding period of 2019. This indicates a resilient half-year performance despite the impact of the coronavirus (COVID-19) pandemic.

According to the results, the group revenue also rose to ₦476.9 billion, while earnings before interest, taxes, depreciation, and amortization (EBITDA) at ₦218.1 billion, with a 45.7 percent margin. Also, Pan-Africa EBITDA climbed 31.6 percent to ₦31.5 billion with a margin of 21.7 percent.

Speaking on the results, Group Managing Director, Dangote Cement, Michel Puchercos, said he is humbled by the fact that the group continues to be in a strong position despite the economic downturn that the world is facing due to the pandemic.

“Although April was greatly impacted by lockdowns and restrictions across our operations, we experienced a strong quarter. We achieved a record high volume and EBITDA margin in Pan-Africa of 4.7Mt and 21.7 percent respectively. Group EBITDA was up slightly despite the impact of COVID-19,” he said.

He went further to announce that Dangote Cement shipped its first clinker cargo to Senegal from its new cement terminal in Apapa, Lagos.

Based on the results released a maiden clinker shipment was shipped from Nigeria via the Apapa Export Terminal to Senegal in June.

More so, there are plans on the way to ship more vessels of clinker to West and Central Africa in the second half of 2020. This makes Nigeria one of the largest bulk importers of cement, being self-sufficient in cement production, and an exporter of clinker.

According to Puchercos, the Dangote group is on track to ensure West and Central Africa are cement and clinker independent, with Nigeria as the main supply hub.

Despite the loss of profit in businesses and economic implications predicted by experts this period, the Dangote group appears to have changed the narrative by recording profit in the face of the pandemic.