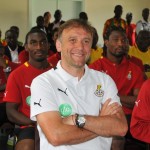 After weeks of speculations and meetings, the Ghana Football Association (GFA) has officially confirmed the sack of Goran Stevanovic, coach of the Black Stars.

Stevanovic’s fate has been hanging in the balance for weeks now following Ghana’s inability to win the 2012 Africa Cup of Nations.

The GFA has been having extensive meetings for the past 3 weeks, postponing a decision on the Serbian tactician twice. But on Monday, the football house decided to end Stevanovic’s stay with the team.

In a statement, GFA President Kwesi Nyantakyi said: “We would like to express our gratitude to the general public for their concerns about the national team and their patience so far.”

Meanwhile, assistant coach Kwesi Appiah will be in charge of the team until a replacement is named.