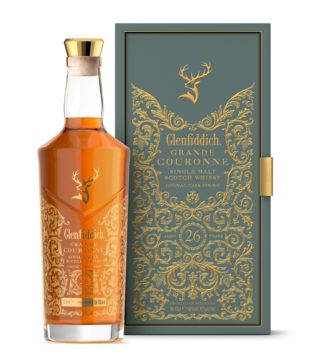 Glenfiddich, the World’s Most Awarded Single Malt Whisky, has unveiled Grande Couronne, the newest addition to its Grand Series. The maverick whisky brand continues to challenge conventions with the unexpected marriage of two luxury worlds.

Grande Couronne is a 26-year-old whisky matured in American and European oak casks at the Glenfiddich Distillery in Dufftown, Scotland, before the crowning glory – an extended finish of up to two years in meticulously sourced French Cognac casks – providing a true taste of elegance.

The Glenfiddich Grand Series is a beautifully disruptive series of single malts that oozes opulence and is designed to elevate occasions and celebratory moments in a whole new way. Grande Couronne is the latest addition to the series, which includes Glenfiddich Grand Cru, aged for 23 years in American and European Oak casks and then finessed in French cuvée oak casks and Glenfiddich Gran Reserva, patiently mellowed for 21 years in bourbon casks before a final flourish in Caribbean rum casks.

Glenfiddich Malt Master, Brian Kinsman, commented: “The Grand Series perfectly encapsulates Glenfiddich’s spirit of innovation and our ability to experiment with aged liquid and intriguing finishes. Grande Couronne is the latest to exemplify that approach. It is the only Glenfiddich single malt that has matured in American and European oak casks and finished in rare French Cognac casks. The length of the finish, two years, is highly unusual and adds extra layers of sweet toasted oak and velvety aromas of café crème, brown sugar and soft spice.”

The bottle and packaging are adorned with an ornamental gold filigree, whilst exquisite artwork reminiscent of great renaissance paintings are revealed inside the box. Glenfiddich Gran Reserva’s bottle and packaging has also received a stylish redesign, echoing the vibrancy and warmth of the liquid.

Claudia Falcone, Glenfiddich Global Brand Director comments, “Glenfiddich’s maverick spirit is very much alive and well in this new release. Grande Couronne adds a crowning glory to any occasion offers a true taste of opulence and brings together the unexpected marriage of two luxury worlds.”

It comes in an Antique Gold colour. Vibrant and lively with an abundance of toasty oak sweetness. Reminiscent of a French pâtisserie, freshly-baked Tarte Tatin and buttery choux pastry. Deep, velvety smooth and indulgently sweet. Café crème with soft brown sugar and a hint of spice.

Founded in Dufftown, Scotland by innovator William Grant, Glenfiddich first ran from the stills on Christmas Day, 1887. Adopting revolutionary methods and practices Grant’s maverick attitude to whisky production saw Glenfiddich excel for over a hundred and thirty years, becoming the first single malt whisky to be promoted outside of Scotland, and ultimately, the best-selling and most awarded single malt whisky in the world. While Glenfiddich is now sold in over 180 countries across the world, the brand is one of the few single malt distilleries to remain entirely family-owned and is still produced in the same distillery which William Grant and his children hand-built.

William Grant, founder of Glenfiddich, was one of the pillars of the Dufftown community in 1887. He is most famous for owning his own distillery, but he also had a wide range of interests beyond whisky. He was a Major in the local Volunteer Militia (forerunner of the Territorial Army), which was a popular activity throughout Banffshire in the Victorian era. He was also Precentor (the person who led the singing in church) at their local Dufftown church. As time went on, he was one of the biggest employers in the area.

William Grant & Sons, Ltd. is an independent family-owned distiller headquartered in the United Kingdom and founded by William Grant in 1887. Today, the luxury spirits company is run by the fifth generation of his family and distils some of the world’s leading brands of Scotch whisky, including the world’s favourite single malt Glenfiddich®, The Balvenie® range of handcrafted single malts and the world’s third largest blended Scotch Grant’s® as well as other iconic spirits brands such as Hendrick’s® Gin, Sailor Jerry®, Milagro® Tequila, Tullamore D.E.W Irish Whiskey, Monkey Shoulder and, most recently, Drambuie and Hudson.