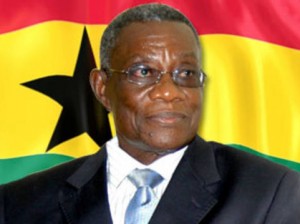 Upon his death, Mills becomes the first Ghanaian President to have died while in power.

Although the cause of his death is yet to be ascertained, Mills have been battling with throat cancer for some time. Not too long ago, he recently came back from the United States where he received medical attention.

Rumours of his death have been on for awhile. Former Minister Elizabeth Ohene affirmed that ,”For the past three or four years there’s been news he’s been unwell and rumours of his death – twice – and he appeared with grim humour to say they were exaggerated, insisting he was well.”

Evans Atta Mills was the third President of the fourth Republic of Ghana, West Africa oil, gold and cocoa producing country from the 7th of January 2009 to the 24th of July 2012.

Born on July 21st, 1944, at Tarkwa in the western region of Ghana, John Attah Mills hailed from Ekumfi Otuam in the Mfantsiman east constituency of the Ghana central region.

An avid learner and educator, Attah Mills began his formal educational journey at Achimota Secondary school, where he obtained his General Certificate of Education (GCE) Advanced Level in 1963. He proceeded to the University of Ghana, Legon, where he bagged a bachelor’s degree and professional certificate in law in 1967.

In 1968, Mills studied at the London school of economics and political science.

Not satisfied with his current educational position, he went to the prestigious School of Oriental and African Studies (SOAS) in London where he obtained a PhD in law.

John Evans Atta Mills was also selected as a Fulbright scholar at the equally prestigious Stanford law school in the US where he was awarded his PhD after successfully defending his doctoral thesis in the area of taxation and economic development (at age 27).

At a time when many would have stayed back abroad in search of greener pastures, Mills returned to Ghana to start his formal teaching assignment at the faculty of law at the University of Ghana, Legon. He taught at the university for more than twenty-five years.

Mills spent these years to research and serve as a visiting lecturer and professor at a number of educational institutions worldwide.

Professor Mills also served as an examiner in various finance related institutions throughout Ghana. These institutions include the Institute of Chartered Accountants, Institute of Bankers and the Ghana tax review commission.

Described as a man of high integrity, Professor John Evans Fiifi Atta Mills, ventured into politics as he grew older. In 1997 to 2001, he served as Ghana’s vice president under president Jerry Rawlings.

He was the only person, in the history of the National Democratic Congress (NDC) party, to have run for president three consecutive times.

His first attempt for the presidential position was in the year 2000. He made another attempt in the 2004 presidential elections as the candidate of NDC. He however failed on both attempt but later succeeded in his third attempt in 2008.

His campaign theme for the third attempt was on “change”.

Before his death, he had just been nominated by the National Democratic Congress to stand for a second term.

Mills has lots of publications to his credit on Ghana’s transformation, some of which include:

• Taxation of periodical or deferred payments arising from the sale of fixed capital (1974) university of Ghana law journal pp 170-178
• Exemption of dividends from income taxation: a critical appraisal (1977) review of Ghana law volume ix no. 1 pp 38-47
• Report of the tax review commission, Ghana, parts 1,2&3, Accra, October 1977;
• Casebook on Ghana income tax
• Ghana’s income tax laws and the investor. An inter-faculty lecture published by the University of Ghana.
• Criminal law treatment of sexual activity generally
• The role of the state in the evolution of the family in Anglophone countries of Africa: an overview.
• A survey of taxes on the individual in Ghana.
• Ghana’s wealth tax: some issues and problems
• Ghana’s new investment code, an appraisal (an inter-faculty lecture delivered in 1986.

All work no play makes jack a ….

As the saying goes, all work and no play makes jack a dull boy. Despite his political and bookworm lifestyle, Professor Attah finds room for recreational activities to unwind.

As an avid sportsman and sports fan, Professor Mills has supported the academic community and the nation at large through his contribution to the Ghana hockey association, National sports council of Ghana, and Accra hearts of Oak Sporting Club.

He is a keen hockey player and once played for the national team. Until his death, Professor Mills was a member of the veterans’ hockey team.

Apart from playing the game of hockey, Mills equally keeps his body in shape by swimming. He reportedly spends close to two hours every day when he has time.

In his lifetime, Professor Attah Mills was:

Having described himself as a social democrat that leaned broadly on independence leader Kwame Nkrumah’s idea of social welfare, Mills is widely known as a man of integrity.

A writer describes him as a man of high integrity, humble, a liberal minded person who consults and peace is his watch-word.

In his country, he is seen as Ghana’s “asomdweehene” which literally means the “king of peace.”

Mills won accolades both at home and abroad for his sound economic policies and commitment to democracy and good governance. Globally, he is praised as leader of a stable model democracy in Africa.

He was also praised for Ghana’s healthy democracy.

Barack Obama at the oval office once professed Attah Mills as “a good-news story” in Africa.

Mills is also known for stressing the need for political stability in turbulent region. According to Reuters, Mills had told President Obama in March that “We are going to ensure that there is peace before, during, after the (December) election, because when there is no peace, it’s not the elitists who will suffer, it’s the ordinary people who have elected us into office.”

It was under Mills regime as the President of Ghana, that his country, an African gold producer, started pumping oil in 2010. Ghana also posted a double-digit growth in 2011, burnishing its image as an increasingly attractive investment destination on the continent.

The Nigeria House of Representatives, in a statement in Abuja by its Chairman, Media and Publicity, Alhaji Zakari Mohammed, said: “The death of Ghanaian President, Mr. Atta Mills has been described as a great loss not only to Ghana but to Africa in general. The late president was an embodiment of humility and a honest and transparent leader whose wit and wise counsel on the development of the region would be greatly missed. Similarly, the late Atta-Mills will be missed for his politics without bitterness.”

Osun State Governor, Raufu Aregbesola, also described Mills death as an immeasurable loss. He said: “Africa has lost a rare gem. Atta-Mills was quintessential leader who left no one in doubt over his readiness to advance the course of democracy. Had African countries been blessed with the likes of Atta-Mills over the decades, our continent would have successfully demonstrated to the world that Blacks too are capable of organizing themselves to live better lives than what we currently have throughout our continent.”

Liberia’s President Ellen Johnson-Sirleaf told BBC that, “On a personal level his moderation and integrity stood out.”

A statement released by the U.S. state department spokeswoman, Victoria Nuland, said, “our thoughts go to his family and to the people of Ghana, who have lost a beloved leader.”

A West Africa expert with South Africa’s institute for security studies, David zounmenou, said Ghana’s president would be much missed. “He was a God-fearing man with a good heart, who sought to balance regional interests with Ghanaian interests and remain neutral while co-operating with regional peace and stability efforts. He was a good example for the continent and will be greatly missed.”

However, since the announcement of his death, Mills’ vice president John Dramani Mahama has been sworn in as the new president of Ghana as provided by the constitution.

Mills is survived by his wife, Ernestina Naadu Mills, a marriage educationist and a son, Sam Kofi Atta Mills.