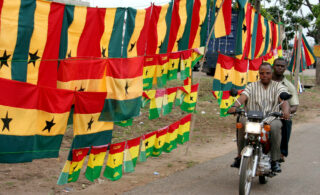 Ghana’s plan to save its economy is hurting investors

Last week, Ghana made the tough choice of asking its local bondholders to accept losses on interest payments. It made this decision through a debt swap, aiming to restructure its debt to qualify for an IMF loan.

According to Ken Ofori-Atta, Ghana’s Finance Minister, the country will replace existing local-currency debt with four new bonds maturing in 2027, 2029, 2032 and 2037.

“The annual coupon on all these new bonds will be set at 0% in 2023, 5% in 2024 and 10% from 2025 until maturity,” he said in a video posted late Sunday. He also said, “there will be no haircut on the principals of bonds,” and that “External-debt restructuring parameters will be presented in due course.”

Earlier this year, Ghana got shut out of the international debt market. So raising money from more creditors has been challenging. As a result, it is negotiating a $3 billion deal with the International Monetary Fund (IMF). However, part of the IMF’s lending requirements is that Ghana gets its debt on a sustainable path to qualify for support.

According to Ghana’s budget data, it had 393.4 billion cedis ($28.1 billion) of debt at the end of June, and debt-serving costs made up about 68% of tax revenue over the same period. Repaying loans have become more expensive, seeing that the cedi was the world’s worst-performing currency against the dollar this year, losing 56% of its value.

Runaway inflation and rising interest rates have been causing worries for Ghana’s investors. And now that Ghana needs to save its economy, investors are taking the fall.

The cocoa-producing giant has 43.5 billion cedis of domestically sold local-currency bonds maturing through the end of June and $663 million coupon payments on dollar debt.

But the new debt restructuring plans require local bondholders to accept losses on interest payments and could involve losses of up to 30% for foreign investors.

Ghana’s banks are taking the biggest hit from this decision, as they held 32% of outstanding government bonds at the end of August.

A few years ago, this wasn’t the case with Ghana. The country was a magnet for foreign investment, pitching itself as business-friendly and politically stable. What changed in such a short time?

This is not Ghana’s first time in debt distress. In 2000, it had borrowed so much that it enrolled on the Heavily Indebted Poor Countries initiative of the International Monetary Fund and the World Bank. As of 2006, when the initiative ended, Ghana’s total public debt stock was US$780 million (25% of GDP).

After that, Ghana started becoming popular among investors. Its fame grew even faster after 2010 when it began exporting oil. That made sense, seeing that it was already the world’s second-largest cocoa producer and ranked second in Africa for gold production. The following year, Ghana’s gross domestic product jumped by almost 14%, and the economy got bigger every year since then.

But while Ghana revelled in its seeming fairytale, it started digging its own ditch. The government started spending more than it could afford and accumulated plenty of debt over the years. Now, Ghana’s debt accounts for more than 100% of its GDP, according to Ofori-Atta.

Many decisions that led to Ghana’s debt crisis were attempts to prop up the economy. For instance, Ghana’s government spent $1 billion on refinancing loans owed by private power producers, hoping to reduce the country’s electricity bills and has scrapped fees for senior high school students. Debt owed to fuel suppliers and power companies could reach $12.5 billion by 2023. It has also spent over 25 billion cedis ($1.8 billion) to strengthen its banking industry, which has declined because of bad loans and still needs another 8 billion cedis to complete the process.

On the other hand, revenue generation has not been smooth. Crude production has been underwhelming as it never meets the government’s projection. Currently, it stands at 200,000 barrels per day, less than half of its earlier predictions. So it’s no surprise that investment in Ghana’s oil sector has dwindled in recent years.

Ghana’s debt crisis is already chasing investors from the country. Until this year, foreign investors were unusually dominant in Ghana’s debt market, holding nearly 40% of domestic debt. But that figure is dropping so fast that it might sink below 10% by the year’s end.

Ghana’s latest request from the IMF marks the 17th time it is approaching the fund. Yet, it has often failed to meet targets in its previous programs. The previous one, which ended in 2019, closed with a waiver from the IMF. But the government didn’t wait too long after that to launch an aggressive foray into the Eurobond market. Many investors were worried about that move, and today, their fears are becoming confirmed.

Ghana has been selling Eurobonds for the past nine years. But this year, it was shut out of international capital markets because investors lost faith in its ability to service its loans. The country’s response was not any less unsettling, as it started taking out domestic loans, paying annual interest rates of almost 30%. The central bank had to intervene with funding when Ghana almost defaulted on its local debt. But even the central bank has limited power to save the government.

So it’s no surprise that many investors have exited Ghana’s bond and currency markets. Bringing investors back will require the country to regain trust, not just by showing revenue prospects but also handling its finances better.