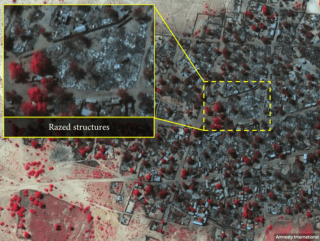 On Friday, July 7th 2017 Africa and the world at large celebrated the successful launch of Ghana’s first satellite into space. This technological feat was made possible by the efforts of a team from a private University in the West African country, the All Nations University.

“It has opened the door for us to do a lot of activities from space,”  Dr Richard Damoah, the product coordinator told BBC.

The satellite named GhanaSat-1, was shot into space from the International Space Station, while the team back in Ghana watched from the university’s auditorium. The satellite has low and high-resolution cameras on board. It will be used to monitor Ghana’s coastline for mapping purposes and to collect data in that respect. The launch, which was made possible by collaboration with the Japanese Aerospace Exploration Agency (JAXA), was a 2-year project that cost $50,000.

Often times, people do not associate Africa with the high-tech sphere of “space”. But surprisingly, African countries are now looking towards that direction due to its potential and usefulness. Apart from Ghana which just joined, Nigeria and South Africa are currently the only sub-Saharan African countries taking the lead in this sphere. Countries such as Ethiopia, Angola and Kenya are currently working towards launching a satellite into space soon.

So far, Nigeria and South Africa have seen the usefulness of satellites for Earth observation and telecommunications as they have launched several satellites in space. It is worthy to note that Earth observation satellites can collect data on areas of importance to a country’s economy and well-being such as agriculture, natural disasters and elections.

How far has Nigeria gone in the space sphere

Nigeria has used its satellites to monitor the oil-rich Niger Delta. Its satellites have also been used in election monitoring, providing crucial information about voters who may otherwise have been overlooked by poll workers. Satellites have also proved useful in the fight against extremist groups such as Boko Haram. In 2014, Nigeria used its SatX and Sat 2 to monitor the group’s movements and to help find the 273 girls they had abducted.

What did South Africa do differently in the space sphere?

South Africa launched its first satellite, SUNSAT, in 1999. In 2009 it launched its second satellite known as  SumbandilaSat, from Kazakhstan. A year later, South Africa formed its National Space Agency, SANSA. In 2013, the Cape Peninsula University of Technology launched South Africa’s first CubeSat – a type of nano-satellite, known as ZACUBE-1.

And in early 2015, the Kondor-E satellite built for South Africa in Russia was launched into orbit. It provides all-weather, day-and-night radar imagery for the South African military.

Despite how useful satellites are it is worthy to note that they also have their limits. For instance finding persons kidnapped is very difficult using satellites. This is because the satellites only have a 2.5-meter resolution and satellites move from one location to another. This means that it can take about four days before the satellite can take the photograph of a particular location.

It would be a great idea if all African countries can have a satellite in space or better still if they can come together and have a space agency. However achieving this may not be fruitful in the next decades because space activities are capital-intensive projects and most African countries do not have the funds to carry out these activities.