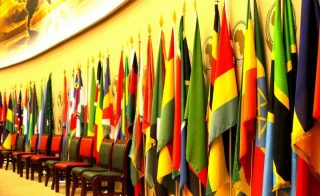 For more than half of the world’s population, the price war that was triggered by a break-up in the dialogue between the Organization of the Petroleum Exporting Countries (OPEC) and Russia, over proposed oil-production cuts, was the worse scenario to deal with as the fall in crude price began to set a tone for a global economic recession. No one knew that the price war which began on March 8, 2020, was nothing compared to a brewing pandemic in a Chinese city, Wuhan.

While the oil price crash caused many economies to revisit budgets and adjust spending, the COVID-19 (coronavirus) pandemic forced governments in the global economy to their knees. Even if 2020 was foreshadowed, most economies did not have systems in place to tackle the myriads of problems it came with. For Africa, the pandemic has created the need for its people to critically rethink and reinvent the future.

Reshaping the future of Africa.

On October 1, 2020, the Segal Family Foundation, in collaboration with Robert Bosch Stiftung organised a 1-day virtual summit, “Future Summit 2020”, with Africa’s future at heart. The summit created a space for a diverse global community of change leaders to deconstruct & reshape trends in Africa from many perspectives. Each speaker at the summit is drawn from a global wealth of leading voices who are already shaping their communities through significant efforts in their various fields.

During the 1-Day summit, conversations spanned across various economic sectors with a focus on crafting sustainable solutions with keynote speakers and panelists decoding Africa’s seemingly vague future. For instance, during a keynote address on the “Economies of the Future,” Professor Muhammad Yunus spoke extensively on the importance of the informal sector in the global economy and how little is done to enable players in the sector to access finance. Yunus is a Bangladeshi social entrepreneur, banker, economist, and civil society leader who was awarded the Nobel Peace Prize for founding the Grameen Bank and pioneering the concepts of microcredit and microfinance.

He defined the informal sector as the “micro-entrepreneurial sector” which practically survives on their own initiatives. According to Yunus, 70 percent of the global population belongs to the micro-entrepreneurial sector. The sector is critical to every economy and deserves to be celebrated. He further noted that although “entrepreneurship is run by money,” over 50 percent of businesses in this sector are not connected to banks.

In another critical segment titled De(re)constructing Africa’s relationship with the World, the panelists discussed extensively on how Africa should position itself in the global economy, narrowing the discourse to entrepreneurship. It was established that unless Africa gets its acts together, it won’t gain respect from the rest of the world.

Also, the term “entrepreneur” was redefined as not necessarily being a business person but a solution provider. That is, an entrepreneur could be classified as a person who is a competent critical thinker. According to Frederick Swaniker of African Leadership Group, “what we need in Africa is innovative entrepreneurship. Unless we are adding value, we will continue to be poor.”

It is high time for Africa to realize its potential and take responsibility for its future as dignity is what nobody gives to anyone. Rather, dignity is what one asserts. Lending her voice in the conversation, Tsitsi Masiyiwa, philanthropist and social entrepreneur called for Africans to take responsibility. “Let’s take responsibility. Let’s not wait for political leaders or western ideas to change Africa,” she said. Masiyiwa is the Founder and Co-Chair of Higherlife Foundation, a non-governmental organization which has supported over 250,000 children to access education services.

Segal Family Foundation is a philanthropic non-governmental organization founded in 2004 as on the belief that individuals and communities in Sub-Saharan Africa were just a few opportunities away from realizing stable, healthy, and empowered lives.

The Robert Bosch Stiftung GmbH, a charitable institution founded in 1964. It is one of the leading private foundations of Europe that is known for its promotion of natural and social sciences, including public health and science, education, society and culture, and international relations.