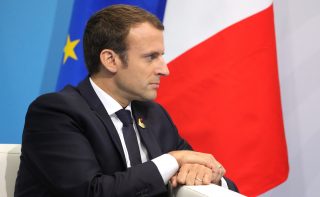 The President of France, Emmanuel Macron, will be visiting the New Afrikan Shrine, the traditional home of late Nigerian Afrobeat legend Fela Kuti. President Macron’s visit will make him the first leader of any country to visit the famed home of Afrobeats.

Macron will be announcing the launch of the Season of African Cultures 2020, an event which will be held in France. The cultural event is being organized by French television network TRACE in collaboration with ECOBANK.

The New Afrika shrine located in Ikeja in Nigeria’s commercial capital of Lagos state still represents, to many of Fela’s followers, his spiritual home. It was the place he launched his activism against authoritarian rule in Nigeria, and western colonization in Africa, he also stood against hegemonic organizations like the United Nations. And even though the original Afrika shrine was burnt down by in 1977 by Nigeria’s military government, the new one still garners much adulation as the former shrine built by Fela Kuti.

In this light, President Macron’s unprecedented visit to the shrine tomorrow represents some sort of turning point for Fela’s headquarters. Macron, by virtue of his office as the leader of the country which colonized most of North, West and Central Africa, while also repressing most of Africa’s culture, replacing them with French culture and language in an ideological policy infamously known as Assimilation, may not have been welcomed at the New Afrikan shrine if Fela was alive.

Macron and France represent the subject matter Fela frequently spoke against, like in his song “Teacher no teach me nonsense.” Macron promised a change in French foreign policy in Africa when he became president last year, and promoting African culture in this TRACE sponsored event, instead of French culture, is one way to do that.

The organizers of the Season of African Culture 2020, TRACE has an African station, TRACE Africa, dedicated to African music and videos, especially the unique music genre; Afropop, which is an offshoot from Fela’s Afrobeat sound. As an original French station, it has often bridged the gap between African, French and world entertainment.

Olivier Laouchez, co-founder and Executive Chairman of TRACE explained that tomorrow’s event will begin TRACE’s mission to change the perception of the African continent by encouraging contemporary African creations in music and culture. “TRACE’s mission is to support, nurture, cherish and celebrate Afro-urban music and cultures and to bring them to the world because we believe that the world can only benefit from a better understanding of the richness and the diversity of these cultures, which have long been undervalued,” he said.

Macron will be hosted tomorrow by Fela’s son Femi Kuti, who has continued in the tradition of his father as the heir to Fela’s Afrobeat and is also now patron of the New Afrika Shrine. More than a thousand guests will be at the TRACE event in Lagos tomorrow, along with representatives of the creative and art sectors of many countries on the continent. Nigerian female Afropop star, Yemi Alade and Cameroon’s Charlotte Dipanda are billed to perform at the event.