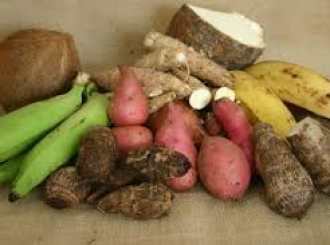 Why Dumping Local Diet For Foreign Cuisine Is Dangerous For Africa

“Africans are eating like the rest of the world, but what they are eating isn’t necessarily good for them,” writes Carlos Lopes, the Executive Secretary of the Economic Commission For Africa in his blog.

In the article, Lopes laments that white bread with jam and butter is overtaking local staples like traditional porridge, (pap or uji) as the new breakfast trend.  He posits that Africans must, for health and economic reasons, return to their traditional staples without which the struggle against hunger will continue. His article is published below.

Research shows that over the last 50 years Africans have dramatically changed their diet and are eating more of the same foods as the industrialized world. At least 18 African countries have changed more than 25 % of their diets.

Trends show that people are getting their calories from increased consumption of wheat, rice, corn, sugar and oil crops such as soybean and sunflower. There is also an increasing reliance on a limited set of crops for dietary requirements. People are eating less of the traditional cereals and root crops, contributing to a worldwide reduction in the consumption of 52% for sorghum, 45% for millets, 38% for cassava and 45% for sweet potatoes, over the last fifty years.

Agricultural practice has been metamorphosing. In 1961, the world was feeding 3.5 billion people from 1.37 billion hectares of cultivated land; today twice as many people can be fed from almost the same size of land. Quite a remarkable achievement given that in the 1960’s countries like India were on the brink of famine. Thereafter came the Green Revolution of the 1970’s and the technological boom of the 1980’s which made significant contributions to increasing crop yields and with it greater food production. Unfortunately there was no Green Revolution in Africa.

While beneficiaries of the Green Revolution were reaping bumper harvests, Africa, became a net importer of agricultural products, despite its massive agricultural potential. Consumption of grains like rice, maize, wheat and livestock products including dairy and meat, increased, between 1980 and 2007. These accounted for at least 50% of Africa total food imports while consumption of traditional cereals reduced. There were some exceptions of course. For example, Ghana’s diet remained relatively diverse and traditional. A contributing factor was the fact that during the same period of the mid 1980’s, Ghana raised food production per capita by more than 80%. Food supply grew faster than the population! making it largely self-sufficient in staples such as cocoyam, cassava, sweet potatoes and yam. In fact it ranked amongst the top five performers in the world for agricultural growth.

Factors such as rapid urbanization, demographic trends and trade liberalization have influenced what the majority of African’s eat today. For instance, currently more than 40% of the population live in urban areas. Urbanization is growing at a rate that is more than twice the world’s average. The middle class is also growing, tripling over the last three decades. Middle class purchasing power capacity, life style change and consumer trends play a big part in the type of food that is put on the table. A big part of this new pattern is food that is packaged, fast, imported and processed.

Trade liberalization and globalization of food systems have broadened consumer choices transforming traditional African diets to include more calorie-rich and energy dense types of foods, characteristic of developed countries with greater availability of meat and dairy products, non-traditional cereals and heavily processed foods. Transnational food corporations such as Nestléand Kraft have been quick to see the economic benefits of operating in Africa’s populous countries and servicing a rising middle class ready to spend. When supermarkets start to appear everywhere, offering readily available processed foods on their shelves, some offering 24 hour service we know the message is clear.

Rapidly growing fast food chains such as McDonalds, KFC, Wimpy, or Africa’s own giants from Debonairs to Nando’s, from Steers to Kilimanjaro, are providing accessible dining options to suit all palates and most wallets, from a McArabia in Marrakesh to Chicken Jollof pizza in Nigeria. Despite the fact that a KFC meal costs 40% more in Africa than it would in Brooklyn or 80% more than it would in Shanghai, it comes as no surprise that the youngest region in the world also goes for it. Youth’s preference to fast food is well known. Fast food sales have been quick to take off and are still growing. For instance, it was only 19 years ago when McDonald’s entered the South African market, today it has more than 200 outlets and is considered one of the most successful markets in McDonald’s international history.

What is at stake?

Over-nutrition has become as important for public health as under-nutrition. The health consequences accompanying Africa’s diet transition are enormous following the challenge other regions faced before. Non-communicable diseases like cardiovascular diseases, diabetes, and cancer linked with the growing African middle-class lifestyle and diet are escalating. In South Africa obesity has risen to a level higher than the United Kingdom. A recent study published by Lancet found that more than half the women in Botswana and one in eight Nigerian men are obese, while Egypt is experiencing one of the fastest obesity rises among women. Further the World Health Organization has projected that Africa will be the hardest hit region for non-communicable diseases deaths by 2020. If not managed, Africa could eat its way to a looming health disaster that will come with its own set of economic and social consequences.

The increasing homogeneity of crops and failure to sustain local foods is a threat to food security. Less variety and greater uniformity of high yielding crops that are grown over large areas make the global food supply more susceptible to risks such as pests and disease and climate change. Despite lessons learned from the Irish potato famine in the 19th century, dependence on monocultures persists. Take for instance, the stem rust epidemic that swept across North America’s wheat belt in the 1950’s, then hit Uganda in 1999 and hit Germany recently. Or the humble Cavendish banana which could disappear if the Tropical Race 4 strain of Panama disease, now in Mozambique, continues to traverse the globe,  ravaging crops. With no back-up banana variety to feed the world, little thought has been given to the  peoples in Uganda, Gabon, Ghana and Rwanda who rely on bananas and plantains for more than 300 calories per person each day, or about 16% of the UN’s nourishment recommended threshold.

As long as Africa’s population continues to grow and the pressure to grow more to feed more increases, there is no choice but to find new substitutes and to diversify food sources. What can be easier than going local? Reverting back to traditional and diverse diets would help fight many diseases and food insecurity.

With regards to food security, Africa is home to over 874 million hectares of land suitable for agricultural production. With less than 10% percent of arable land currently being used for food production, there are windows of opportunities to expand this to increase local production of crops. Only 6 % of the arable land in Africa is irrigated, yet the continent has the potential to irrigate nearly 40 Million ha (10 per cent) and boost agricultural production by 50%. An immense untapped agricultural potential can make a difference. It is true that African countries have yet to make significant progress towards adding value to primary agricultural commodities. All African countries account for less than 10% of global value addition and it’s ratio of trading cost to production is 12%, compared to 4% for Western Europe, or 7% for Latin America.  With the right investments and private public partnerships in research and development, genetic diversity and nutritional quality of locally grown crops can be ensured. Modern farming and agribusiness are needed to boost the traditional food supply chain and the food retail sector.

Increasing production of local foods could lead to reduced costs. Perhaps more countries should learn lessons for Nigeria’s Cassava Inclusion Policy which promotes composite bread flour made up of cassava and wheat flour creating a healthier loaf. The effect is to cut wheat imports by introducing a cassava flour inclusion. Domestic production and processing of Cassava has been stimulated and jobs are being created.

Future food policies will only be effective if they are developed in coherence with and input from both the agricultural and health sectors. Aggressive public awareness is needed for healthier diets. Lessons can be borrowed from South Korea, which launched a large-scale public education campaign 20 years ago to turn around obesity rates by promoting traditional foods, which were low in salt, fats and oils and high in vegetables.

The Bayaka say that an abundance of food at your neighbour’s house will not satisfy your hunger.