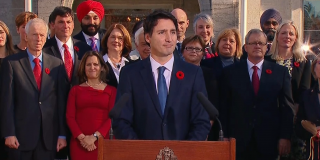 In the last few months, Canada has been in the media spotlight for one major reason – Justin Trudeau. Since the 43 year old won the federal election on the 19th of October to emerge Prime Minister, the media can’t stop buzzing about him, for all the right reasons, his family legacy, his good looks, his charming personality, the fact that he’s bilingual, and a self-professed feminist, amongst other things.

Just when the hype around Trudeau seemed to have simmered down, the world’s new favourite leader (move over Obama) is making another round of headline news because of his new cabinet, which he said “looks like Canada”.

Nigeria definitely has a few things to learn from the Northern American country.

It is clear that several countries around the world have embraced the shift from the older to the younger generation in terms of leadership. There is also a more compelling argument that Africa could be better off with younger leaders.  Citizens want fit, brilliant, young leaders with fresh ideas and not a recycled bunch, such as Nigeria’s President Buhari and his potential ministers.  Nigerians should please have this in mind for the 2019 general elections.

Barely 16 days after he emerged winner of the country’s federal election, Trudeau already unveiled his cabinet; one of the most impressive cabinets of any political administration one can think of.

But in Nigeria, almost six months after President Buhari was sworn into power, he is yet to present his cabinet to disgruntled Nigerians who are tired of his tedious pace and underwhelming list of ministerial nominees. Because of this, he has aptly been dubbed “Baba Go-slow”. Perhaps, Nigerians are just impatient, Buhari already explained that his age might be a barrier to the quality of his performance in office.

President Buhari has been accused of being gender-biased after he submitted a ministerial list containing just three women, and 17 men. During his campaign, the president did promise to implement the National Gender Policy, which allocates 35 percent of appointive positions for women to bridge gender gaps in political representation in both elective and appointive posts at all levels.

Having openly declared, “I am a feminist”, and promising to design a cabinet with equal gender representation, Trudeau unveiled a cabinet of 30 – 15 men and 15 women – on Wednesday the 4th of November, making good on his promise.

If Buhari loathes the past administration so much that he has refused to take a cue from ex-president Jonathan (who increased female participation in politics from 10 percent in 2011 to 34 percent by 2013), then he should give Trudeau a call, and get first-hand lecture on how important it is to stick to campaign promises and how to implement the National Gender Policy. “Because it’s 2015,” Buhari.

Creating a diverse and competent cabinet

More than creating a gender-balanced cabinet, Trudeau’s cabinet is a diverse mix of truly remarkable individuals that cut across different tribes and religion. As it appears, South Asians, Muslims, refugees, the physically challenged, and Aboriginals all have a seat at Canada’s political table. This means a balanced representation for the diverse people in Canada.

President Buhari has arguably been criticised by a number of Nigerians that his appointments are lopsided, with a concentration on Northerners. But certain people like Reno Omokri, a former special assistant to President Jonathan, have supported his appointments saying if the president’s appointments are based on merit, then he’s free to concentrate on a region. Omokri does have a point, it is definitely meritocracy over ethnicity, but aren’t there competent people from the south of the country that are fit to be in these positions?

Worse still is Buhari’s disappointing defence to the accusations of being ethnic biased; in an interview with BBC Hausa, Buhari implied that his appointments were a reward for loyalty, “If I select people whom I know quite well in my political party, whom we came all the way right from the APP, CPC and APC, and have remained together in good or bad situation, the people I have confidence in and I can trust them with any post, will that amount to anything wrong? I have been with them throughout our trying times, what then is the reward of such dedication and suffering?”

Has it never occurred to Mr President that the supposed loyalty of his party members were all a calculated move for “the reward,” these are politicians after all. And now that they have been rewarded, are they willing to accord the Nigerian people true dedication and commitment, or just enrich themselves for all the “suffering”.

Hopefully, Nigeria and its President can walk along the Canadian-Trudeau path in the near future.