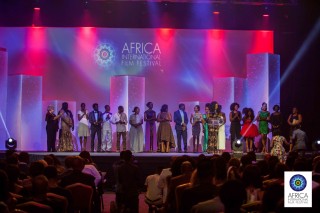 Five AFRIFF 2016 students gush about their experiences, and 15 others prepare for further training in the US next year

The young and upcoming stakeholders in the Nigerian film industry who were selected to be students at the 2016 Africa International Film Festival (AFRIFF) Talent Development Training Workshops are arguably some of the most excited and motivated students in Africa this year. From the 14th to 18th of November, burgeoning – and already working – scriptwriters, actors, and filmmakers experienced filmmaking in totally refreshing and inspiring ways, that went on to make the training a great way to round off 2016, and present them with a positively empowered outlook for 2017 and the future.

Lois Emmanuel, Tope Olowoniyan, Jennifer Eneanya, Richard Ofoe (Ghana), and Umanu Elijah Ojochenemi are a few of the trainees who cannot emphasise just how much the training has impacted them and their respectful careers. Presently, they, along with the rest of their fellow trainees, are poised to use the knowledge and experience garnered at the AFRIFF training to not only develop their personal artistic talents, but to contribute their quota in making the Nigerian film industry truly world-class.

For five days, 150 of these students from different African countries were put under the expert and watchful tutelage of Nollywood veterans in the Afrinolly Space at Oregun, Ikeja, Lagos. Their instructors – Tunde Babalola, Hilda Dokubo, and trainers from Canon DSLR – ran them through courses on the fundamentals and essentials of their various fields, with a joint Social Justice Filmmaking masterclass taught by representatives of the Montana State University taking place on the final day.

Although not all of the students could go on to become beneficiaries of the AFRIFF/Ford Foundation Scholarship to further their training at the Montana State University next year (because only 15 trainees are selected each year), it did not deter them from expressing their joy and gratitude at being a part of something so intrinsically rewarding for them.

“AFRIFF for me was a wonderful experience. Because apart from the knowledge I had in school about theatre and acting, getting to learn under Hilda Dokubo was a very good platform for me. Because learning from a veteran… there’s nothing like that. Really. And she opened my mind to understand the different techniques to acting, the different scholars’ approach.

She taught us a whole lot of things, I must say. Things I would definitely put into practice – I have already started putting it into practice! Because I have gone to work after AFRIFF. I’ve seen a new dimension to acting. It has increased the passion and the drive, because we learn about how to act every day. We improve on our skills and our ability to recall.

Generally, the whole AFRIFF experience was a great one. I had high expectations, and the training actually did supersede them. And it’s definitely something I wouldn’t forget in a hurry.”

Jennifer Eneanya (The Business of Scriptwriting)

“For me, the AFRIFF training has been a long time coming. I was supposed to attend in 2014 but there were matters arising that made that impossible. So fast forward to 2016. And I was ready.

To tell the truth, I have attended a screenwriting training before. But this… this was different. It wasn’t just about the technicalities – which were terrific; I remember cringing when the mistakes I had made in earlier scripts where mentioned – but it was also about the business of it all, and gaining some WRITERS’ PRIDE.

I was captivated by our instructor, the very amiable Tunde Babalola, and I soaked in as much as I could in the space of five days. Yes, I may have asked quite a lot of questions, but there was simply so much to learn!
I have been challenged and re-energized and I am pouring this new wealth of knowledge into my scripts and writing for the love and the business of it!

Ah yes! #JesusDidIt too, and I was chosen as one of the Ford Foundation scholarship winners! Ecstatic, excited and eager to see where this all leads before, during and after the training next year!

Shout out to AFRIFF’s amazing team, the amazing Chioma Ude (I want to be like you when I grow up), Mr Tunde of life, and the AFRIFF 2016 screenwriting class… y’all rock!

“It was a good experience having to meet with other filmmakers who are passionate about the craft and having someone from Canon taking us through the whole process of DSLR and filmmaking. Even though I had some practical knowledge of camera operations, I still discovered that there were lots of things that I was not really taking into consideration while I was doing most of my shoots. But the Canon training has exposed me to lots of things that I should put into serious factor whenever I’m shooting.

While in the filmmaking class with the facilitators, I actually learnt some basic things in the aspect of camera settings; things like the usage of shorter speed, aperture and ISO setting. These were things I used to take for granted, but from the lectures and interactive sessions, I discovered that these settings do affect the picture at the end of the day. From what I’ve learnt now, I won’t want to go to the old ways but to do something better as I have learnt during the AFRIFF/Canon classes.

Lois Emmanuel (The Business of Scriptwriting)

“In the first place, getting accepted with a story I wrote just for fun gave me the special confidence that ‘I am not the worst of the lot’. It told me I had potential and I should go for it. I learned that you can never know it all. And knowledge of the business side of whatever talent you have is what sets you apart from the rest. I also learned that when you open up yourself to people, you get what you give most of the time, you give love and acceptance, you get love and acceptance.

After AFRIFF, I definitely appreciate my craft and my worth as a writer and creator more. I also know now that I can dream much more than I thought I could as a writer, and if I work hard enough I’ll get there.”

“AFRIFF gave me a wonderful opportunity to meet up with international filmmakers to share ideas and experiences. It broadened my horizon in the art and business of filmmaking. AFRIFF gave me the opportunity to showcase to the world what stuff I’m made of. The experience gotten from AFRIFF is not comparable to any I got. Even in film school.

My little issue with AFRIFF is the period for learning and assessment. I feel the period is too short to be able to fully comprehend whatever is being taught and to be assessed on it. However is kind of the best thing that ever happened to me, and I will love to be a part of it umpteen times.”

“My 2016 wouldn’t be complete without AFRIFF. It’s d best thing that happened to me this year. I’ve been making films before now, but AFRIFF made me understand what I’ve been doing is ‘trial and error’. I was able to understand the DY/DX of filmmaking and the theoretical part of cinematography. I’m indeed grateful for this golden opportunity in contributing to my film career. God bless AFRIFF. God bless Nollywood.”

Besides the filmmaking students’ praise for Canon’s contribution, the partnership with AFRIFF – the first of its kind in Nigeria/Africa – remains a very crucial and appreciated aspect of the training, based on the cutting-edge professional technology used internationally that it provided, and which according to Katie Simmonds, Canon’s Strategic Operations Professional, underlines the company’s focus on supporting Nigeria to build the next generation of talent who will drive the growth of the country’s television, film and photography sectors.

Founder and Executive Director of AFRIFF, Chioma Ude, along with her thanks to the Ministry of Information and Culture, Access Bank and Air France for their incessant support, notes that the crucial component of the festival is the training it provides to the young minds of Africa.

“We’ve trained over 1,300 of those minds in our free workshops, as we continue to emphasize that AFRIFF should, and must educate as much as it entertains. With AFRIFF, we will continue to infiltrate the minds of both the young and the old, illustrating the significance of the film industry as a profession in Africa, and we will remind our global audience that WE ARE HERE and as long as we live we have a story to tell.”

Over the past six years, AFRIFF has covered three cities and had over 20,000 visitors, of which 30% have been foreign. Each year, the global invitation to the world fixates on exhibiting the large diversity of ethnicities, cultures and languages on our continent and combatting the absence of authentic African subjects in film.

Luckily, the festival provides an enabling pace for young, creative, and passionate minds to ensure that this continental goal for the film space is met.