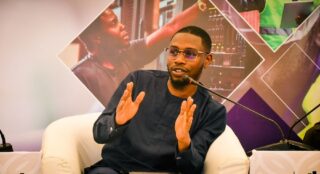 First Person: How a series of side hustles led Bernard Parah to create a Bitcoin startup

Bernard Parah became a first-time founder in 2020 when he started Bitnob — an app that helps users save and transact bitcoin. However, it wasn’t his first foray into entrepreneurship; he has been knee-deep in it for over a decade.

In this article, the first of a new Ventures Africa series – First Person, Parah takes us into his backstory, showing how he went from always having side hustles to discovering bitcoin and the leap of faith to build a startup.

Let me tell you where it all started. I come from Jos. I grew up and spent most of my life there until 2013 when I left for Ghana. My childhood was between Jos and Abuja because my dad was working in Abuja. Sometime between 2010 and 2011, I got into the University of Abuja. I wanted to study computer science, but that’s not what I was offered. So I dropped out about a year later, returned to Jos, and did nothing for two years.

Not exactly nothing, anyway. Basically, I went back to the streets and did a lot of odd jobs because “how dare you drop out of school in Nigeria?” My parents were like, “Oh! So you dropped out? You’re on your own now.” My dad never wanted me to study computer science because the only possibility he could see was running a cyber cafe. He wanted me to do medicine instead.

I arrived in Ghana with doubts in my head. I didn’t know if I could get good grades and make money simultaneously. Since 2009, when my family ran into financial difficulties, I had to grow up early to support them since I had four siblings. And now, in school, I had to make sure they were covered. My father didn’t know I was there to study computer science because we were still not in agreement. I told them at home that I was doing mechanical engineering instead. Now, you’d wonder why I was so stubborn about computer science. I’ll explain.

I have always been a computer geek. Back in 2006/2007, when Symbian phones were in vogue, I was one of those guys who could bypass the internet for free browsing. It was a big deal then. I also knew how to fix phones and laptops and install and use Excel and Word. When I was at the University of Abuja, I spent more of my time with the Computer Science students. My strength was clearly with computers, and I couldn’t see myself doing something else.

The result of all this is that I always had side hustles. I needed them. In Abuja, it was printing and helping students with their projects. In Ghana, I started taking coding gigs. I joined several online groups for developers, and I was in other forums where I helped people resolve computer-related problems. It later turned out that one of the people whose questions I kept answering, worked in one of the biggest PR agencies in Ghana. He was surprised to discover that a student was resolving many of his company’s problems. He invited me to their office, and what followed was my first big break in tech.

But again, that wasn’t all I was doing. In November 2013, I discovered Bitcoin. At that time, I just thought it was a cool way to make extra income. People basically traded it the same way as gift cards, and most of the trade was happening on WhatsApp and Telegram groups. The business was simple, and I wasn’t looking to make any changes.

But in 2016, something interesting happened. The central bank governor blocked the use of naira cards abroad. So many of us Nigerians in Ghana couldn’t transact with our naira cards. That was when bitcoin’s utility started becoming a bigger deal. I started using bitcoin to help people move money between Nigeria and Ghana with P2P trading. We had a bitcoin community holding bitcoin programs in Ghana. Trust started growing. At a point, we were moving around the streets of Accra carrying the equivalent of $50,000 in Ghana cedis in bags to trade with someone who needed bitcoin. But this was still a side hustle. I was a software engineer full-time.

Eventually, the market started maturing, and people began creating bitcoin websites. So, the demand for developers who understood bitcoin started growing. That led many people to me, and I was taking contracts.

In 2017, I had an epiphany. I realised that the crypto industry would be much bigger than most people expected in the next five to ten years. People did not yet understand it. By the time they do, developers that understood crypto will be scarce and in high demand. I wanted to be among the top ten developers that would come to mind when that time came. So I quit my job and focused more on blockchain engineering.

That same year, I met Ryan Strauss in one of the crypto groups where I had been active. After we hopped on a call, he said, “You seem to know a lot about the industry. Why are you not yet running a formal business?” I wasn’t interested in doing that till he said, “Dude, you already have a business. You just haven’t structured it.” It was after that conversation I registered bitnob.com.

It was just a simple website for people to order the amount of bitcoin they wanted to trade. I was still meeting people physically to exchange bitcoin for money on the streets of Accra. But it still wasn’t a full-time thing.

In March 2018, I came back to Nigeria during the bear market. I met with an old friend and told him about Bitnob. He wanted to invest in it, so we discussed what we could do with Bitnob. But at this point, it was starting to become apparent that not being into this full-time was a problem. It didn’t have my full attention.

In 2019, my team and I tried building a non-custodial wallet — like Trust Wallet. But it didn’t take off as we wanted. Then we tried creating a kind of digital àjo for cooperatives. We were supposed to launch that product in February 2020, but then I called my team, and we agreed that Bitnob was our best shot at making an impact. The only reason it hadn’t taken off then was that we had not completely focused on this idea.

So I suggested we shouldn’t take consulting or freelancing jobs for at least one year. If we fail, we’ll at least know we tried. But if it succeeds, this could become really big. And these crazy guys actually agreed. People quit their jobs to focus on Bitnob.

It was a tough choice for everyone, but today I’m glad we took that leap of faith. I won’t deny that we still have challenges and moments when we feel like quitting. When I dropped everything, it was like a part of me had died. I had to cut off some of my friends who always had many ideas. I didn’t want to get tempted to start something else.

Building a bitcoin startup in Nigeria is as tough as you can imagine. A Nigerian bank only has to worry about a few competitors. But in crypto, everyone is a potential competitor. Then you have to gain trust in a low-trust and impatient market. Yet, Nigerians want to make money quickly. It’s a lot. Sometimes, it feels like a thankless job. But, on the other hand, knowing that Nigerians will go to any length to have their problems solved encourages me. As long as I understand their challenges and how much they would pay to solve them, I have a market. Even when global players come to compete in this market, I know they don’t understand this market as well as I do.

Building Bitnob has changed me a lot. I believe more in intense focus than doing many things at once. It helps to get results faster. So even when I fail, I fail fast. In the future, I see myself exploring other fields outside tech: agriculture, sports, social intervention, etc., and I know better how to start venturing into them because I chose to build one business.