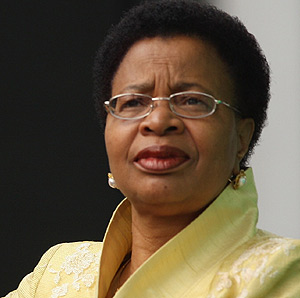 Graça Machel is a most remarkable woman. In her career spanning over four decades, she is best known for her work in education and child development. Uniquely, she is also the only woman to be the First Lady of two different countries! Mozambique and more recently, South Africa.

Yet her work and achievements began long before assuming her role as Mozambique’s First Lady. Graça was born in rural Mozambique during the era of Portuguese colonialism. She attended Methodist mission schools in Mozambique and for her academic excellence she received a scholarship to study at University of Lisbon, Portugal. She became fluent in English, French, Spanish, Italian, Portuguese and Tsonga, her native language. It was at university that Graça became involved in the independence struggle.

She moved back to Mozambique in 1973 and joined the Mozambique Liberation Front party (FRELIMO) to fight for the nation’s independence, which was eventually won in 1975. Graça’s work as the Minister for Education and Culture began. During her tenure, she succeeded in raising primary school enrolment in the nation to over 80 per cent of school-age children, double the original enrolment, an incredible achievement in line with Millennium Development Goals. She also married Samora Machel, Mozambique’s first president. He was eventually killed in a plane crash in 1986.

Mozambique, like many African nations, went through significant political turbulence over the years with intense conflict between the ruling party and opposition, supported by external governments. This created an environment where children and women were increasingly devastated by war and its effects. In response to the destruction caused by the conflict, Graça  Machel became the President of Foundation of Community Development and Chairperson of the National Organisation of Children of Mozambique, an organisation that places orphaned children in village homes. Her national success led to her appointment as the President of the National Commission of UNESCO in Mozambique and a host of other international positions.

Most touching perhaps, is her work as the leading expert on the UN Report on the Impact of Armed Conflict on Children. From war-torn Sudan to post-conflict Congo, every African has been touched directly or indirectly by war and its effects. Graça travelled to various sites including Angola, Lebanon, Rwanda, Sierra Leone and former Yugoslavia to research the lives of those most affected by war, especially women and children, in an attempt to accurately tell their stories and mobilise the political will to empower them. In her own words:

“I have spoken to a child who was raped by soldiers when she was just nine years old. I have witnessed the anguish of a mother who saw her children blown to pieces by land-mines in their fields, just when she believed they had made it home safely after the war. I have listened to children forced to watch while their families were brutally slaughtered. I have heard the bitter remorse of 15-year-old ex-soldiers mourning their lost childhood and innocence, and I have been chilled listening to children who have been so manipulated by adults and so corrupted by their experiences of conflict that they could not recognize the evil of which they had been a part.” (UN Report on Impact of Armed Conflict on Children, 1994: Personal note)

Moving words from a passionate woman. It is my private belief that no one can engage in such work and not be irrevocably changed. Whether negotiating in politics or in fighting for the rights of women and children, Graça’s purpose remains unchanged, “It is the meaning of what my life has been since a youth – to try to fight for the dignity and the freedom of my own people.” (BBC Profile)

She has since continued to work on many issues of child rights and development as well as empowering African women. Her recent activities include leading the New Faces, New Voices (NFNV) network of African professional women in business and finance, who are working with African Development Bank to promote financial-inclusion agendas, a way of making funds accessible to female entrepreneurs in Africa. She has received numerous awards for her work including the 1992 Africa Prize, 1995 Nansen Medal from the United Nations for her work on behalf of refugee children and the Global Citizen Award of the New England Circle in 1997. She is also the first African woman to be conferred with Dame Commander of the Order of the British Empire (DBE) award and a member of The Elders, a group of global leaders committed to working together for peace and human rights.

Graça Machel is indeed a remarkable woman. Her contributions to her country and to African children and women as a whole continue till today. In 1998, she married the well-loved former president of South Africa, Nelson Mandela becoming the first and only woman to serve as First Lady of two nations. She continues to spend time in both South Africa and Mozambique.

Telling this one woman’s story is actually a telling of the stories of millions of women, each one touched by Graça. By employing the power of social change and entrepreneurship, she continues to change lives today. A firm believer in every individual’s value and ability to bring about change, Graça Machel’s charge to us from the 1994 report was, and still is “ask yourself what you can do to make a difference. And then take that action, no matter how large or how small.”