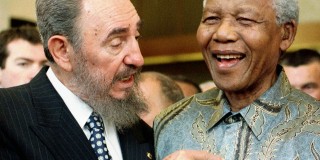 #FidelCastro: Why Africa’s love-in with the revolutionary is very naive

Fidel Castro is dead. Call him whatever you like: revolutionary, leader, dictator, beneficent, anti-imperialist, human rights violator. One thing is sure, his life cannot be described in black and white paradigms; there are many shades of grey, very many shades.

The United States for so long controlled the media, and hence any story coming out of Cuba. The world knew him as a dictator, no, a tyrant (his daughter called him that) who clamped down on dissent by murdering and imprisoning many in the opposition.

What was not said was that, and this is no justification for their deaths, some of the opposition had been enriched by the overthrown regime. There were more than 600 assassination attempts by the CIA on Fidel Castro’s life. Despite the embargoes and restrictions placed on Cuba, it has arguably the best education and health systems (free healthcare for all, even though Cuban doctors are some of the lowest paid in the world). He assisted in freeing some African countries from Western imperialism.

And for the latter reasons, Africans love him. Going by reactions to his death from Africans and their leaders since yesterday, there seems to be some kind of naivety somewhere in there. As much as he helped to free countries from dictatorial regimes, he helped in installing others, because of shared Marxist-Leninist values.

Much has been said in the past 24 hours about his interventions in Apartheid Southern Africa. However, no one seems to be talking about Southern Africa being a pawn in the proxy cold war between communist Cuba and Russia, and the imperialist United States. Cuba prevented Apartheid South Africa, supported by the West, from gaining control of Angola. He then helped cement Jose Eduardo Santos as Angola’s president for life. It was more about cutting the arm of the United States in Angola than actually caring about Africa. No irony could be more than this: Cuban soldiers helping Eduardo Santos protect American owned oil-companies during the Angolan war to continue the steady stream of funds required to sponsor the war.

Nelson Mandela’s much vaunted statement about “your enemy is not my enemy” is just that, a statement. Your enemy’s enemy is not your enemy, but neither is he really your friend. There are really no friends or foes, just vested interests. The most direct relationship between Cuba and South Africa was Angola (and that brief time Mandela was taught guerrilla-type warfare ending in his imprisonment). Apartheid South Africa began to lose its regional power when it lost the Angolan war, fast-tracking Mandela’s release from prison and the end of Apartheid.

Castro’s “friend of Africa” title can’t be farther from the truth. Ethiopia, Somalia, Congo and Zimbabwe are few of the countries that wouldn’t really refer to him as a friend. He helped cement a dictator, Mengitsu Haile Mariam, in Ethiopia. Mengitsu engineered a famine and killed thousands of his own people and also killed Somalis on their lands too. Castro helped Laurent Kabila, whose son Joseph Kabila is currently refusing to give up power in Congo. Mugabe ran communist propaganda, inspired by his friend Castro, for so long that Zimbabwe’s current economic woes echo even in alternate universes.

There was no anti-imperialist friend of Africa; there was only a communist revolutionary who found kinship in whoever was communist in Africa. He really didn’t care about black people; human rights abuses on black Cubans are evidence of that. Africa, as usual, was caught between imperialist propounded “democrazy” and disguised new masters in communism. Democracy is becoming a farce; look at Donald Trump and Brexit. Communism ended with the fall of the Soviet Union in the 80’s. It is time for Africa to learn to stand on its own two feet. No-one is your friend, no-one is really your enemy; there are only interests.