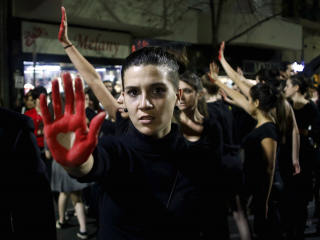 #BeatingWomenisHappiness is a sickening symptom of femicide in Latin America

“The difference in Guatemala between the death of a man and the death of a woman is that the woman is raped before she is killed, she is mutilated … This does not happen to men … It is clear to see how misogyny is present up until the moment of a woman’s death,” Thelma Aldana, the Attorney General of Guatemala said to InSight Crime regarding violence against women relating to gang cases.

In Latin America, the institutionalisation, and normalisation of patriarchy and misogyny can be found in the everyday life of women who are hounded down, raped and mutilated in their numbers for the crime of being a woman. This phenomenon, of being hounded and killed is described as femicide (a crime involving the violent and deliberate killing of a woman). The rules of femicide and other forms of violence against women states, that whoever you are, which every work of life and however important you are, if you are a woman, you will be subjected to hate crime.

In Mexico, December 2016, a Mexican Senator Ana Gabriela Guevara, 39, was beaten to a pulp and hospitalised after being beaten up by four men. Ms Guevara who was riding her motorcycle when she collided with a car. She was thrown off her bike and then four men came down from the car, hit her bike and beat her senseless, hitting her in the ribs and head. She said the men had insulted her for being a woman and a motorcyclist.

Ms Guevara organised a press conference to state that the attack was gender-motivated, calling it “cowardly” and “vile”. The attack was so serious that she had to have surgery to put a plate on the right side of her face. But this attack will come as no surprise as Latin America has become a hotbed for femicide and violence against women. Shortly after Ms Guevera’s attack, twitter users started trending a hashtag–#GolpearMujeresEsFelicidad (#beatingwomenishappiness). One user tweeted, “If she doesn’t make you a good sandwich beat her #beatingwomenishappiness.” Another tweeted, “If she broke your heart, break her face #beating women is happiness.” The hashtag is despicable and reveals how cowardly men have taken violence against women beyond culture and have turned it into a hobby, hence the sickening idea that “beating women is happiness”. This hashtag also proves the feminist narrative that women get the blame for the actions of violence and sexist behaviour of men is not a myth, but reality.

Every day in Mexico, seven women are killed and 1200 are assaulted. Between the years 2012 and 2013 over 3,800 women were killed in circumstances relating to gender violence. Out of these 3,800, 613 cases were investigated and just 1.6 percent ended up with a judicial sentence. But Mexico isn’t the only country that suffers from femicide and immunity of these criminals who perpetrate the crime.

Amongst the 32 countries where femicide most frequently occurs, Latin American countries represent 17 of them. In Guatemala, which is amongst the Latin countries with the highest numbers of femicide, between April 1, 2015, and March 31, 2016, a total of 262 cases of femicide were reported, which was a drastic rise compared to the 198 reported cases the previous year.

According to the Economic Commission for Latin America (CEPAL), in 2014, in Peru, 83 women were murdered by their partners or former partners; 71 in the Dominican Republic, 46 in El Salvador, 25 in Uruguay, 20 in Paraguay. And these numbers just like that of Guatemala, saw a rise as the years went by. The rise in femicidal numbers in these countries was followed by poor investigation and a very low number of sentences. This means that in Latin countries, women are not protected while the perpetrators of crimes against them are given immunity, aided by laxity in the system and lack of empathy from the authorities who are not doing enough to curtail violence against women and to prosecute the perpetrators of the crime.

In Mexico and across Latin America where violence against women is prevalent, there have been mass protests demanding authorities do more to protect women from aggression.

Femicide is the last straw of gender-based violence, which has levels, from verbal abuse to molestation, rape, death, and to immunity for perpetrators whose crimes are not investigated because they are shielded by weak justice systems.