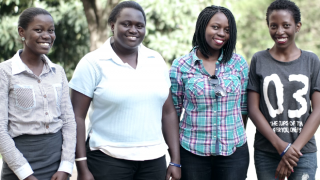 Made in Uganda: an app that detects vaginal bacteria

Three days ago, Africa welcomed yet another ingenious innovation  from a team of five phenomenal females – Team Code Gurus. Team Code Gurus is a group of five students from Makerere University in Uganda who successfully created the BVKit, a test kit to detect harmful bacteria which causes bacterial vaginosis, and a host of other infections in women.

The kit is a combination of a hardware and software and works with a Bluetooth medium. The hardware detects PH levels in urine and relays the readings to the application via Bluetooth. “We get value of a urine sample or vaginal discharge sample, and send PH values via Bluetooth to the software. The software gives you the exact values and lets you know whether you have healthy or unhealthy vaginal bacteria,” explained Nanyombi Magni, project leader. This test alone is laudable, and would seem enough, but that’s not all.  The application further tells you whether or not you should see a doctor and where you can find the doctor.

The idea of the BVKit is simplicity and availability. The process is so easy, women don’t have to visit labs or hospitals to run tests. “You can run tests on yourself every once in a month, to make sure that your bacteria is okay and that you are not developing anything that you shouldn’t have,” said the programmer, Ndagire Esther.

The group plans to market the kit through NGO’s, clinics, and pharmacies, with a focus on women in the rural areas. “We hope that NGO’s can help us reach rural areas where women who don’t have the opportunity to test the bacteria, will be able to use our application.”

The kit brings hope to the continent, especially in countries and areas where health education remains a challenge. Bacterial vaginosis (BV) is one of the most prevalent vaginal infections among women in Africa. In pregnancy, certain complications such as a miscarriage, preterm delivery, premature rupture of the membranes, and after-delivery infections could ensue from BV. In Uganda, a study into bacterial vaginosis amongst women considered to be high risk for HIV showed that 88 percent of the women involved, tested positive for bacterial vaginosis at least once during the course of the study.  And in Nigeria, several studies have shown that BV is prevalent amongst pregnant women ages 20 – 25.  “If we can touch the life of one woman, then that’s enough,” clearly, from these statistics, quite a number of African women would benefit from this innovation.