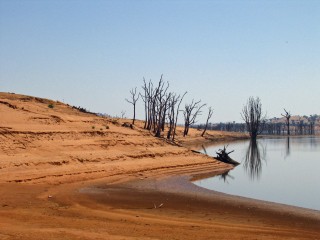 As the president of the Democratic Republic of Congo, and presiding chairperson of the African Union (AU), Félix-Antoine Tshisekedi Tshilombo focused his United Nations General Assembly speech on the disproportionate impact climate change will have on Africa in the years to come. Tshisekedi’s remarks, coming on the last day of the annual summit at the UN’s headquarters in New York, spoke to the immediate challenges of the pandemic for the African continent but also sought to bring attention back to the urgent need for resources to drive a collective African and international response to climate change.

African economies, which as a whole contribute far less to global warming than their counterparts in Europe, Asia, and the Americas and generate only a fraction of the world’s carbon emissions, are nonetheless set to suffer disproportionate consequences from rising temperatures over the next decade. As Tshisekedi reminded his audience of global leaders: “for Africa, the year 2030 will be marked by a drop in GDP that could go up to 15 per cent, a reduction in agricultural yields, and a sharp increase in the risk of flooding in coastal areas and island countries.”

Faced with the fundamental injustice of climate change and its implications for their citizens and communities, countries across Africa are taking proactive steps to mitigate its most dire consequences. Tshisekedi’s own Democratic Republic of Congo (DRC) produces only 0.09 per cent of global carbon emissions but ranks 177 out of 181 countries for climate vulnerability. To prepare for the impact of climate change on the capital city of Kinshasa, a major investment programme dubbed ‘Kin Elenda’ aims to improve the quality of life for residents by spending $500 million over five years from the World Bank’s International Development Association (IDA) in the form of credit and grants to make the capital more sustainable and resilient in the face of climate change. The funds directed by Kin Elenda, and the projects they will support, will directly benefit over two million of the most vulnerable citizens of Kinshasa, improving household water connections, reducing exposure to flooding, and increasing green urban spaces.

In other parts of Africa, comparable opportunities to mitigate the effects of climate change require international financing and political willpower. A study published this past July by the ​​United Nations Environment Programme (UNEP), for example, found that the financial and environmental benefits of restoring the savannah and grasslands around South Africa’s Thukela River basin would not only improve productivity and water supplies but would also expand the basin’s capacity for storing carbon – ultimately paying for itself by a wide margin.

Years of intensive farming, mining, and the spread of invasive plant species such as eucalyptus have devastated the Thukela basin. The proposed plan would involve removing alien plant species and untenable cattle grazing while replanting trees to prevent soil erosion. As its findings make clear to South African policymakers: “while ecosystem restoration can be expensive, requiring significant and sustained investments to be effective, the potential benefits are much higher than the costs.”

Perhaps the most ambitious – and famous – project being undertaken by African governments to mitigate the destructive impact of a changing climate is the “Great Green Wall’ in the Sahel region, which stretches across the southern edge of the Sahara from Senegal to Djibouti. The African Union launched the afforestation project in 2007 to stop desertification in the area, generate employment opportunities for local communities, and absorb carbon from the air for decades and centuries to come.

While progress on the Great Green Wall as a whole has been haphazard, despite new pledges of €11.8 billion ($14.3 billion) in international financing made at the One Planet summit in Paris this past January, a few countries have already seen significant results. In Ethiopia, approximately 15 million hectares of inarable land has been reclaimed, while in Nigeria, five million hectares of land have been restored and 20,000 “green jobs” have been created in the process. In Senegal, which is also home to the world’s largest mangrove restoration initiative, work on the Great Green Wall has seen over 11 million trees planted so far, rendering 25,000 hectares of land fertile once again.

Even with these wide-ranging efforts, the financial and humanitarian costs of climate change for the African continent will still be vast. Crunching the numbers for the UN General Assembly attendees, Tshisekedi emphasised that the African continent will need $30 billion annually by 2030 to combat the impact of climate change, rising to $50 billion by 2040. To finance a green recovery across Africa and future-proof the continent from rising global temperatures, the Congolese President insisted that “Africa does not need charity” but rather “constructive win-win partnerships.”

With this in mind, next month’s COP26 meetings in Scotland offers the perfect opportunity for industrialised countries in the Global North – who have hugely benefited from carbon-intensive economic development over the past two centuries – to respond to Tshisekedi’s call to “materialize all the promises made to Africa in compensation for the sacrifices agreed to protect humanity against global warming.” While cross-continental initiatives are springing up from the Sahel to South Africa, the future of the African continent is still riding on a powerful international response to climate change that can meet the needs of those least responsible for the crisis but most directly exposed to its effects.