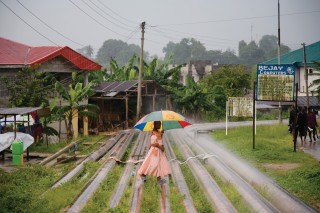 The Niger Delta Avengers say they are planning to secede from Nigeria on October 1st. They’re not interested in negotiating with President Buhari on oil revenue sharing. In fact, they are praying “for Buhari and the Northern hypocrite (Northern Governors) that oil should be found in commercial quantity in the North, so they can let the Niger Delta go.” For the NDA, the misdeeds of the Nigerian government and foreign multinationals, not limited to economic degradation of the region and state sanctioned violence, can only be fixed if political power is restored to the region. Power should be in the right hands, they argue. That is how to fix things. But what if it isn’t?

And what if, as with most issues involving instability and inequality, the situation is much more complex, and requires not only a mere transition of power, but also a process that is centered on imagining a new future for the region, built on community, rather than megalomania? When thinking of the NDA’s opposition to the government, I can’t help but think of other opposition movements to the government and its exploitative multinational partners in which women have played a front and center role in making demands for change. The most frustrating aspect of the NDA’s declaration of their intention to secede from Nigeria, is how their actions speak to the consistent erasure or dismissal of women’s roles in inciting change, and participation in imagining new futures of contested spaces.

Since 1984, women’s resistance in the Niger Delta has been crucial to implementing real policy change in the community. During the 1984 Ogharefe’s women’s uprising, several thousand women organized and blocked the entrance to Pan Ocean’s production station to protest a lack of clean water infrastructure and disputes over land ownership. Pan Ocean had also refused to pay for crude oil it extracted from the region. Terisa Turner notes, “When Pan Ocean’s managing director approached the site the women had in fact made good their threat. Before the arrival of the company’s officials, the women had removed all their clothes. The sight of thousands of naked women of all ages was not one that these officials nor the police could withstand. They all fled without hesitation. The women’s demands were met almost immediately.”

But multinational oil companies have not been the only culprits within the region. Sokari Ekine’s Blood and Oil: Testimonies of Violence from Women of the Niger Delta details chilling accounts of women that have experienced state violence in the Niger Delta. The testimony of one woman, Kawayorko reads “On this day we women were demonstrating. We sang as we moved from our town to Ken Khana. Singing near the main road we met face to face with the army- they asked us: ‘What are you people doing?” After our own explanation…they asked us to lied down on the road- it was not merely caning…they dragged some of the women into the bush. We were naked; our dresses were torn- our wrapper was being loosed by a man. They tore our pants and began raping us in the bush. They are raping you in front of your own sister. They are raping your sister too in front of your mother. It was like market.” The Nigerian government according to Ekine, ‘continues the policy of militarization of the region in response to the increased militancy of local people.’

Women’s opposition to to the exploitation of the Niger Delta region has been covered in the media both locally and globally, but it seems we are more excited by masculinist militancy than pushing the public conversation on the actual issues at hand (which the NDA claims to be fighting for). While the question of President Jonathan’s involvement with the NDA is certainly sensational, there are other questions that are equally if not more significant. For example, How does the NDA plan to handle oil if they actually take control? Will they no longer sell oil to multinationals? This is a serious question because the dynamic between the government and the multinationals is the root cause of much misery in the region. If they don’t plan to drill for oil or sell it- then how will they thrive as an economy? Have they considered what it takes to harness a resource through a rhetoric of community rather than one of profit? Because if so, I think a lot of countries (Nigeria included) would pay them for some advice. If, as many suspect, they have no idea to do with this power they yearn for, perhaps they could start by reading through all the agreements women throughout the region have fought and put their lives on the lines to broker in to bring some kind of peace and safety to their communities. However, if this power play is just about ousting Buhari–because why not –then quite frankly, who cares? As exciting as this game of chess is between the federal government and NDA, it obfuscates the real issues with the region–issues that I doubt will be resolved just because the NDA secedes.

Caroline Usikpendo, the president of the Niger Delta Women’s Movement for Peace and Development in Nigeria notes that, “women are the custodians of culture in Africa yet they are always left out of conflict resolution mechanisms.” Usikpendo speaks to the how the narratives of resistance within the Niger Delta are often focused on male-led militant initiatives, rather than the community-oriented tactics women in the region have continued to employ- often with great success. If things do get out of hand in October, perhaps the government should look to the history of women as conflict resolvers and include them in the peace-building process. Women can be crucial bridges in communities with young men who feel alienated and are frustrated with lack of employment opportunities, or even the very militants who want power in their own hands just so they can make the same mistakes all over again.