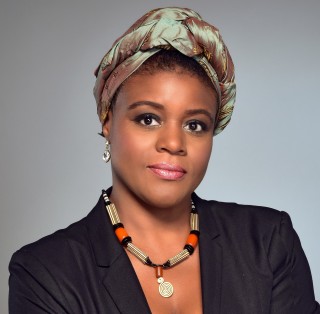 Meet Viola Llewellyn, a Cameroonian woman who has branched into Africa’s financial technology services sector through Ovamba; a platform dedicated to funding African small medium enterprises (SMEs). According to Llewellyn, who is the co-Founder and Global Chief Operations Officer (GCOO), Ovamba is designed to fund African businesses as well as provide an alternative to traditional banking methods, in a climate where traditional banking still facilitates financial exclusion amongst certain demographics, rather than inclusion. As such, Ovamba helps facilitate how SMEs engage with banks and receive access to credit.

Llewellyn is blazing the trail in financial services technology on the continent, a sector that is regarded as capable of changing the lives of Africans for the better. In 2015, Bill Gates mentioned that emerging financial technologies in Africa will eventually lead the continent’s poor to a point where they exercise financial control over their assets. “Digital banking will give the poor more control over their assets and help them transform their lives and by 2030, 2 billion people who do not have a bank account today will be storing money and making payments with their phones,” he wrote on Gates’ Notes.

Through Ovamba, Llewellyn has been able to proffer solutions to prevailing challenges in the sector, like developing countries’ Gross Domestic Product (GDP), by funding the set-up and upgrading of SMEs in African countries. “Ovamba is all about serving the underserved in the society, we make use of technology to improve the lives of Africans,” she says.

Llewellyn believes in Africa’s potential to grow and create inclusive digital financing for everyone. Aside from serving as an alternative to traditional banking methods, Ovamba also caters to rural areas to provide access to banking, even if it is outside the more popular methods. Speaking on whether the financial services sector in Africa is marketplace without boundaries, Llewellyn agrees, without reservations, that the continent can have access to various factors which will improve its lot in many areas, providing options for the underserved.

Yet, while many African countries seem to be grappling with innovative ideas and creations, Kenya seems to be way ahead. Llewellyn thinks that in order to catch up to Kenya’s favorability towards innovation, other African countries need to allow curiosity within schools to be part of their efforts towards building a sustainable economy driven towards innovation. “I think what Kenya has done is allow their young people to become creators by allowing them explore what it is they take interest in, not necessarily giving them what to think about,” she said.

Last week, the world celebrated the International Day of the Woman. While being a celebrated woman on the continent and in the financial technology sector in Africa, Llewellyn believes the African woman has the power to decide what her fate in life will be. “I think the African woman’s place is wherever she decides to be, we are powerful, modern, global citizens, learned and more, with all these, we can conquer the world,” she says.

During the 2015 Clinton Global Citizen Awards, the deputy minister of health and sanitation in Sierra Leone, Madina Rahman, was an honouree for her leadership and response to the Ebola outbreak in West Africa.

According to Llewellyn, although the continent still suffers major challenges like access to education and literacy, many African women are more educated than the average woman in other climes and that holds power. “During the New African Woman Magazine Awards, powerful female personalities like President Joyce Banda of Malawi were asked what they thought of the African woman and many of them responded in like manner, referring to the African woman as bold and adventurous,” she said.

South Africa’s special envoy to the Open Government Partnership (OGP), Ayanda Dlodlo, echoes this. Dlodlo has emphasized that she expects all African governments to be a part of the initiative in order to promote the values of transparency, citizen empowerment and fight against corruption.

Llewellyn agrees. In addition to being nominated for the New African Woman Magazine award in Finance and Banking, she has also been invited to speak at various events celebrating the African woman in business and technology. Although the award for same category was given to Nigeria’s Arunma Oteh, who became a World Bank Vice President in 2015, Llewellyn states that it was an honour to be nominated. She knows a lot is expected of her and she is changing Africa for the better in her own way through Ovamba.

Llewellyn’s career speaks to the fact that women in the financial technology sector are changing things. The other nominees in the finance and business category for the New African Woman Magazine Award, are game changers as well. Tunisia’s Hela Cheikhrouhou is an avid activist for climate change on the continent and Morocco’s Najwa El Iraki is an expert in business development and financial services, while Nigeria’s Omokehinde Ojomuyide is the Vice President and Area Business Head for West Africa at MasterCard. These women are showcasing that financial technology services, have the capacity to change the way people are able to access money on the continent, and that is no small feat.