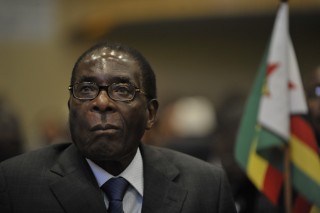 On the surface, it seems like something great is happening in Zimbabwe. Nonagenarian sit-tight President, Robert Mugabe, has been forced out of office by the military, and people within and beyond the continent are lauding the event as inspiring and galvanising for pro-democracy forces in the country and the region.

But there is nothing democratic about the forced exit of Robert Mugabe. What is happening in Zimbabwe is at best a power tussle in the ruling party, and at worst a misogynistic campaign against Mugabe’s wife, Grace Mugabe. Neither assertion should be misconstrued as an expression of support for Robert, who’s robbed Zimbabwe of progress over the last 3 decades, or Grace, whose only speciality seems to be gracing newspaper pages with stories of opulence and assault.

"Robert Mugabe has been terrible since 1983 when he killed 20,000 people in Matabeleland. Grace Mugabe was probably doing her form one [first year at secondary school] at that stage." https://t.co/KYFLfirtKo pic.twitter.com/MNSiFPVQnA

Yet, the removal of Robert Mugabe is nothing but a coup, carried out, not in the interests of democracy or the masses, but to safeguard the inheritance of a powerful clique who see themselves as rightful heirs to the throne of Zimbabwe. Thus, the removal of Mugabe is a victory for the system which gave him power for more than three decades. Such system, perennially rigged against the masses and democracy, may remove the man in power, as is now the case with Mugabe, but ensures that the status quo remains the same; and so enters Emmerson Mnangagwa.

Emmerson ‘Crocodile’ Mnangagwa, whose firing from his vice presidential position set the military coup in motion, has now clearly defeated Grace Mugabe from succeeding her husband. But his victory does not mean any better Zimbabwe’s political or economic progress. Mnangagwa is not called ‘Crocodile’ because of his love for democracy, human rights and socio-economic development. He was the minister of state security during the Gukurahundi massacres in which thousands of Ndebele civilians were killed and is widely believed to be responsible for the massacres.

#MugabeResigns replaced by Emerson Mnangagwa who was the architect of Ndebele massacre- leader of the fifth brigade (Gukarahundi) in Matabeleland that killed over 30,000 Ndebeles- nothing to celebrate about this vicious guy.

Succeeding Mugabe has been Mnangagwa’s open ambition for years; so when President Mugabe sacked him, a move that looks to have been orchestrated by Grace, the President’s wife and contending successor, the crocodile made his move, through the Generals, to dethrone the man with whom he had run Zimbabwe to the ground. For over thirty years he had been in the corridors of power, participating in, and in some cases, leading the pillaging of Zimbabwe. Now is his turn to even do more.

So, on no grounds should we celebrate the removal of Robert Mugabe from power. In fact, with the system that kept Mugabe in power still intact, we should even be more scared about the presidency of Mnangagwa; if he shares the healthiness of Mugabe, then we may be in for another 2 decades of Mugabe-esque rule.