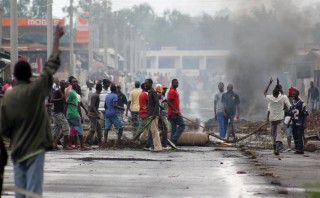 The tragedy of African protests: Why Africa needs to recognise civilian casualties

There have been more than a hundred deaths from civil protests in Africa this year and more than ten times that number in the last five years. But these casualties are hardly ever spoken of; at most they make cameo appearances as astronomical figures in media headlines and help increase page views. And then they are forgotten, sometimes even before the protest streets are cleared of burnt tires and barricades. Last week, at least four people died protesting the controversial referendum to remove the term limits of Congo-Brazzaville’s three decade ruler Sassou Nguesso. 12 were killed a week before that while protesting the controversial election of Guinea’s President Alpha Condé to a second term. Like the 77 people before them—who died in the protests to stop Burundi’s President Nkurunziza from seeking a third term earlier this year—they would all be buried with no inquisitions into their deaths or justice for their families.

This October, Burundian journalist, Désiré Nimubona wrote an article titled “Burundian Lives Matter Too”. Published in humanitarian news and analysis blog, IRIN, the article alluded to the Black Lives Matter protests in the United States of America which has gained and held global attention, in contrast to international neglect of Burundians especially those who were being killed almost on a daily basis for protesting against the government. “It’s not unusual to find dead bodies in Bujumbura these days. We discover them on the streets, in drainage channels, bushes and rivers, he wrote. “Meanwhile, internationally, Burundi appears to be side-lined as the world’s attention focuses on Syria, Afghanistan and the refugee crisis… My message to the world now is: “Burundian lives matter, too.”

The indifference towards casualties of civil protests is not exclusively a Burundian issue. In many African countries, protesters are often branded miscreants, criminals, or threats to national stability, regardless of how noble their cause or peaceful their marches. Evident from Uganda’s 2009 protest, Egypt’s 2011 revolution and the Democratic Republic of Congo’s January uprising, government forces require little persuasion to open fire on protesters while the legal authorities seldom bulge to even the strongest persuasions to investigate such massacres. Investigations into protesters deaths hardly occur and the few times they do, they end up being politically motivated, as in Egypt, or grossly insufficient as in Nigeria and Tunisia. “In Africa, leaders don’t learn from the past,” Désiré said. “Even before independence, people have been dying from protests, and after independence many continued to die from wars and genocides. So today, it would be difficult for these leaders to think about causalities especially when they consider protesters rebels or insurgents like in Burundi.”

Unfortunately, some protesters share in this inhumanity too by turning oft-noble campaigns into rampages of murder and destruction. “I remember that in Burundi, I as reporter, and others, were shocked after we have learned that a young man believed to belong to the ruling party was burned alive by angry protesters. This tarnished the image of the protestors and some reporters decided to no longer cover their works,” Désiré said. A similar thing happened in a much larger scale during Nigeria’s 2011 post-election protests when anti-electoral malpractice protesters quickly turned into enactors of sectarian violence and massacred nearly a thousand people, many of them defenceless women and children. In January, a protest against the Charlie Hebdo cartoon in Niger was used to attack Christians and burn their places of worship. Like the casualties of the aggression of government forces, these victims of protesters violence are also easily forgotten with no recourse to justice for them.

I asked Désiré if Africans should cease to stage public protests since they know that they are putting their lives before authorities who would not hesitate to take them. “Even in “peacetime” African lives perish and mean little to most of their leaders,” he said. “A long as there are problems, there will be protests.” The issue, he continued, is how to make protests less deadly, and that begins with both sides—the protesters and the government forces—ascribing a greater value to human life. “We have a very long way to go. African leaders need to know that they can manage (protests) peacefully. Opposition also needs to know that they can protest peacefully. But when one of the parties resorts to violence, then the results is what we see every day here in Africa.” Then there’s the continent-wide frustration spurred by poverty and inequality which must also be tackled. These protests are more economically motivated rather than political, Désiré said. “The misery weighs a lot on protesters’ shoulders, and sometimes pushes them into violence.”

Still there is a huge societal indifference to the casualties of civil protests and it plays out in the inability of the victims to attract or hold media attention and focus. There has been little said in the Nigerian media about the 12 victims of the 2012 Occupy Nigeria protests or the nearly a thousand before them in the post-election violence of a year before. The Kenyan media has all but moved on from the victims of the 2008 election violence and their unheard calls for justice, so too that of Zimbabwe regarding the political violence of 2008 which claimed about 200 lives. “This is the matter of conscience and a high degree of understanding that “other’s life matters too,” Désiré said. “In some African countries we have this culture of not seeing another person as a fellow human being.” While the bulk of the blame for these casualties of civil protests rests with African governments, it is this societal indifference to the victims that continue to afford the authorities—and other criminal elements—to take lives with impunity.