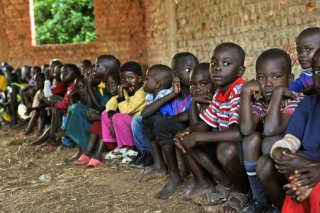 “I was just in South Sudan a couple of weeks ago and there are so many families now who try to have their children survive on salt water. The famine is getting worse. It’s horrific. And in Uganda, I have seen children, youths who have seen their entire families shot in front of their eyes arrive at our refugee camp.” – Dr. Martina Fuchs, Pediatrician, Founder, and CEO of Real Medicine Foundation (RMF)

There are over 20 million refugees and over 60 million displaced people worldwide as millions flee war, terrorism, and government abuse, or are displaced by natural disasters in countries around the world. In southern and eastern Africa, over 36 million people face hunger as a broad strip of the continent battles the worst drought in decades. The human rights implications of these catastrophes are profound, resulting in an increased need for relief, support, and assistance across the board. This rising number of those displaced, physically and emotionally wounded and starving people, count on the rest of the world, particularly on humanitarian aid for survival.

When a massive tsunami hit South Asia on December 26th, 2004, Dr. Martina Fuchs was in Germany celebrating the second day of Christmas with her loved ones. Soon, she was back in Los Angeles but she could not get the images of devastation and despair that flooded television screens nor the increasing number of fatalities out of her mind. Hence, when an opportunity to be of service presented itself, she made the decision to go and help.

Dr. Fuchs ended up working in one of the refugee camps in the south of Sri Lanka early 2005. She helped establish a small servant clinic which catered for about 1,000 displaced families within and outside the camp. This project gave birth to Real Medicine Foundation (RMF), a humanitarian aid organisation with a unique community-based sustainability model approach. RMF believes that real medicine focuses on the whole person, reaching beyond medical and physical care to include economic, social, and emotional support. From disaster relief to hospital support to vocational training, RMF’s adaptive global initiatives are tuned to the country, culture, and needs of whatever region they operate in.

“The best way to describe it right now is that we are liberating human potential. We are empowering our team to be leaders and to take ownership. And also empowering communities and the people that we are supporting to take ownership and to tell us what they need for eventual self-sustainability. So our main goal is to build capacity on the ground together with the community,” Dr. Fuchs told Ventures Africa.

RMF is present in areas of extreme poverty and regions that have been hit by disasters. They begin with basic necessities for survival; food, water, medical care, and then move on to establish more permanent solutions often starting with primary health care such as a mobile or stationary clinic. For example, in Mozambique, RMF designed the very first mobile clinic in the entire country. Other permanent solutions like maternal health care, child health care, malnutrition eradication, and HIV/AIDS care are also established.

In a huge resettlement camp in the Masindi district of Kiryandongo, Uganda, RMF set up one of their signature programs. Along with establishing a 75-bed healthcare centre with the United Nations High Commission for Refugees (UNHCR), RMF supports the children of refugee families to primary and secondary school and also established nursery schools since many of the refugees are women and children. “We also established an economic component,” said Dr. Fuchs.

In 2011, the community asked the foundation to help them get back on their feet so that they would have an income to support their families. RMF responded by establishing a vocational centre. “We started with hairdressing and tailoring, then added bricklaying, and carpentry. It’s a large program now,” enthused Dr. Fuchs.

Graduates of these programs establish businesses with the support of RMF, and they, in turn, take on new trainees in their businesses while giving 10 percent of their income back to the institute. This innovative community-based sustainability model approach by RMF is considered a paradigm shift in humanitarian work and development. “It’s a model that works really really well. We were approached by UNHCR to explain how it’s done because they want to replicate this in more places in Uganda.”

RMF initiates programs by engaging with communities to assess existing resources and prioritise primary goals to meet the needs of individuals. Dr. Fuchs says that the foundation’s strategy is to build capacity until they, RMF, are not needed anymore. In eight years of their operation, RMF has provided aid to 15 million people in 21 countries across four continents and has 48 active initiatives using this innovative approach. In Africa, RMF currently has several distinct successful active projects in five countries, Nigeria, Uganda, Kenya, South Sudan and Mozambique. “We are present in different capacities depending on the need of the community,” said Dr. Fuchs. “We don’t have a one fit all solution. We really listen and this is how we have developed different solutions.”

In early 2010, RMF discovered that the entire nation of South Sudan had only four midwives. This discovery led to the establishment of the first ever diploma level College of Nursing and Midwifery in Juba. A project that was undertaken in conjunction with Juba Link, a South Sudanese based humanitarian aid organisation. As at the end of last year, 113 nurses and midwives had graduated from the three-year program with 83 more involved, and an additional 60 students as of July 2016. “This is real capacity building. We very much look for nurses and midwives that are committed to South Sudan so that we avoid a brain drain,” Dr. Fuchs explained.

Now, this model which has been replicated in South Sudan has attracted a lot of attention from other countries and big aid organisations like UNFPA, UNICEF, WHO, UNDP, and CIDA in Canada. Going forward, the goal is to hand the college over to the Ministry of Health, South Sudan. “The overall vision is always to help establish new models and then hand them over to the community or the government because we also want to serve the vision of the country,” stated Fuchs.

The amazing work done by Dr. Fuchs and RMF is not devoid of challenges, one of which is the issue of accessibility. A big part of RMF’s work is healthcare education as there is occasional resistance to aid due to religious beliefs or just sheer ignorance. Dr. Fuchs mentioned that in some camps, children are often brought in very late with advanced malaria and severe acute malnutrition because of the belief that there’s witchcraft involved, or that the use of modern medicine will hurt. There are also beliefs that people die in hospitals. “For example, in South Sudan, there’s a belief around birth and sexual practices connected to severe acute malnutrition in small children,” Fuchs said. “This is one of the reasons we only hire locals and nationals, to promptly earn the people’s trust, and educate them carefully, culturally, and sensitively.”

Another challenge in running a humanitarian organisation is finding the right people and building the right team for the job. Working in humanitarian and disaster relief could be valuable and rewarding, but not everyone is there for the right reasons. As Dr. Fuchs pointed out in the course of her interview, it takes passion, perseverance, and diplomacy to work in the sector. It’s a job meant for individuals who want to serve and contribute to something bigger than themselves. And of course, people who will do the right thing when no one’s watching.

“The whole work is actually based on the right people. I couldn’t do this by myself. I have to give it to the RMF team. It’s really them who make all of this work,” Fuchs remarked.  She further stated, “What I’ve been doing is to coach our team leadership and then have them coach the next round and the next round so that everyone that come on board is in alignment with our vision of liberating the human potential. And that they live our values of respect and dignity.”

Having served in several crisis-laden countries and regions around the world, Dr. Fuchs has experienced a lot being in disaster zones and relating with victims and survivors of disasters, something she describes as heartbreaking and horrific. “You know, I find it the hardest when boys, especially teenage boys try to be strong and hold back their tears. When I see African teenage boys trying to be a man holding in so much pain, it just breaks your heart.” RMF has started and carried out successful psycho trauma support programs for these displaced children and teenage boys in Buwate, Kampala. Currently, they are doing the same for traumatised survivors in South Sudan.

I’m a pediatrician, to me, all of this is medicine, that’s why we call it “real medicine.” Medicine can be all kinds of things, be it psycho trauma support or economic support. It doesn’t have to be antibiotics, although it can be. However, there is so much more to healing. – Dr Martina Fuchs