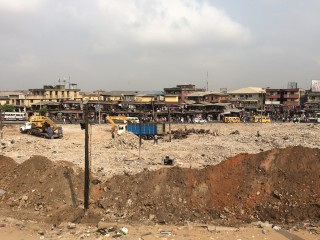 Oshodi Market demolition: One man’s policy is another man’s pain

The Lagos State Commissioner for information Steve Ayorinde, said the site will be used to build a new bus terminal, according to an article in Nigerian newspaper, Premium Times. However the local government office that oversaw the demolition did not respond to emails or phone calls when contacted on Monday.

The Oshodi Market demolition represents a recent trend by the state government to take over some market spaces for redevelopment. After a fire destroyed the Tejuoso market in 2007, the former governor of Lagos state, Babatunde Fashola sold the land to a private developer who built retail space that rented out at N750,000 a square metre, compared to the previous rental cost of N60,000.

Other countries have also targeted market spaces for redevelopment. In Ghana last year, about 1,000 traders in the Kejetia market at the Ashanti region were displaced after the government removed them to reconstruct the Kumasi Central market.

For the Oshodi market traders, who are still reeling from the demolition last week, the reality of losing their source of income has left them uncertain about the future. The demolition was a surprise for Madueke who was still on Christmas vacation in the eastern part of Nigeria. His friend called him the morning after the demolition to tell him his shops had been bulldozed. He rushed back from his holiday to salvage what he could from the wreckage of his three shops. Five days later, all he could find were three mismatched pairs of shoes dug from the dirt.

Madueke, popular amongst his predominantly Ibo brothers in the Owonifari market area, employed seven employees who ran the day-to-day operations of his shops, selling second-hand designer shoes and electronics. Standing in front of the demolition site where tractors worked to clear the rubble on Monday, Madueke said he is now left with nothing and blames the Lagos state government.

“People are told we were given adequate time but this is not true. The demolition exercise began in the middle of the night. Traders were home, others had traveled for the holidays,” he said, raising his voice about the sound of trucks and the remaining nearby market.

Madueke and many of the apprentice market stall workers lack a formal education, making starting over more difficult.

Nigeria’s Land Use Act says all land in urban areas is under the control and management of the local government where the land is situated. In a chat with an Abuja based property lawyer, Barrister Kingsley Ikhine, Ventures Africa learnt that as long as the government makes relocation plans for the traders, there was no cause for alarm.

The Publicity Secretary of the ruling All People’s Congress (APC) Joe Igbokwe recently wrote a column in Sahara Reporters saying the Oshodi market demolition was a plan put in place under the previous government and that there were originally plans to relocate the Oshodi traders to new location. He said that meetings had been held with Oshodi/Isolo local government market leaders on executing the relocation but no progress had been made.

“A lot of politics, mistrust, blackmail and ethnicity played itself out on where to take the market to,” he said in the column.

There have been reports that the Oshodi market demolition was specifically targeting Ibo traders. Ventures Africa spoke with several market traders operating in the nearby shops that weren’t part of the demolition. Uchenna Kingsley, an Ibo trader, said the reason why many in the area are accusing the government of marginalization was because Ibos made up 90 percent of the demolished market population.

“The demolition exercise affected only Ibo people because it is mainly Ibos that own shops in this location, it is rather unfortunate,” Kingsley said.

However, trader Emmanuel Mebitone said there were several other ethnic groups that also lost shops in the demolition.

In addition to accusation of Ibo marginalization, many traders said the government didn’t give the market owners enough time to remove their belongings. Chuks O.S, an easygoing trader selling textiles, said the demolition exercise began around midnight and not 7 am as reported in the media.

“I came out around a few minutes before 5am and by then the exercise was halfway done already,” Chuks said.

Mebitone said the government did give notice to move but the time between warning and actual demolition was very brief.

“There is nothing we can do after all, we cannot fight the government,” Emmanuel said.

Part of the problem leading to the stalled relocation is cost. Chuks O.S said the prices for stalls that are being suggested as relocation by the government are too high for small traders such as those in Oshodi.

“All I know is the other market close to us here beside the post office, is charging up to 1 million Naira for a stall, meanwhile the government says the stalls go for 5,000 Naira. How can a struggling trader afford a market stall that goes for a million Naira?” he asked.

For Madueke, his earlier plans to get married this year and start a family seem to be unattainable now as he is more concerned with getting back on his feet business wise. Now Madueke is worried about how he will be able to start over.

“My situation can be likened to a 500 level Law student who is asked to go back to 100 level. After owning three shops for 15 years, all I do now is stand around trying my hardest to come up with solutions to my predicament, just like everyone else in this situation,” Madueke said.