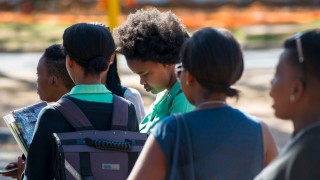 “For all the times that we were silent when we were told that our hair is not right, and for all the times we had to negotiate whiteness for our existence in the world, this marks such an important moment for us in this country.” – Azola Anele Qoqwana on #StopRacismInPretoriaGirlsHigh

“Without a doubt, racism is alive and burning in the hearts of many individuals and societies. But there are times when we may need to look deeper than accusations of racism to see if other intentions exist, even in societies where race relations are known to be charged.” – Adaobi Tricia Nwaubani on #StopRacismInPretoriaGirlsHigh

Late last month, black students of Pretoria Girls High School in Pretoria, South Africa, protested against school hair rules they deemed racist. The protest went viral, birthing the hashtag #StopRacismInPretoriaGirlsHigh on social media, which not only garnered worldwide attention but also sparked a broader conversation beyond the subject of hair.

The basis for her argument?  During her secondary school years, students were barred from having relaxed/chemically treated hair. Failure to comply with the school rules meant losing all your locks. “At unannounced intervals during the term, one of the school’s matrons conducted an inspection of each girl’s hair, then ran a sharp pair of scissors through any locks that she suspected of being chemically treated.” Afros and holding hair up in buns were also restricted.

Nwaubani further listed other restrictions contained in the schools Code of Conduct document:

“I can imagine that a number of white students also felt constrained by this strict hair and miscellaneous requirements,” she wrote. Nwaubani’s argument is clearly flawed, as it takes things out of context.

Is Nwaubani aware that Pretoria Girls High is a predominantly white school where according to other allegations, black girls are punished not only for wearing their hair in all its ‘kink glory’ but also for gathering in groups? A school where black students are occasionally referred to as monkeys and kaffir (South African slur for black) by both white teachers and students.

In the heat of the protest late last month, I reached out to the friend of a friend in South Africa, a writer, Azola Anele Qoqwana. Qoqwana said that the protest and the issue went beyond hair rules, a stance which isn’t peculiar to her. “It’s not just about their hair. It’s about all the other layers of things… This incident exposes how much the rainbow nation has failed us in so many ways, and we see more and more young black women revolting and asking important questions about the economy of the country, about how we are being policed as black women, and who says when and how we can speak,” she said.

Over 20 years post-apartheid, and South Africans are still having conversations about “black schools” and “white schools,” with the latter being elite institutions with better resources; schools such as Pretoria Girls High. Although the demography of these schools has changed to include black students (those who can afford it), it is quite lopsided. “There’s an argument that is brewing where people are asking, ‘Why do you take your kids to those schools?’ Hey! Actually, it’s our country. So there shouldn’t be a thing about Black schools and White schools; those schools should be everybody’s schools because, at the end of the day, black people make the majority in this country. That conversation shouldn’t even exist,” Qoqwana stated.

Has Nwaubani ever heard of the term covert racism? This is what goes on in most elite South African academic institutions. First, the system has been set up in a way that it is unfavourable to black South Africans with the high cost of tuition. For long, in these “white schools”, segregation and racism happen in the most silent ways, with white educators and administrators enforcing rules that are often insensitive to black students. And for long, black students have been silent, “negotiating whiteness” for their existence. But obviously not anymore with a more assertive generation forcing establishments and institutions to evolve.

Does Nwaubani not wonder why the protest garnered such widespread attention? It is because people around the world recognised it for what it is – racism, structural racism. The protest painted an all too familiar picture that is part of broader societal issues like identity and white supremacy. We see it daily in corporate organisations, what a professional appearance entails – straightened hair or weaves. Locks, afro’s, braids, and even cornrows, all traditionally black hairstyles are frowned at. This is what society has accepted as the norm, but all that is changing with the radical movement of black women increasingly embracing their natural locks and being unapologetic about their being.

“Beyond the protests and accusations, I would have liked to hear the Pretoria High School administrators explain the reasoning behind their policies. Instead, hair rules at the school have been suspended by provincial authorities,” Nwaubani wrote finishing off her argument. Perhaps the reason she didn’t hear them is because they had no “straightforward intentions” behind their policies. And provincial authorities took the decision to suspend them because the policies were clearly racist. Looking deeper is out of the question.