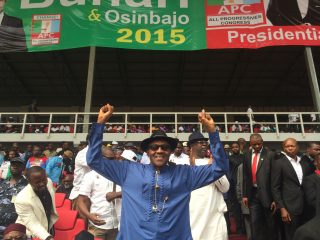 Political activism this election season cannot rescue Nigeria from the dungeons of bad governance, only the building of an off-season movement will.

If you pay attention to what’s been happening on social media, it would seem that Nigerians have finally woken up. The story goes that; forced to sleep by the irredeemably corrupt ruling class, long-suffering citizens of this aggressively pillaged country seem to finally be rising from their slumber to demand an end to the pillaging of their only home by bad leaders.

This is a very inspiring and comforting narrative, but it’s also a false narrative.

Yes, Nigerians have been asleep to the criminal thievery of the ruling class, but they are not rising from their slumber; instead, they have just been woken up by the same ruling class, who now need the thumbprints of the common man to validate the continuation of their rule. Once the masses have donated their thumbprints during election time, they are sent back to sleep until it’s time for another general election. This is why we cannot trust, and should not take too seriously, the political activism that manifests only during election time.

Election-season political activism is like corporate marketing campaigns; the messages are hollow, the commitment barely skin deep and everything only lasts as long as that campaign season. The problem is, no real political change can come from such fickle and ephemeral exercises. And that’s just how the ruling class likes it—that is, political activism that raises some dust so that it seems like change is coming but never challenges the power and privilege of the elite, thereby ensuring no substantial change ever takes place.

Take, for example, the “go get your PVC” campaign. The logic of this political activism, which is rife on social media and enjoys some attention on the traditional media, posits that once ordinary citizens get their Voters Cards, they will be able to vote out bad leaders and bring in a government that will heed to their demands and better their lives. Beyond the comforting surface of this narrative, the logic is flawed. With our electoral system powered by money and winners decided by who has the best connections to (powerful segments of) the elite, the votes of ordinary Nigerians are merely rubber stamps. The 2015 election season perfectly illustrated this.

In a lead up to the 2015 elections, the ruling All Progressive Congress positioned itself as the vanguard of change and claimed to embody all of the frustrations and yearnings of the masses for a government that cares about them. However, the APC was never a construct of grassroots political mobilisation but a clique of the elite who badly wanted a taste of power, and the Party knew that to stand any real chance of winning power it needed, above everything else, massive connection to the powers that be. By general election time in 2015, as much as half of the APC comprised of PDP political leaders, and the party courted and got the blessing of former President Obasanjo, a PDP stalwart in no little measure.

Now, it cannot come as any surprise, that the APC-led government has continued the legacies of past governments in being ineffectual, insensitive and totally out of wits to take on the challenge faced by ordinary Nigerians. It has always been members of the ruling class who ruled with reckless abandon since independence. We really shouldn’t expect any significant shift from those now positioning as vanguards of a 2019 political revolution; neither their rhetoric nor their antecedents deserve any serious attention.

Even if the talk—for example, of giving a red card to APC and PDP—sounded genuine, and the intention—of businessmen charged by God to save Nigeria—seemed honest, the practicality of achieving a real break from Nigeria’s tragic trend of bad rule, is improbable in 2019. This is because what Nigeria needs to break from the strangling grip of the current ruling class is a deeply inclusive movement of the masses united by common interests, shared frustrations and mutual solidarity. Such a movement takes years to build, and at the moment, there’s nothing of that sort in Nigeria.

In Italy, it took the 5 Star Movement nine years to unseat the establishment parties. In Spain, Podemos, another anti-establishment movement has taken four years to grow into a powerful political force, but it is yet to wrest power from the ruling elites. Momentum, a now-powerful movement of young progressive Brits, has spent the last three years trying to reshape the UK Labour Party and remains the most active political group in the UK, even though the next general elections is potentially five years away. These examples depict the amount of hard work it takes to displace any ruling elite, talk more of Nigeria’s ruling elite who, leveraging religious and ethnic divisions, maintain a stranglehold on every aspect of our lives.

The closest to such European movements that we have in Nigeria are: Enough-is-Enough, which is yet to gather enough momentum to pose any real challenge to the status quo; Our Mumu don do, whose scope and principles are terribly vague and the Red Card Movement, which currently has a vision that doesn’t go beyond not voting for the APC and PDP. These movements could still metamorphose into a strong and inclusive movement capable of challenging—and changing—the status quo, but they are many years away from that. So, will we see a change in 2019? Except we are talking about one that is identically similar to the change of 2015.