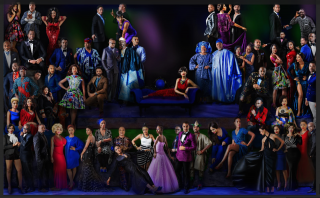 In October 2014, after over three decades of being away, critically acclaimed artist, Iké Udé, returned to his homeland for what has been described as a bold and ambitious project, Nollywood Portraits: A Radical Beauty. Udé took photos of 64 Nollywood personalities, capturing an impressive cross-section of the industry including screen icon, Genevieve Nnaji, established actor and director, Stephanie Okereke Linus and maverick filmmaker, Kunle Afolayan.

The next generation of rising stars was not left out with the likes of Alex Ekubo, Uti Nwachukwu and Beverly Naya featured as well. According to his project manager, Osahon Akpata, “the objective of this project is to celebrate these African celebrities in the timeless, classically elegant, style he [Iké Udé] has perfected.”

The project consists of an international touring exhibition and recently concluded a 3-month showing at the Museum of Contemporary Photography in Chicago. A coffee table book based on the project was also published late last year by Milan-based Skira Publishing. Currently, Udé is working on a documentary film, Nollywood in Focus, with plans for a 2017 release.

Born in Nigeria in 1964, Udé has lived in New York since the 1980s. Over time he has earned a reputation of a master portraitist being compared with legendary artists such as Van Gogh and Andy Warhol. His works have been exhibited, and are in the permanent collection of renowned museums and galleries around the world, including the Solomon R. Guggenheim Museum and the Smithsonian Museum of Art.

In an interview with Ventures Africa, Udé explains the idea behind this bold Nollywood project, what he found quite fascinating about his subjects, and his ‘dream project’.

Ventures Africa (VA): What inspired this project, and its title, Nollywood Portraits: A Radical Beauty?

Iké Udé: The African image and representation, as seen by the rest of the world, is mostly in the hands of the Western media, and the way that we are portrayed is horrifically appalling. Nollywood is the new face of Africa. From within, I wanted to employ the collective School of Nollywood as a cohesive, exemplary vehicle and framework that mirrors our core ambitions when we Africans are truly inspired. There was in part a vested interest in idealising these Nollywood talents as a counterpoint to the debased, sickly African image and representation that obtains worldwide.

VA: Was there a metric for the selection of the 64 personalities?

Iké Udé: Not particularly. That said, Osahon Akpata, the project manager had initially wanted to include—almost exclusively—the Nollywood A-list talents. But as I researched the industry, I came across these young, fabulous, beautiful talents such as Uti Nwachukwu, Eku Edewor, Alexx Ekubo, etc. So, I argued with Osahon for their inclusion so that we are able to truly have a fantastic cross section portrait of Nollywood—from the older generation, such as Sadiq Daba, Taiwo Ajai-Lycett, to the aforementioned younger generation of emerging stars.

VA: In the process of putting this together, what did you find most fascinating?

Iké Udé: The sheer grand ambition and will to succeed that pervades Nollywood, especially despite or because of the odds against them and the often difficult conditions they work under, not to mention the lack of fundamental support shown them by both the public and private sectors in Nigeria.

VA: How does documenting Nollywood stars compare to your other works?

Iké Udé: Most of my photographic work before Nollywood Portraits has been conceptual photography. These portraits of Nollywood stars were radically invested in evolving the African image and showing the world how we really are at our best. Hence, this very body of work represents the African mirror par excellence.

VA: How long did it take to put this project together?

Iké Udé: I first conceived the idea in 2008. Then Osahon and I met in 2014 and this subsequently fired me up to effectively commence the execution of the portraits. And though I had not visited in over three decades, I was in Lagos for the photo shoots a few months after we first connected. The actual making of the portraits took me two-years-plus.

VA: What has the reception been like so far?

Iké Udé: So far, so good! But this is also a grand, historical project that is designed for timelessness. We are just now, in the nascent stage of its reception.

VA: Are there other ‘Nigerian projects’ you are working on at the moment?

Iké Udé: Yes, but there are mostly in the gestation phase. But the one portrait project that I long to eventually realise, is a lovingly rendered, profoundly humanised portrait of our African albino population some of whom are hunted and killed or used for stupid get-rich-overnight-rituals in some African countries.