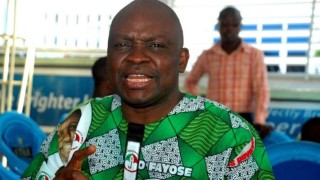 Like Okonkwo in Things Fall Apart, Governor Fayose is refusing to cower in the face of oppression

Governor Ayodele Fayose has declared war against Fulani herdsmen, and some Nigerians are not happy about it. According to them, he is instigating an inter-tribal war, one that could spread across Nigeria and likely result in genocide. Permit me to ask, “What inter-tribal war?” Are you referring to that which has always existed in this country? Is it the continued conflict among the Ijaw-Urhobo-Itsekiri people of Delta state, the occasional Hausa-Yoruba/Hausa-Igbo clash in Lagos, and Aba, or the 1966 pogroms that eventually led to the birth of Biafra, creating the national dissonance that still prevails today?

On Monday, while addressing the bereaved people of the Oke-Ako community in Ekiti state following attacks by Fulani herdsmen a few days before, Governor Fayose prompted local hunters to confront killer nomads wherever they are found within the state. In his words, “This killing of our people must stop. It is deliberate and we must take all actions to stop it.…You rape my wife, you rape my children, if they attempt it, bring them down! Terminate their lives!” he declared. “If they claim they want to sleep with your wives, they want to touch your children, bring them down! Bring them down!” Fayose thundered.

Once Fayose’s pep talk made it to the media, it ignited an intense debate on social media platforms. “In a normal society, Fayose would be condemned and ostracised for his invocation of genocide, in Nigeria, alas, some shall justify his words,” somebody tweeted in opposition. “Fayose’s first duty as governor is the protection of his people’s lives and property. Anyone that opposes that is a sadist. Simple,” another person tweeted in his defence. And so the debate raged on. But is Fayose wrong to have declared war on Fulani herdsmen in Ekiti state? A group of armed nomads that have wreaked enough havoc to be acknowledged by the global community as one of the deadliest terror groups in the world. I think not.

“Let us not reason like cowards,” said Okonkwo. “If a man comes into my hut and defecates on the floor, what do I do? Do I shut my eyes? No! I take a stick and break his head. That is what a man does. These people are, daily, pouring filth over us, and Okeke says we should pretend not to see.”

When Okonkwo said that in Chapter 18 of Chinua Achebe’s acclaimed novel, Things Fall Apart, he was addressing his kinsmen on the invasion that was taking place in their community. Christian missionaries were taking over their villages, eroding their culture, expanding their government and threatening to destroy their shrines, and he, Achebe’s protagonist, will tolerate none of that.

Last Friday, the killer nomads invaded Oke-Ako community where they killed two residents and injured several others. This attack prompted Fayose’s radical decision to set up a task force of local hunters, ban grazing in the state, and to propose a grazing bill. Yet Nigerians cry foul. Isn’t it ridiculous that Friday’s attack and killings didn’t get as much publicity and attention? Going by the level of atrocities being committed by these herdsmen, the attack in Ekiti state records the least number of casualties in recent times.

In February, no fewer than 300 persons were killed in a week by Fulani herdsmen in a series of attacks in Benue state. Early on in January, they were also responsible for the death of 30 people in Adamawa State, including a Divisional Police Officer. And this does not include the acts of kidnappings that happen alongside. They prowl during the day and in the thick of the night, killing innocent Nigerians, razing houses and forcing villagers, children to take up arms in self-defence. Surely, governor Fayose is not suggesting anything new if villagers in the north are already taking up arms to defend themselves in the face of a loudly silent government.

The reason why Fayose has the latitude to say what he is saying is simple;

There's a vacuum in leadership. Buhari is not showing leadership

In January, President Buhari did say a plan to map out grazing areas for the herdsmen was underway. That was five months ago. If the inaction of the government is anything to go by, Fayose should not be faulted for the steps he is taking to protect his people, however radical it might be. If President Buhari, will remain silent while hundreds of Nigerians are slaughtered by his kinsmen, he might as well sit back and enjoy the brewing war. Not every one can condone his constant silence, definitely not Fayose.