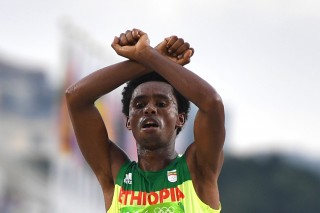 It took less than five seconds for Ethiopia’s Olympic medalist, Feyisa Lilesa, to go from national hero to despised traitor. “If I go back to Ethiopia maybe they will kill me. If not kill me, they will put me in prison, he said after his “traitorous act.” One may assume that Lilesa had committed a crime as heinous as treason or murder to warrant such punishment. Quite far from it, the Olympian’s offence was that on Sunday, as he clinched the Silver medal at the Brazil Olympics he raised his hand X shape in solidarity with protesters in his homeland many of whom have been imprisoned, tortured or killed. Ethiopia’s state broadcaster did not air a replay of Lilesa’s triumphant finish; it is the least of the backlash that he may end up facing from the country for whom he has had just put on the Olympic medal platform.

Feyisa Lilesa is of Oromo extraction, the largest ethnic group in Ethiopia. The Oromo people, despite constituting about a third of Ethiopia’s population, have long complained of and campaigned against economic and political marginalization by the ruling elite. “The Oromo consider themselves to be colonial subjects. This is because they have been denied equal access to their country’s political, economic and cultural resources, said academic scholar and activist of the Oromo cause Professor Asafa Jalata in an interview with Conversation Africa published on Ventures Africa. In November 2015, this concentrated frustration grew into public demonstrations against perceived federal government takeover of Oromo land, and have continued into sporadic protests for which the Human Rights Watch says that more than 400 people have been killed in clashes with security forces, an account that the government disputes.

On Sunday, Lilesa corroborated what the Human Rights Watch and many activists in and outside Ethiopia have been saying. “The Ethiopian government is killing my people, so I stand with all protests anywhere, as Oromo is my tribe,” he said. “My relatives are in prison and if they talk about democratic rights they are killed.” A day before, the Ethiopian government had announced to the warm reception of activists and civil societies, that it would launch an independent investigation into the alleged killings, but denied that police violence in the country is systematic. “I have to reiterate once again this is not systemic,” government spokesperson Getachew Reda told Al Jazeera. “There are cases of off-grid police officers who sometimes take the law into their own hands,” he said. “The government takes such allegations very seriously.”

Actually, what the Ethiopian government has taken very seriously over the years has been any person speaking up against it. Labels like terrorists and agents of foreign aggressors are often quickly handed down on critics of the government. Among the most prominent of them were the Zone9 Bloggers; a collective which routinely criticized the government’s record on human rights and governance were arrested –and released three years later—for allegedly having connections with terrorist organizations. The allegations were never proven, as are the ones now being made against the Oromo protesters. Dozens of members of the Oromo Federalist Congress (OFC), a legally registered political party, have, since the protests began, been charged under the counter-terrorism law even though the party disavows violence. Students peacefully protesting in front of the United States embassy in Addis Ababa have also been charged with criminal offences for their demonstrations.

Given the precedent described above, it is not surprising that Feyisa Lilesa is rethinking going back to the country for which he has won four Olympic medals. Many around the world also share his fears and have already raised nearly $130,000 for him via a GoFundme. “Feyisa Lelisa faces persecution if he goes back to Ethiopia and he has decided to seek asylum.  Funds are needed to support him and his family in the meantime, please donate whatever amount you can.  We assure you all the money collected will go to support this Oromo/Ethiopian hero,” the site said. The Ethiopian government often counters criticism on human rights record with a pointer to the country’s economic growth and development, but not even that argument can mask the tragedy that in the country what separates praise and persecution is the slightest expression of discontent with the government.