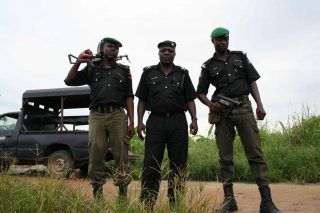 Errm, sorry, but we cannot #EndSARS

The current #EndSARS campaign brings to mind another #EndSARS campaign of a not too distant past. That campaign, against the Severe Acute Respiratory Syndrome (which killed over 750 persons, particularly in China) was eventually successful, containing the epidemic by the summer of 2003. The current #EndSARS campaign, against the indiscriminate brutality and rascality of the Special Anti-Robbery Squad of the Nigerian Police Force, would most likely not enjoy the same fate. Yes, thousands of Nigerians have protested (mostly on social media) against SARS, the politicians have tweeted their support and the Nigerian Police Force have promised to listen and do something about it, but one needs only to look beyond the surface to understand why the #EndSars campaign will not succeed.

To establish common terms of reference, it is important to define what success means for the #EndSARS campaign. For this writer, and as perceived through the opinions and personal accounts expressed in the protest texts across social media, #EndSars means ending police brutality, arbitrary arrests, often with no probable cause, and the institutionalisation of threats to life as a crime-fighting tactic. Well, neither of these things would end if SARS was closed down today, because SARS is itself a creation, and not the progenitor, of these police phenomena. Thus, if one truly, really, wanted to #EndSARS, they would have to end the underlying purpose which necessitated the creation of SARS in the first place.

Not everyone believes we should, or we could, #EndSARS; and that includes those who have empathised deeply with the protest. “Nigeria Still Needs SARS,” Vanguard, one of Nigeria’s most widely read dailies wrote in its December 6 editorial. “SARS, which is one of the 14 units under the Nigeria Police Criminal Investigation and Intelligence Department was created to arrest, investigate and prosecute people involved in violent crimes,” the paper said while lamenting that “some elements among them indulge in excesses that run counter to their true professional calling.” The paper also said, “The call for its scrapping cannot solve the problem. Rather, it will embolden these violent criminals to come out into the open and have a field day.”

Vanguard’s argument, as presented above, is substantive, right in many ways and widely shared. But, while it does very well to build on the given reason for the creation of SARS, it does little to address, nay analyse, the underlying purpose of SARS, and by extension police brutality in our society. For example, the editorial, like many opinions that have been shared on the #EndSARS campaign, treats the problems people have with SARS as exceptions, whilst most people see these problems are the innate features of SARS. Perhaps, if the former were the case, then the campaign and its hashtag would most likely have been something like “#EndtheExcessesBySomeSARSElements.” But it isn’t. And since that’s not the case, we might as well deal with the existential questions which have been raised by the #EndSARS campaign.

The first of these questions would be to ask, “Why does brutality, repression and exploitation exist in SARS?” To answer this question, one would also have to ask why the same issues exist in the Nigerian Police, since the Police beget SARS, and these same issues existed before the formation of SARS. Now, to answer the question of brutality, repression and exploitation in the Police, one would also have to look at the history of the Nigerian Police Force. Some people have looked deep into this, one of whom is the CLEEN Foundation, and below is an excerpt from their analysis:

“There is need to recognize and comprehend three important historical factors that have shaped the development and character of police forces and police – public relations in Nigeria. First, colonial conquest of Nigerian nationalities took place piecemeal over a long period (1861-1903). Nigeria’s constituent nationalities were conquered at different period. As a nationality is conquered a British colonial presence is established by creating a police force for the territory. Second, violence and fraud were employed in the conquest of the nationalities and police forces under various names were established and employed as instrument of violence and oppression against the indigenous population. Third, given the character of colonial rule, police forces were the instrument used to sustain the alien domination. The significance of these three factors is that during the colonial era the police were not accountable to the colonized but to the colonizers and their excesses against the community were not controlled. As a result, the colonial police forces behaved as ‘army of occupation’, killing and maiming, and looting… Ever since successive police forces and governments in the country have frequently likewise deployed the police.”

CLEEN Foundation, Analysis of Police and Policing in Nigeria

In essence, the excerpt above analyses how our police were created to serve the interests of the ruling class (at first the colonialists and afterwards the elites) and continues to serve that purpose to date. Now, on the issue of purpose; if the maintenance of order is the essential purpose of the police, and curbing and curtailing violent crime the reason for the formation of SARS, then one may easily conclude that the police, and its special arm, have both failed their purpose. Perhaps this is why the Nigerian Police is rated the worst in the world, and people are calling for an end to SARS. However if one were to consider serving the interests of the ruling class as the essential purpose of the police and its SARS, what would one find?

Well, one would find that wealthy and powerful Nigerians are hardly ever stopped at police roadblocks, seldom get randomly picked up by SARS and almost never wallow in detention without trial. One would also find that those who sleep in police cells, complain about brutalisation by SARS and get proclaimed guilty until proven innocent is overwhelmingly poor. One would also find that while the worst reports of police and SARS extortion and repression tend to happen in poorer neighbourhoods, richer neighbourhoods are scenes of heartwarming police protection where policemen serve as details and orderlies. Lastly, and perhaps most importantly, one would realise that the issues of public disorder and violent crimes which the police and SARS are supposed to curb and curtail are caused by the effects of the excesses of the ruling class–namely inequality, inept governance, weak institutions and pervasive corruption.

Hence, one would, having looked at all these issues, conclude that while police and SARS may have done a bad job of maintaining public order and curbing crime, they have, for decades done a fantastic job of protecting the ruling class from their excesses.

So, then, if we really mean to #EndSARS, that is, to end police brutality and its attending issues, we would have to end #EndPOLICE too. This would require a radical re-organization and re-orientation of the police, from the concept and precept of serving the ruling class to serving the masses, who for generations they have oppressed and suppressed. Unfortunately, this writer does not see that happening anytime soon, at least not with the kind of politics and politicians that we currently have.