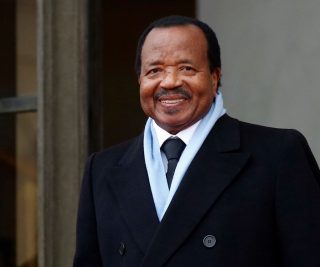 Do the Cameroon agitations spell the beginning of the end for Paul Biya?

The arrest of Patrice Nganang, a Cameroonian scholar, writer, and activist by Cameroonian security forces in Yaounde last week epitomized the repression and human rights abuse happening in Cameroon. The Cameroonian-American professor was arrested for writing a journal that seemingly criticized President Paul Biya’s handling of the Anglophone Cameroon agitation for secession. For a man whose major achievement as president is ‘keeping the peace’, this could signify the beginning of the closing set to Biya’s 35-year reign.

Along with the Iraqi Kurdistan, Catalonian, and Biafran agitations, Anglophone Cameroon’s (Ambazonia) quest for independence has generated much controversy in 2017. You might be wondering why a post-colonial African country like Cameroon, believed to be widely francophone, has two factions speaking different languages; English and French. Almost 20 percent of Cameroon’s mostly francophone population speak English, concentrated in the western part of the country, where it shares a border with Nigeria.

Why Cameroon is bi-lingual

Cameroon, unlike its current lingual makeup, was not majorly francophone when it was formed. In the beginning, it was served to Germany, becoming its protectorate in 1884 at the famous European ‘dining table,’ the Berlin conference. However, Cameroon was later divided between Britain and France after Germany lost the 1st World War, with the British part immediately joining the former British colony in Nigeria. After the creation of the United Nations, both British Cameroon and French Cameroon became UN territories.

While the French part of Cameroon gained independence in January 1960, its British part underwent a referendum in 1961 to choose if it wanted to reunite with Cameroon or remain part of neighbouring Nigeria. The result of the referendum showed the enormous wish of the British part of Cameroon to reunite with its French part, hence making Cameroon a federation. However, the federation was abandoned in 1971 for the United Republic of Cameroon, effectively reducing, even ending, political representation for the British Cameroonians. For many, this switch from a federation to a republic without concessions for minority groups like the British Cameroonians has created the problem.

Things haven’t gone according to plan, as it seems there’s a deliberate attempt to assimilate anglophone Cameroon by both Cameroonian and French authorities. Their plight is not helped by Cameroon’s president for life Paul Biya, who has been president for more than three decades, like most of his counterparts in Africa. The use of French in schools of learning, and in courts, necessitated in the latter by the appointment of francophone judges in Anglophone Cameroon recently, inadequate political representation where it mattered, and the deliberate repression by state security, resulting at times in death for some, are some of the state-sponsored agenda against the English speaking part of Cameroon.

The first demonstration of political repression happened when Paul Biya reinstated the multinational party system in the country in 1990. Fru Ndi, an anglophone Cameroonian contested in the presidential elections in 1992, but lost to Paul Biya, because of election irregularities and French interference according to one of Cameroon’s important religious leaders Cardinal Christian Tumi.

“Everybody knows that Fru Ndi won the election in 1992. Who organized the coup? It was Mitterrand and I am citing something [French President François] Mitterrand said to Biya, ‘jamais un anglophone a Etoudi’,” Tumi told Cameroonian tabloid Journal du Cameroon. The French phrase means ‘No anglophone should ever be allowed in Etoudi (the Cameroonian presidential palace).’ Not long after this, the agitation for independence or, to a lesser extent, more political representation and less marginalization for Anglophone Cameroon, began.

Paul Biya represents everything the anglophone Cameroonians are fighting against; neo-colonialist rule and authoritarianism. Pressure is surely on Biya, Cameroon’s president for 35 years. Biya has largely remained president for more than three decades for many reasons. His own rationale for remaining president? People look to him to keep the peace. However, for people who know him, the reason he gave is far from it; the real truth is closer to western Europe.

Paul Biya became president through a ‘constitutional coup’ aided by France in 1984 and has largely held on to power with the help of France. This is probably the first time he is seemingly being tested for ‘keeping the peace’. Biya is one of France’s key African allies, a prominent member of the Francafrique, a coalition of former French colonies in Africa who are still at the beck and calling of France. That important colonial policy of assimilation, where the French told their colonies that by adopting the French language and culture, they would automatically be French citizens, has not stopped even after independence for most African countries. There’s a French imperial nostalgia, some type of African cultural inferiority. And then there is the economic oppression.

Presidents of African francophone countries store their countries’ wealth in France, up to $500 billion per year, as part of a pact made with France, thereby keeping African countries indebted to France. In return, France has overlooked the dictatorial tendencies of the presidents of many of the former colonies; only interfering in situations that would benefit France. And while the debate also rages on over the logic in anglophone Cameroon trying to protect an Anglo-Saxon heritage that was not theirs before colonization, one thing is clear; this is their way of life now, and so they probably feel the need to protect it against French imperialism.

Since protests began last year over the appointment of francophone judges in British Cameroon, things have escalated very quickly. Anglophone Cameroon had to cope with no internet for many months early this year, a clear violation of the United Nations right to internet access. The internet was shut down in January 2017 on the orders of the government, to disrupt demonstrations calling for the independence of English Cameroon. After the internet shutdown, the Cameroonian government tried to dialogue with the Cameroon Anglophone Civil Society Consortium (CACSC), an organization of trade unions in anglophone Cameroon. Following an inability to resolve things, Paul Biya promptly banned the trade union group, calling them illegal while also arresting their leaders.

After British Cameroon announced its independence from Cameroon this year, there’s been a refugee crisis as thousands of Anglophone Cameroonians have fled across the border into Nigeria due to a government crackdown on protesters. The protests have given rise to secessionist militants, some of who attacked security officials, killing about 6 of them. Fearing a counterattack from the government, about 7500 people in that part of Cameroon are currently in Nigeria. The United Nations refugee body UNHCR in Nigeria says it is preparing for up to 40,000 refugees.

People who have spoken out against Biya’s rule of oppression and the systemized marginalization have been arrested and sentenced to prison on arbitrary charges. The decision taken by Patrice Nganang, one of the many intelligentsia in Cameroon, to wade into this crisis has seemingly made him an enemy to Paul Biya. And it is evident many more of Cameroon’s intellectuals will still speak, much to the dismay of Paul Biya who is looking to contest again in presidential elections next year; defeating intellectualism has been known to aid propaganda in dictatorships.

Rocking the boat of the somewhat ‘internalized’ fear that has been cemented into the minds of Cameroonians due to Biya’s authoritarian rule, will result in him being deposed with the same wind that’s been blowing African dictators in recent times. There are already calls for him not to seek re-election, Will the rest of Cameroon stand and defend the rights of Anglophone Cameroonians and their own rights too, or will they stand aside to watch Paul Biya trample on those rights, and effectively on theirs too? Like a refugee in Nigeria told Reuters, “Even … God himself will not allow things to go (on) like that.”