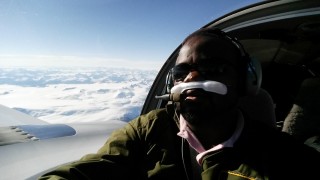 #DareToDream: One Nigerian’s solo flight around the world is set to change the global perception about Africa

This April, Nigeria, Africa and the rest of the world will witness a historical event that took about ten years to piece together. It is being organised by a group of individuals whose mission is to inspire Africans everywhere to dream big, achieve those dreams in a truly unique way and shatter stereotypes built around the African continent. This event is The Transcend Project. It will use ground-breaking inspirational and educational events with unique brand promotion and product marketing opportunities to generate revenue and support carefully selected charities which are transforming lives on the African continent.

And it all begins with one man, Nigerian pilot Ademilola Odujinrin, who is set to use one plane to take Africa on its very first round-the-world solo flight in April 2016 in the promotion of one world. The solo expedition is set to take off from Lagos then continue through central Africa, Ethiopia, the United Arab Emirates, India, Australia, the USA, Canada, the UK, Iceland and then return to Lagos via Algeria and Niger Republic.

Nigeria was chosen as the launch pad for the solo flight because of the country’s potential to lead Africa – whose people are capable of achieving extraordinary feats creatively and fearlessly – into a new era of global recognition for notable achievements. The expedition will offer a host of activities including educational opportunities for students concentrated around the 6-week solo excursion before, during and after the flight.

One of the key objectives of the Transcend project is to help people overcome limitations. Since 1933, only 114 people have appeared to be successful in a solo round the world flight, and these include flights made using helicopters and balloons. Lola, as the pilot is fondly called by friends, will be the 115th person to accomplish this feat in the entire world upon its completion, with the help of his team led by Project Director Ladi Ani-Mumuney, and Ireti Bakare-Yusuf, Head of Marketing and Project Management. He would also be among the top 100 in the category of pilots who used aeroplanes.

When asked what being No. 115 would mean for him, Lola exhaled, and it sounded like he was subconsciously rehearsing for when he disembarks the plane at the end of the expedition. Then he replied, “A huge sense of achievement. It’s been something that I have chased for too long. I will definitely feel elated at being able to accomplish that and leave a legacy for my kids…ultimately, I will inspire their tenacious character. There’s going to be a huge sigh of relief like ‘thank God this is done’. I really can’t wait. I have put too much into it.”

Lola qualified as a commercial pilot in 2010 and since then, he has clocked over 4000 hours flying as an airline pilot on both short and long-haul journeys. However, Lola has had a far more adventurous past significantly influenced by ‘sky-high’ dreams. From accompanying his pilot uncle on many trips seated in the cockpit as a seven-year-old (which inspired him to get where he is today), to participating in aerobatic flights and air races.

This enthusiasm and passion displayed by Lola, in addition to his dedication, professional background and physical and mental capabilities to endure the project’s requirements made Lola a perfect fit for the project, according to Mr. Ani-Mumuney who is also an aviation and extreme sports enthusiast. Embarking on an around-the-world trip entails flying an aeroplane all by yourself for about 14 hours nonstop and dealing with high altitudes and less oxygen availability. Hence, physical training is imperative.

But this particular mission is not just another ordinary flight or adventure. A number of notable pilots such as Amelia Earhart (1937) and Steve Fossett (2007) among others have undertaken a similar mission in the past with unfortunate endings. In July of last year, Russian pilot Sergey Ananov was found in Canada weeks after he attempted to make the trip in a one-ton helicopter. This poses questions around what concerns Lola and his team had in undertaking the mission which is Project Transcend.

“I have been flying aeroplanes for 17 years and I know that with aeroplanes of 1937 or 1930s and those of 2010 there is a huge statistical difference. You have one million chances of being hit riding a motorcycle or bicycle on the road every five minutes. But with aeroplanes it’s like one in every one million chances. It’s very much to stress that there has been some tremendous amount of technological advancement between 1937 and today and the greatest advantage is the GPS technology. I’m not really scared at all.”

Mr. Ani-Mumuney commented that while there were definitely some apprehensions in putting the project together on his part, the major fears have been allayed, including whether or not they could get a plane or get approved to execute the project. “The dream to conquer allows us to go on”, he says. “The project appears herculean, but when broken down into small sections it becomes achievable.” However, he mentions that The Transcend Project still struggles with a funding gap which it hopes to close by getting support from crowdfunding, companies and individuals through persistence and hard work.

“The Transcend Project is definitely the biggest one that I’ve ever worked on. We’re travelling across five continents, to 20 countries and 29 destinations, and we also have to organise the project and promote it in those places.”

Yet, it wasn’t easy for the project and its team to receive support in the West. Lola and his team had to work through racial stereotypes to get to the point where they are today. A crucial example involved getting the plane. Lola emphasise that it makes up most of the preparation as it has to be done right. Generally, most of the individuals that undertake such a mission lease their aeroplanes on trust, but “no one on the planet” was willing to take the chance with the Transcend team.

Instead, the people who reluctantly gave them audience made outrageous financial demands. Worse still, they received emails describing them as scammers. It took raising the $800,000 necessary to procure the aeroplane and depositing in a seller’s account to adjust the negative narrative surrounding Nigeria and garner support. And this is one of the most rewarding aspects of organising the project for Mr. Ani-Mumuney. Through his experience, also in seeking support, he has come across individuals and companies outside of aviation whose sceptical perception of Africa is changing, although it’s not an easy task. He has also been in touch with the aviation industry and more enthusiasts like him around the world.

The planned solo expedition with the aircraft Cirrus SR22 which has a total payload of about 439kg and has been specifically modified for the journey. It is also fitted with additional long range tanks and an HF radio installed for longer stretches of the journey, such as the leg from Australia to San Diego, as well as some parts of Africa. The aircraft has also been equipped with onboard cameras to provide live feed for the entire journey thus granting thousands of people the opportunity to view and share in Lola’s experience.

On a personal note, when asked how he managed to raise a family with his daredevil nature and profession, and in fact convince them – especially his wife – about this particular project, also given the amount of time and energy required to be a pilot, Lola gushes that he got lucky.

“I met Cynthia when I was quite young and she accepted me as a dare devil. We kind of complemented each other in that way because she was never scared to try anything, and I shared my dream with her right from the beginning. In fact, I’m worried that she doesn’t try to stop me enough”, he laughs. “I have had to sacrifice a lot, a lot of family time and finances, but I think that is what goes with anyone chasing a dream. When you chase a dream, you almost seem selfish as nothing else matters to you. For Cynthia to be around me and also to look after the kids is great.”

Concerning the plans for the future after Project Transcend, both Lola and Mr. Ani-Mumuney agree that all of the focus is currently on the present task at hand. However, as Transcend has no plans to be static, there will be other projects and activities to keep on inspiring the African youth once the current mission is completed round June.

According to Mr. Ani-Mumuney, “the journey of a thousand miles begins with a step. And I want to thank the Tolaram Group for their wholehearted support and for having 100 percent faith in us, the Lagos State Government, Lagos State Signage and Advertisement Agency (the Managing Director, Mr Mobolaji Sanusi, believed in us even though he initially thought we were crazy), and the Cross River State Government. They helped us to take that first step. We wouldn’t be here today without them.” 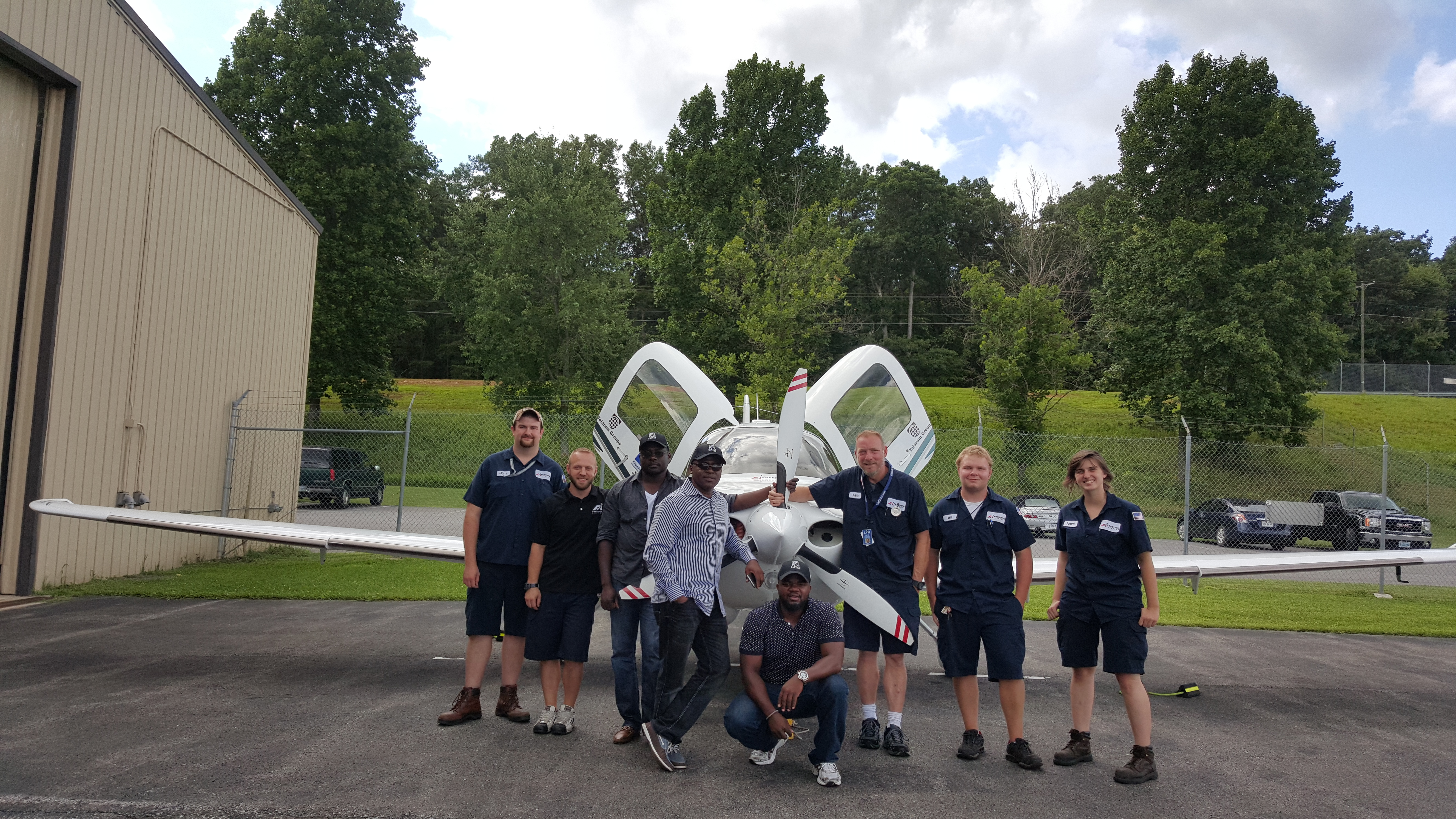