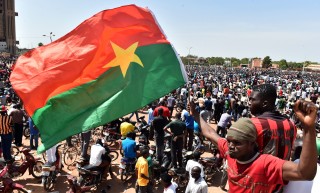 Burkina Faso proves Africa can be tough against political violence

On September 17, members of Burkina Faso’s elite presidential guard led by General Diendere interrupted a cabinet meeting of Burkina Faso’s transitional government, seized the interim president and prime minister and declared a coup,  and the world responded with an outrage. The UN, EU and the AU, among several other international organizations and foreign countries immediately demanded that the transitional government—who were preparing for an election in two weeks—was returned to power.

The statement of the African Union was particularly strong, when it called the coup “null and void.” However, the regional organization, the Economic Community of West African States (ECOWAS), failed to tow a similar hard line. Instead, it sent over a mediation group—led by the Presidents of Benin Republic and Senegal—which within 48 hours announced a proposal to grant the coup plotters amnesty from their crime, allow allies of former president Compaore to participate in the general elections and shift the date for the polls. Given that these were most of the reasons for which the coup plotters took power in the first place, the draft proposal was criticised by both internal and external civil society groups as an appeasement for a group that had just carried out criminal acts.

“We cannot accept an ECOWAS decision that would allow the assassins to get off free,” said Serge Bambara, the leader of Balai Citoyen—one of the popular opposition movements that led the protests to remove former President Blaise Compaoré from power—said in reference to General Diendere and his men. “The people of Burkina Faso cannot accept an amnesty for assassins of their people. And they will also not accept that the assassins’ accomplices be allowed to participate in elections that the people have fought for,” he added. Cynthia Ohayon, an analyst with the international crisis group, says it could have been the mediation team’s obsession with obtaining results too quickly that made it offer the widely rejected deal. Instead the regional body only inflamed the situation. “ECOWAS lost all its credit (it was already suspected of bias towards the former regime) among the population, civil society and most political parties. Seeing that ECOWAS was offering an agreement that was unacceptable, the army decided to take matters in its own hand.”

For the army, taking matters into its own hands meant issuing an ultimatum to the coup plotters to relinquish power or face force. It was this threat of force, backed by French support, which quickened the fall of the coup and the restoration of the Transitional Government. With the army marching on the capital Ouagadougou, the coup plotters who stalled on the ECOWAS proposal because they also wanted their leader to remain in government, began to plead for the deal. Civil society groups and the army refused the coup plotters surrender, but promised that there would not take revenge against them, or their families. The ECOWAS mediation team, enforced by high-ranking officials such as the Vice President of Nigeria, aware that citizens would not accept anything except the coup plotters unconditional relinquish of power, discarded their initial proposal. “The coup is over,” General Diendere said, as he bowed to the mounting pressure to relinquish power. “Carrying out this coup was the biggest mistake… We knew the people were not in favour of it. That is why we have given up.”

Although it took several days and a tense standoff for members of the presidential guard who had co-planned the coup to finally lay down their arms, the people’s power, bolstered by military threat and support by the international community looks to have worked just fine. It also revealed flaws of ECOWAS’s mediation approach which was too focused on appeasement and compromise and paid little attention to justice. This is very similar to the conflict resolution techniques that have been employed in other African political conflicts.

Following Kenya’s 2007 election violence, peace talks mediated by Former UN Secretary General Kofi Annan produced a power sharing agreement between the ruling PNU party of then President Mwai Kibaki and the opposition ODM led by Raila Odinga. But even though the deal broke the political impasse and ended the violence, it did little to push for the prosecution of the perpetrators of the violence which left over 1,000 people dead. Zimbabwe’s SADC mediated talks after the 2008 election violence also followed the same path, [its] pledge for human rights reforms has been all talk and no action,” said Daniel Bekele, Africa director at Human Rights Watch. “The government’s failure to punish the attackers only emboldens those intent on committing political violence and torture.” There are also fears of a similar scenario for the recent IGAD mediated South Sudan peace accord which resolved to share power between President Salva Kiir and Riek Marchar both of whose forces indiscriminately massacred thousands of civilians in the recently ceased civil war. “It was designed and written to appease the rebels and justify the causes of those who chose violence over democratic process within the SPLM party,” Malith Kur, a South Sudanese refugee and political commentator, said of the accord. Burkina Faso breaks that cycle, the authorities have already frozen the assets of fourteen persons accused of involvement in the coup and General Diendere has signalled his willingness to submit to a trial.

While she readily points out that “you cannot solve a crisis without compromise,” Ms Ohayon adds that a blanket amnesty and ignoring the popular desire for justice are the recipe for further crises. There can be forgiveness for those who have committed crimes, especially when they apologise and ask for forgiveness, but there also needs to be at least a measure of justice for the victims.” In Kenya, like in Zimbabwe and South Sudan there remain strong feelings—of varying degrees—of disappointment among the victims of violence and civil society groups that the perpetrators of crimes during the respective crises went scot-free. The people of Burkina Faso, by vehemently refusing the initial ECOWAS deal and insisting on the prosecution of the coup plotters have sent a message to African crisis mediators to ensure there are consequences for the architects of political chaos. How resonating that message will prove to be will depend on the strong will of the people of the next crisis point.

Burundi, Central African Republic, the Democratic Republic of Congo and the Republic of Congo are among the likely candidates for the next location of escalated political violence. While the crises in Burundi and the Central African Republic are already full blown—and they are additional examples of the failure of the soft mediation approach—things in both countries could still get much worse. “Burundi is burning while the world is watching,” said Pierre Claver Mbonimpa, who was shot in the face in Bujumbura for speaking out about human rights, on Thursday. The situation in CAR is also worse because of the little attention it has been receiving. Tensions are also rising in the DRC and Congo Brazzaville where, the presidents—Joseph Kabila and Sassou Nguesso— are seeking to extend their stay in office against popular wishes. African regional organizations and peace mediators must take cue from the lesson in Burkina Faso to be firm in demanding for the respect of the rule of law and wishes of the people as well as ensuring that those who subvert these laws face the consequences.