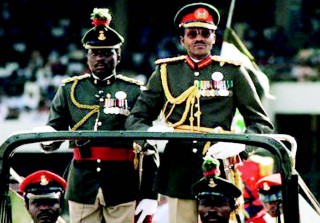 Buhari’s #WarAgainstIndiscipline Is Back and It’s 1984 All Over Again, Explained

Who is President Buhari?

If you’re Nigerian and you don’t know who President Buhari is then you should probably go and hug transformer because nobody can help you. In fact, wait, don’t do that because you’ll mess up my light. For the rest of you Muhammad Buhari is our 73-year-old former military dictator of Nigeria and now self-proclaimed agent of change and enemy of everything corrupt who spent the last 35 years trying to become President again so he could take us back to the good old days of 1983, when he first became Military Head of State.

Yes. The world was a much better place for Nigerians when he was president the first time and when he passed Decree Number 2, which allowed him to detain people without trial and Decree Number 4, which limited freedom of speech and allowed him to jail prominent journalists and musicians like Fela Kuti. Also in 1984, he launched the first War Against Indiscipline which tried to make Nigerians do very un-Nigerian things like not throw rubbish on the road, actually form orderly queues, and not show up late for work by threatening to publicly flog you or make you frog jump.

What is a frog jump? I’ve never done one.

This is a frog jump.

So President Buhari is launching another War Against Indiscipline? A war? That sounds scary.

Yes it probably is. But this time the name has changed. Technically this time around, it’s not the “War Against Indiscipline” but according to current Minister of Information, Lai Mohammed, we will now face the Change Begins With Me (CBWM) Brigade. It’s probably easier to look at this picture:

This is Buhari’s squad of CBWMs who are coming to make sure that you behave.

Of course it does. After all, we are taking things back to 1984.

Who was George Orwell?

You should probably go and hug another transformer but since I have time, George Orwell was a British novelist and satirist who wrote, among other things, the books Animal Farm and 1984 which is really scary story about a dictatorship that calls itself a democracy and uses innocent sounding names to talk about programs that really are all about the subversion of democracy.

Hold on! So the former dictator turned democratically elected president is trying to subvert democracy?

I didn’t say that. You did. There’s no way that President Buhari’s anti corruption war, which has really only focused on whats left of the supposed opposition PDP party, could possibly be undemocratic. And there’s no way that a man who appoints ministers he doesn’t really meet with or listen to could want to be a dictator. But Aso Rock has been really vague about the new “War Against Indiscipline” or “Change Begins With Me” program saying only that its to curb “insecurity, violence, kidnapping and other forms of social vices,” and to participate in “civil intelligence gathering.”

Civil intelligence gathering — that sounds pretty Orwellian to me.

It’s unclear. Apparently, there was a period of time during Buhari’s first stint as Nigeria’s Head of State where everybody was afraid of having to frog jump in front of everybody so everybody formed queues and threw rubbish in the rubbish bin and showed up early to work. But, that was also the time when President Buhari was really into jailing people and executing people without trial. At the time, he was accused of numerous human rights abuses by numerous prominent Nigerians including Wole Soyinka who wrote this essay recalling just how much it sucked to be a victim of Buhari’s first War Against Indiscipline. Some say that this is the reason why former Military Dictator Ibrahim Babangida staged a coup because we all know that military coups happen for the good of the people.

So should I be scared?

I don’t know. Are you un-disciplined? If twitter is anything to go by, most Nigerians don’t seem scared. They seem angry.

Recession is gradually turning to depression. Buhari is clueless and not in tune with reality but he just launched
war against indiscipline

How many wars are we fighting in this country sef? War against Corruption, War against Terrorism. Now there's War against Indiscipline..

But maybe we should let Fela Kuti, the man who Buhari jailed for indiscipline in 1985 explain it to us: