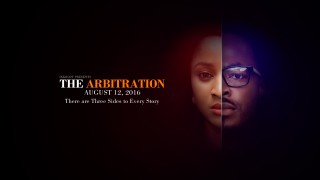 The Arbitration: Nigeria’s feminist exploration of consent in theaters

“There are three sides to a story” is the tagline for the new Nollywood film, The Arbitration.

It is also what marks the opening of the film, as the colloquial phrase flashes on the screen introducing the audience to Gbenga (OC Ukeje) and Dara (Adesua Etomi). It is an evening in Lagos when Gbenga and Dara share the intimate moment that signifies the central question with which Director Niyi Akimolayan teases the viewer, through a series of flashbacks and an arbitration session that unfolds throughout the film.

If Akimolayan’s direction hints to the audience that this arbitration is somewhat of a farce, it is only because as the aforementioned arbitration session is set to begin, both the accused rapist, Gbenga, and his lawyer Funlayo Johnson (played by Ireti Doyle) are unhurried to end their phone calls while seated at the rectangular table in the center of the all too stuffy conference room, signifying that to them this is all but an urgent matter. And when Dara finally has their attention and gives her testimony of what happened that evening –cue the whimsical Spanish guitar strings — it takes a bit to recognize that regardless of the smug expression on Gbenga’s face – this is a serious matter.

Dara Olujobi is a young and smart software engineer suing her former boss, Gbenga (O.C. Ukeje) on the premise that he coerced her to have sex with him in exchange for her shares in Iwaju Ltd., Gbenga’s wildly successful (thanks to Dara) tech company worth almost $150 million. While the film explores what happened the night Dara says she was raped, it is clear the Arbitration is not simply concerned with whether the two loved each other or not, but also the relationship between rape and the ‘truth’. Considering the past year of widespread conversation about how difficult it seems to be for people to understand what rape and consent actually are, The Arbitration seems to be asking a critical question at a pressing moment in Nollywood and a global film industry: Can silence truly stand for yes?

As both lawyers present their cases and question their respective clients to get to the ‘truth’, The Arbitration explores the usual conceptions around rape by asking all the wrong questions. How could Gbenga rape Dara if they were already having an affair? How could it be rape if it wasn’t violent? And furthermore, how could he have coerced her to have sex with him if she had done so willingly weeks before? Yet while The Arbitration at first toys the audience with the usual trope of the female seductress after a married man, it quickly establishes that it will not do so without a counter argument. Perhaps this is what the film provides that most conversations around rape in Nigeria and the world at large never quite get to – a rebuttal.

Conceivably inspired by Aaron Sorkin’s The Social Network, Niyi Akimolayan’s direction is sometimes unimaginative, but features dialogue that is quite intricate compared to other Nollywood films that focus on drama rather than developing a story. I found the film long and slow at times, but I was impressed by Akimolayan’s commitment to ‘stick to the script’. “He doesn’t get to rape you and get away with it”, Omawumi tells Dara impassionately after Dara finds out that Omawumi neglected to present her with the offer on the table from the opposing side. At that moment, Dara cannot see the point of losing everything just to prove that Gbenga raped her. She wants the shares she is owed and her job at the company that she helped build. And while at the beginning of the film and arbitration session it is implied that the only reason Dara leaves Iwaju is because Gbenga gets his wife pregnant, the narrative expands to reveal that her reasons for leaving have more to do with being undervalued when she has been critical in growing the company into the powerhouse that it is today.

The Arbitration never names feminism, but it dangles it in front of the audience constantly. In spite of Ireti Doyle’s omnipresent smirk at Dara’s claims, the film attempts, somewhat successfully to carry out what Section 357 of the Criminal Code Act always seems to struggle with in present day Nigeria.

There is only one rape support centre in Lagos. And there are only 18 rape convictions recorded in Nigeria’s legal history. When Nigerian writer Sugabelly, accused Mustapha Audu, son of Prince Abubakar Audu of raping her late last year, much of the public conversation reflected just why victims of rape are unlikely to report it. While the artist and blogger wrote a detailed account of her relationship with Mustapha and tried to explain why and how she continued to stay in touch with him for three years in spite of the abusive and destructive nature of her relationship, it seemed public perception still could not reconcile with what consent truly means. Sugabelly’s tale may or may not have influenced Akimolayan, although it seems that the story of a young girl working at a tech company who was in love with her boss and accused him of rape, suggests a resounding influence in the director’s exploration of consent.

While Sugabelly’s case never went to trial (she didn’t report it), The Arbitration imagines a different Nigeria for the audience, one where women are not afraid to report rape, or sit across the accused and look him in the eye while accusing him. The arbitration room serves as a place where a judge can acknowledge that he doesn’t quite understand consent, and is even willing to ask the legal squire what she thinks, only for her to tell him of a similar experience where the Vice Chancellor of her university propositioned her and another student inappropriately. In this new Nigeria, women’s experiences matter. Their voices and account of events hold as much weight as the voices of their male counterparts, if not more. Akimolayan gives us a feminist exploration of consent, without ever saying the dirty f-word so many Nigerian men and women seem to loathe to hear.

The Arbitration’s exploration of the legal understandings of consent also reminds me of the recent HBO film, Confirmation which details Anita Hill’s accusations of sexual harassment against Supreme Court Judge Clarence Thomas. At the close of Confirmation, the audience is told to consider how the case compelled the United States to have a new conversation about sexual harassment, which considered all the different shapes and forms of harassment – including verbal harassment and physical harassment. This is a conversation we have yet to truly engage in Nigeria. While The Arbitration quite impressively forces the audience to consider what consent is, it is a fictional tale unmatched by any case in recent memory within Nigeria. For an hour and forty-five minutes at the cinema, in The Arbitration, Nigeria gets to imagine a new narrative for victims of sexual assault. In real life, it seems we will just have to keep waiting.