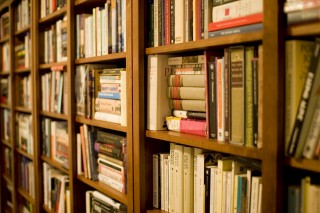 Today we are witnessing the emergence of an African literary market. Independent publishers have sprouted all over the continent: Cassava Republic and Farafina in Nigeria, Modjaji Books, Chimurenga, and Jungle Jim in South Africa, Kwani? in Kenya. But there’s a catch. This industry is emerging at one of the most difficult times in global publishing. Aside from grappling with the issues everyone else is facing, African publishers have problems of their own. First, Africa lacks a strong tradition or infrastructure for publishing. Second, the $14 it costs to buy a Penguin Classic is what many Africans earn in a week. Finally, within the continent, African literature has to compete in a media space monopolized by Nollywood and the thriving pop music industry.  According to a recent UNESCO study, there is one library to every million Nigerians. Unlike western publishers who depend on library sales and the bookstore circuit, the African publisher depends solely on an extremely volatile and unregulated market run by daredevil pirates and colluding customers looking for a cheap buy.

Still Bibi Bakare, the founder of Cassava Republic, is convinced that the future of African literary publishing is bright. “Our golden age is in front of us,” she tells me. The solution, she believes, lies in taking seriously the ongoing changes in the contemporary African literary scene.

Perhaps we should begin by debunking the claim that Africans don’t read—a long-held view that is widely touted in conversations about African publishing. Claims like this often conflate reading and buying. A reading culture does not necessarily depend on a standardized book market. Africa has always had a vibrant reading culture sustained by an informal economy of books consisting in piracy and an informal culture of book-lending. Data from digital reading platforms also suggests the opposite. The expansion of mobile technology in Africa is creating a reading culture that embraces a staggeringly wide variety of texts—romance, inspirational books, religious writing, and so on. The more interesting question becomes: How can African publishers leverage this unorthodox reading culture to establish a functional literary market?

The contemporary “audience for African literature,” Bakare explains, “is more discerning. They make more demands on their writers. They expect more. They don’t expect to be patronized. They feel like I can choose, I don’t have to be bogged down reading African literature if I don’t want to. They don’t feel a sense of anxiety about their taste as they may have done in the past.”

When Bakare speaks of the past, she has in mind the literary culture of the older generations. It was a time when the taste and interests of the reader did not drive the content of fiction.  Achebe’s 1965 essay “The Novelist as Teacher,” was not only metaphorical, it was also quite literal. For Achebe’s generation, African fiction existed primarily within the context of education. Heinemann, the prominent publisher of African fiction at the time, published fiction to serve the needs of an educational system that was also its primary buyer. In this context, the African reader was, first and foremost, imagined as a student.

With the establishment of a literary market on the continent, African readers are seen as consumers. Their taste and their power as buyers are beginning to exert a tangible influence on content creation. For example, a recent survey shows that Africans love reading romance, primarily consumed digitally on mobile platforms. Cassava Republic, it would seem, was already aware of this. A few years ago, they began work on a new imprint called Ankara Press, marketed as “a new kind of romance” providing “thrills of fantasy…in a healthier and more grounded way.” All six books debuted last year as e-books at affordable prices. Bakare says it has been so successful that they are working on releasing new titles in addition to expanding the brand.

Ankara Press is a good example of how literary content is inspired by popular taste. But it is also part of a growing trend of popular fiction in Africa. Jungle Jim’s pulp-fiction magazines, Mukoma wa Ngugi’s Nairobi novels, and Sarah Lotz’s pseudonymous erotica are just a few examples. Globally, publishers are more likely to turn a profit with popular fiction than with the so-called highbrow fiction. E.L. James’s Fifty Shades of Grey has sold 125 million copies since its publication three years ago. In contrast Achebe’s Things Fall Apart – one of the most significant texts of the twentieth century has sold 12 million copies over the last 50 years.

The Kenyan writer Binyavanga Wainaina has said that African publishers cannot build a market on the kinds of books written by the Adichies and the Teju Coles of the world. “None of these books are going to build industries,” he insists. “Chimamanda’s books are not going to build industries.” Wainaina believes that the game-changing move will occur when African publishing goes pop. “What will build industries is having thousands and thousands of romance books, of kids’ fantasy books, of transporting our children away, getting them hooked on these things…like Nollywood.”

Wanaina’s comparison of a potentially profitable African publishing industry to Nollywood is interesting because Africa’s literary gatekeepers have tended to vilify Nollywood as the poster child for all that is wrong with African pop-culture. Nigeria’s Nobel Laureate Wole Soyinka’s describes Nollywood as an “unprepossessing monstrosity” that provides little more than the “thrill of the grotesque.” Wainaina disagrees, instead he sees Nollywood as proving that there is power in those forms of storytelling that capture popular imagination. In other words, writing stories that speak to the masses is not just about selling books, it is about making sure that African literature remains relevant as a mode of expressing popular consciousness. It is about convincing Africans, especially the continent’s younger generation, that African literature can represent a familiar way of life – just like Nollywood or the African pop music industry.

An openness to popular fiction has yielded other unexpected outcomes and has enlarged the circle of what counts as African fiction. Those who follow the history of the African novel are familiar with the war of words between Chinua Achebe and Ghanaian author Ayi Kwei Armah during the 1980s. Achebe questioned the authenticity of Armah’s novel, The Beautyful Ones Are Not Yet Born. He saw the existential drift of the story as Armah “imitating the style…of some other people,” by which he meant Europeans. For experimenting with European forms, Achebe accused Armah of “using his talent in rather unproductive ways.” Today, there is a less restrictive and prescriptive literary culture in Africa. African writers are eager to explore different forms and are able to push boundaries as they please. Ivor Hartman’s anthology of African science fiction, Nnedi Okorafors’s alien encounter story, Lauren Beukes’s black-magic noir, E.C. Osondu’s story-fragments, Igoni Barrett’s Kafkaesque tale, Makumbi’s Kintu Saga, Sarah Lotz’s horror thrillers, Diriye Osman’s exploration of same-sex love, Teju Cole’s philosophical novel, and Khaled Ahmed Towfik’s dystopian novel are all the outcome of a literary culture that has come to accept difference, experimentation, and risk-taking.

In the face of literary experimentation and the possibilities that lie in exploring pop-fiction, it would appear that there is no place for the classics. But the fact is that new markets can be built around African classics. Writers of the past century, from Thomas Mofolo in the first decade of the 1900s to Ben Okri in the last, constitute a massive catalogue of the most brilliant and delightful stories that chronicle Africa’s growth and transformation. As publishers explore opportunities for investment, the African cannon can be contextualized and reintroduced to speak to a younger generation of readers in much the same way British and American literary classics like Pride and Prejudice or Moby Dick are constantly re-released.

The story of contemporary African fiction is hardly complete without accounting for the critic. Today, the critic’s role has been usurped by bloggers. More and more social-media savvy Africans are relying on blogs for news and commentary on African literature. Gone are the days when academics had the final say on all that was good (or bad) about African writing. Today bloggers—most of whom are self-trained literary critics—curate African literary content for readers and educate the market. Their passion for African literature is infectious and their power to drive sales as they seek out innovative ways of helping African readers connect with African writing is immense. The fact that bloggers know how to connect readers to new writing on the continent gives them a key role in the evolution of the African literary scene. This comes alongside the need to see African writers as more than simple wordsmiths.  With a Hollywood movie of one novel, a collaboration with British Vogue and an appearance on a Beyonce album, Chimamanda Adichie now represents a set of ideas and ideals that transcends her novels. Her celebrity status gives her access to a geographically diverse readership and makes her a global ambassador of African literature. As the means for circulating African literature become more diverse, so too will its audience and the need for multifaceted authors who can command attention within an already crowded public sphere.

The literary market is a vast ecosystem in which writers, publishers, readers, and critics are only some of the players in the chain of content production and distribution.  The task of building an independent, free, and literary culture in Africa requires productive interaction among the different facets of this system. But underneath the nuts and bolts of commercial publishing lies the simple fact that a new generation of Africans wants African literature that effectively conveys the social and emotional contexts of an ever changing continent delivered with tools from the modern era that are ubiquitous and easily accessible.