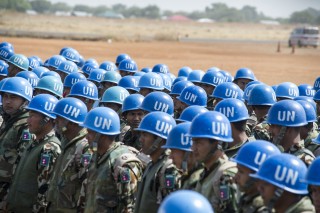 Africa has always been portrayed as a vulnerable continent that needs support from the international community. Perhaps, that is why there’s a lot of foreign interference in almost all orifices of african affairs. The United Nations is one of Africa’s big brothers, making decisions and implementing proactive measures which its homegrown organisation, the African Union (AU), fails to. While the continent is grateful for its timely intervention in a lot of cases, recent reports suggest that, with regards to Africa, a severe lack of accountability and impunity is allowed.

The Central African Republic (CAR) is one of the weakest countries in Africa especially since 2004, when the country became embroiled in conflict, becoming more impoverished as a result. With reports of mass displacements, human rights violations and warnings of a genocide, the UN assigned 3,000 peacekeepers to the CAR in addition to 6,000 AU troops and some French troops. In 2015, the peacekeepers sent by the UN to create conditions for lasting peace were accused of bestiality and sexual exploitation in the country, which is still torn by war. However, it all came to a head when Anders Kompass, the director of field operations at the United Nations office, exposed a confidential internal report on sexual abuse of children by some French and African peacekeepers in the CAR. Children – as young as eight – in Internally Displaced Peoples camps, were reportedly coerced into sex in return for food or a little money from the peacekeepers.

The report of the abuse was passed on to the French government after the UN failed to stop the exploitation. The French authorities immediately launched an investigation and as a result of the publicity the case received, Kompass was suspended. The UN, at this point, came under a lot of criticism by the media, for its lack of accountability and the suspension of Kompass, who was tagged a whistleblower.

Due to the disparagement from the media, the UN Secretary General, Ban Ki-moon, appointed an independent panel – the External Independent Review (EIR) – led by Marie Deschamps, a former Justice of the Supreme Court of Canada, to investigate the issue. The report by the EIR showed that the UN failed to act with the “speed, care or sensitivity required” for such cases. Three officials were found guilty of authority abuse and to this, Ban Ki-moon ordered the resignation of its representatives in the CAR. “To uphold the fundamental principle of accountability, and in the light of the history of allegations of sexual abuse by troops in the Central African Republic, including the current allegations, I had previously asked one of them – my Special Representative for the Central African Republic [Lieutenant General Babacar Gaye] – to resign,” Ki-moon stated.

One would have thought that the perpetrators of this sexual abuse would have been brought to justice with the leaders involved held accountable, however, this has not happened. Prompted by the UN’s lack of accountability and its reluctance to probe sexual abuse by peacekeepers in Central African Republic, on Tuesday, Anders Kompass announced his resignation.

“The complete impunity for those who have been found to have, in various degrees, abused their authority, together with the unwillingness of the hierarchy to express any regrets for the way they acted towards me sadly confirms that lack of accountability is entrenched in the United Nations. This makes it impossible for me to continue working there.” Kompass told IRIN, the Switzerland-based news agency.

There seems to be a pattern of covering up crimes by the UN in Africa. In February 2016, the journalist James Hall, published a special report which critically examines sexual exploitation of African children by UN peacekeepers. “Since the 1990s, UN peacekeepers have reportedly been involved in the sexual abuse of civilian populations in the Democratic Republic of the Congo (DRC) in Central Africa, South Sudan in East Africa, and Liberia in West Africa,” Hall noted.

There should be widespread outrage against the UN, as the body has encouraged the growth of perverseness among its troops by its failure to mete out appropriate disciplinary measures. However, the larger share of the blame should be heaped on the AU for failing to investigate sexual abuse against children by the peacekeepers. One of AU’s mandates is to promote and defend African common positions on issues of interest to the continent and its peoples, so why has it not taken any decisive step to ensure accountability? For how long will the AU be silent while its children are exploited?