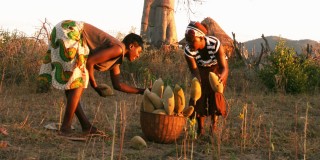 Mensah, an illiterate cocoa bean farmer in Ghana, spends strenuous hours under the sun to make ends meet for his family. But he knows that the price of cocoa beans is not dependent on Ghanaians, but rather foreign demand, which sees the cocoa transformed into finished goods such as chocolate bars (which are then sold back to Ghana and Africa-at-large). This disturbs Mensah, but what can a poor farmer do to change the narrative? Like the rest of his countrymen, he blames it all on the government.

So does John Akhile, the author of the 2014 book, Unleashed: A new paradigm of African Trade with the World. In his book, the CEO of African Trade Group, outlines everything that is wrong with the existing narrative on trade within Africa but also proffers solutions. He believes Africa is a consumer society, which is why countries on the continent are still poor.

“African countries are currently among the poorest countries of the world. Take Nigeria for instance, more than half of the population live on less than a dollar per day in a country of more than 150 million people. In this context, one cannot say Nigeria is a rich country. Nigeria exports crude oil but then imports more than 80 percent of what it consumes as a society. The idea of the book however, is not to complain about the existing narrative, it is to proffer solutions to the problem,” Akhile clarifies.

But this problem is not exclusive to African countries. As George Barlow outlines in his 2012 article; ‘Perils of importing more than we export’, the United States of America also heavily imported goods for the larger part of the 2000’s. “This cycle of debt enlargement has impacted every level of our economy. Government debt is now more than $14 trillion. The 2007 balance of trade deficit was $731 billion, while China made a $371 billion profit during the same year,” he wrote.

However, even if the United States consumed more than exported at some point, many would argue that their ability to bounce back rested in strong financial institutions, something severely deficient in many African economies, regardless of their import/export proportions.

But Akhile is not alone in his advocacy for Africans to begin exporting more. Nigerian Senator, Ben Murray Bruce recently started campaigning for Nigerians to buy locally made goods as a way of helping the Naira recover from instability. After all, according to him, exports can only be solidified when Africans produce quality goods for themselves. In a social media campaign, Bruce suggested Nigerians start buying Nasco cornflakes instead of Kelloggs cereal.

“The premise of the book is that African countries are currently operating a very bad trade paradigm, it is an anomaly for the poorest countries of the world to be supporting manufacturing capacities in rich countries. That is like putting the cart before the horse, turning the normal progression of development on its head,” Akhile says.

During a January 2016 testimony before the United States Trade Representative and the International Trade Commission, Tony Elumelu said the continent is ready for better trade terms with western countries. “What we need is a new trade paradigm that takes us beyond the dramatically unequal exchange of cheap raw materials for expensive finished goods, that disadvantages Africa.”

Akhile wants to encourage African countries to follow the example of the Asian tigers (Hong Kong, Taiwan, South Korea and Singapore) and develop their economies so they do not have to rely on the International Monetary Fund (IMF) or the World Bank for financial aid.

According to Akhile, African countries have it backwards in terms of trade- they are supposed to be producing to sell to richer countries. “Usually the poorer countries produce goods for richer countries, because the poorer countries have cheaper labour, they can produce labour intensive goods cheaper to sell to wealthy countries but African countries are dependent on imports, the governments have still not decided to implement strategies that work. If you export raw materials and import finished goods, you are creating a paradigm that will never bring you to wealth as a nation,” he explains.

Akhile’s book, Unleashed seeks to remind Africans that they have the potential to be very prosperous, but they have to shift to a different dynamic. For example, In 1961, South Korea was poorer than a good number of African countries but while Nigeria and other African countries adopted import substitution industrialization (ISI), South Koreans realized ISI would not work for them. They knew their local market was too small and their people too poor to build their own prosperity, so they decided to tow the path of export oriented industrialization (EOI).

Park Chung Hee former South Korean leader who developed EOI in the country, once said “when we looked out we saw that in the western world, there were more consumers, who were richer, so we decided to produce goods to sell to them as our path to prosperity.”

“In the book, we have laid a premise that if African countries were to adopt certain strategies that will work in their environment, they will achieve a considerable amount of prosperity like the Asian Tigers did before them. Hong Kong made use of textiles and labour to produce goods for export, Taiwan made use of labour, agricultural exports as well as technological exports, South Korea made use of labour primarily to produce cheap and low entry goods to build a stead climber approach to become a successful country, Singapore made use of primary labour,” Akhile explains.

In addition, John Akhile says African countries can decide to explore different ways to change their economies like the Asian tigers.

“If you look at the African environment, there are three ways in which the countries can prosper – setting up conversion industries – the use of raw materials to build an economic base by converting their raw materials to finished goods (for instance, instead of exporting crude oil, Nigeria can export gasoline and petroleum products), the use of labour – invite foreign companies to come to these countries, they employ local labour and produce goods and export to the companies’ own markets/customers, building capacity within each African country to manufacture goods for countries abroad while developing an entrepreneurial base in African countries,” says Akhile.

Foreign companies exploitation of African labour may not be the only way out of consistent poverty on the continent. IZA World of Labour believes that in many African countries, labour can be exploited for the betterment of the people through implemented policies. “Two key policy planks in the fight against poverty should be: raising the returns to self-employment and creating more opportunities to move from self-employment into higher paying wage employment,” it advocates.

“When Singapore started this process in 1963, the population was less than 3 million and they had a per capita Gross Domestic Product (GDP) of less than $500 per head, today, they are $78,000 per head (Number 3 in the world and higher than the United States of America). This is proof that the process works, if African countries were to begin now, the results would be pretty much the same in the long run,” Akhile says.

“The resources are there, we just need to change our mindset and focus from importation to exportation which is what the Asian Tigers have done to improve their economies,” he says. For Akhile, when Africans decide to focus more on investing as opposed to spending, exporting will become achievable.

According to him, African countries can study the habits of rich countries and seek out products they can manufacture to export to those rich countries, household goods (consumer-centric products), create a strategy, visit various markets, work with companies that understand the markets they want to penetrate and create comparative advantages. There are companies around the world looking for environments where they can convert products into finished goods, components – assembling – export. But what we need more than anything is for leaders to change their mindset towards economic advancement and prosperity.

Akhile believes African leaders need to think outside the box, instead of insisting on operating the same paradigm. They can choose to put infrastructure in place as well as finance/loans and study the foreign market and provide the information to businesses. Africans need to produce goods to sell to rich countries – this is a surviving mechanism but it all begins with good and focused leadership.

“No African country can afford to be a consuming nation. We should be thinking of how we transition into a producing society. Being a consuming society helps a few steal from their own people (the broad majority) who have nothing to eat,” Akhile said.

Corruption in public office is the dominant narrative in many African countries and poses a great threat to the future of the continent. On January 18, 2016, Premium Times reported that Nigeria’s Information minister, Lai Mohammed stated that 55 Nigerians stole over N1.34 trillion from the country’s treasury from 2006 to 2013. A statement which led to outrage of varying dimensions from the country’s citizens.

Americans are predominantly consumers but they still have a progressive economy. As an American retailing analyst, Victor Lebow once said, “Our enormously productive economy demands that we make consumption our way of life, that we convert the buying and use of goods into rituals, that we seek our spiritual satisfaction, our ego satisfaction, in consumption. We need things consumed, burned up, worn out, replaced, and discarded at an ever increasing rate”.

Does this mean Africa can be a consuming society and still be an exporter of goods? It is possible, as it will drive the continent to produce better quality goods with the awareness that such goods are leaving the continent. Nigeria may be on to something as Brazilian investors were in the country in November last year to propose investing in the Aba leather manufacturing market at Ariaria. It is their belief that if provided with world class equipment, the traders can export their goods outside the shores of the continent.

Although Akhile has made some valid arguments about how African countries need to focus more on exports, there are other factors to consider if the continent were to become more prosperous. What is the use of being a major exporter of goods if the institutions are not there to monitor the processes of instituting and maintaining economic growth drivers?

One of the reasons why the Asian tigers and even America have exceeded Africa’s economic success thus far is due to the fact that they have strong institutions to deal with challenges that threaten economic prosperity. As the biggest economy on the continent, Nigeria still struggles with issues of bad leadership and corruption. Who is to say that when the export process is solidified, these challenges will not rear their ugly heads to destroy it?

So, the argument extends far beyond amplifying exports as a means of lifting Africans out of poverty. The continent needs to also develop stronger institutions to tackle issues of corruption.