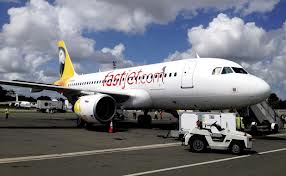 for failing to pay taxes for almost a year, the UK-based The Telegraph reported on Thursday.

The daily newspaper reported that it had been discovered that the London-listed company’s Tanzanian arm had not paid pay roll and property taxes.

In December last year, Fastjet signed an agreement with South Africa’s 1time Airlines to acquire all of the local airline’s issued share capital for R1.

Before it went under last year, 1time was the second-largest low-cost airline in South Africa.

The Telegraph reported that low-cost, Africa- focused airline promised travellers they could expect low airfares when it entered the South African market.

According to The Telegraph, the claim was the latest in an array of other demands and legal cases that the carrier is embroiled in. These include disputes in Kenya and Uganda.

It is believed that in a tax audit last month, the Tanzanian taxman found the company owed billions in Tanzanian shillings and $252 700.

The UK-based newspaper reported that a spokesperson for the carrier who claimed that the matter was a legacy issue inherited from the Fly540 operation, which Fastjet acquired in June last year. “Fastjet works closely with the Tanzanian government to properly address all historic issues relating to tax,” the newspaper quoted the spokesperson as