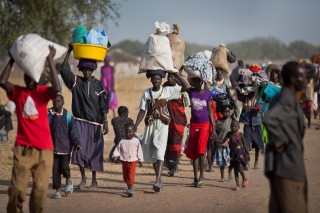 The famine crisis in South Sudan cannot be resolved with money, what is needed is peace

South Sudan has been plagued with famine for a long time now. The South Sudan government and three U.N. agencies have announced that this calamity is the result of prolonged civil war and an entrenched economic crisis that has devastated the war-torn East African nation.

Over 100,000 people in two countries of Sudan and South Sudan are experiencing famine and there are fears that the famine will still escalate as an additional 1 million South Sudanese are on the brink of starvation, said the announcement.

Pope Francis has called for aid to be sent to the millions of people facing famine. Addressing tens of thousands of people in St Peter’s Square at the Vatican for his weekly audience, the pontiff said, “Now more than ever there should be a commitment by everyone to not just talk but contribute food aid and allow it to reach suffering populations.” Pope Francis said millions of people, including many children, were being “condemned to death by hunger”, suggesting that rhetoric alone was not enough.

“Our worst fears have been realised,” said Serge Tissot, head of the Food and Agriculture Organization in South Sudan. He said the people are predominantly farmers and war has disrupted agriculture. “They’ve lost their livestock, even their farming tools causing civilians to rely on “whatever plants they can find and fish they can catch.”

South Sudan, the world’s youngest nation, was engulfed by a civil war in 2013 after President Salva Kiir accused his rival and former deputy Riek Machar of plotting a coup against him. An August 2015 peace deal was left in tatters when fighting broke out in Juba in July last year.

Initially, the violence was between two ethnic groups Dinka and Nuer which are supporters of Kiir and Machar respectively, but it has over time spread to other parts of the country, engulfing other ethnic groups and grievances. The United Nations has warned of potential genocide and ethnic cleansing and so far there is still no prospect of peace in sight.

“This famine is man-made,” said Joyce Luma, head of the World Food Program in South Sudan. “There is only so much that humanitarian assistance can achieve in the absence of meaningful peace and security.”

South Sudan, the oil-rich Unity State, a traditional Nuer homeland and Machar’s birthplace, has been one of the boiling points in the conflict and witnessed clashes several times between government and rebel forces.

The United Nation’s Humanitarian Coordinator for South Sudan, Eugene Owusu said conflict and insecurity for humanitarian workers, who had suffered attacks while carrying out their work, and the looting of “humanitarian assets” had exacerbated the crisis. In September last year, several aid agencies had to pull out of the famine-hit area of Leer because of escalating fighting between the two forces.

The drought has also affected food security in South Sudan. However, the biggest contributor to the famine is the inability of aid agencies to reach areas where the economy has collapsed due to the war.

Agreement on the Resolution of the Conflict in South Sudan formally ended the civil war in August 2015. It successfully enabled the return of Riek Machar, leader of the Sudan People’s Liberation Army-In Opposition (SPLA-IO), to Juba and the subsequent formation of the Transitional Government of National Unity in April. However, the formerly warring parties are now flouting it and increasingly preparing for widespread conflict. Implementation is stalled and fighting is already proliferating around the country. Unless something is done, it is only a matter of time before there is a return to war, and the agreement collapses.

The risk of regional war motivated the mediation efforts of the Intergovernmental Authority on Development (IGAD). It, as well as other international actors, put enormous pressure on Kiir and Machar to sign the peace agreement and establish the transitional government. The collapse of the agreement could have serious implications for the regional stability that IGAD’s Heads of State worked hard to protect.

The looming famine crisis in South Sudan can’t just be solved with more money or donations, what the Unity State needs is peace. The government signed a peace agreement but it’s yet to be fully implemented. On the ground, that translates to having safe access to an area one week but not the next. The humanitarian and aid agencies are trying their best but it’s not enough because everyone is limited in what they can do until the warring parties put their differences aside and give peace a chance.