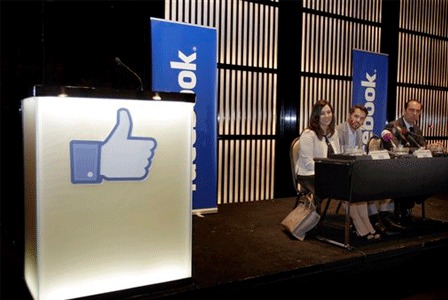 Global social network company, Facebook, has established its first sales office in Dubai to strategically connect North African countries.
The company says that its aim is to attract more ad sales by targeting the 45 million users that Facebook says it has across the Middle East and North Africa.

The establishment of the new office came after investors complain on the company’s fallen share price. The office is expected to attract potential advertising interest from the northern parts of Africa.

Facebook’s Vice President and Managing Director for Africa, Europe and the Mideast, Joanna Shields; confirmed that the decision to lay down roots in the region was purely commercial.

“People on Facebook … use it to organise rallies for all kinds of elections around the world,” she said. “We’re humbled by that and we are happy that we can facilitate. But we always downplay the (site’s) role because it’s really the people there who came together and did what they did.”

“In an open and connected world, more and more companies are realizing that Facebook is the place where they can build strong connections with their customers. We are here to share our experience and learn from the many talented, creative people in this part of the globe,” she said.

Executives however declined to say how much revenue the region currently generates or what their goals are for the future.

Facebook, a popular social networking site with 901 million monthly active users, became more popular in the northern part of Africa following its role as the catalyst for the protest and revolution that swept over the region last year. The company is listed on the US NASDAQ stock exchange.

The company had earlier team-up with Cairo-based advertising company Connect Ads to enhance its reach of advertisers in the region.

The office is starting with three employees in Dubai’s Internet City – a business park popular with tech firms including Microsoft Corp. and Google Inc.

Head of Global Marketing Solutions, Middle East and North Africa at Facebook , Jonathan Labin, who will be heading the company’s operation at the new office expressed delight in the new venture.

He said: “I am thrilled to be leading the team in Dubai. We already have strong partners in the region that are using Facebook in innovative ways to achieve real results. I look forward to working with many more businesses to help them extend their reach and realize the power of social.”

Dubai is a city considered as a regional hub for the geographical footprint spanning the North African Levant to the west, South Africa to the south, various Arab states to the north, and the sub-continent & beyond to the east.