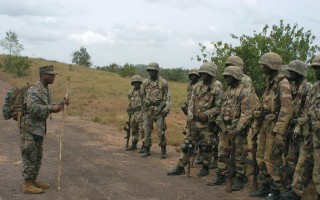 As more countries experience coronavirus lockdowns globally, several measures implemented to enforce the lockdowns have taken a violent turn in parts of Africa. Security forces across the continent have been given licenses and mandates to restrain movements by any means possible.

In Kenya, police fired tear gas at a crowd of ferry commuters as the country’s first day of a coronavirus curfew slid into chaos. Elsewhere, officers were captured through mobile phone footage hitting civilians with batons. Subsequently, on Saturday, March 28, 2020, AmnestyKenya warned that heavy-handed policing and the excessive use of force would not only risk fuelling panic and fear but may also be heightening the transmission of the virus.“If the operation was supposed to protect people from spreading the virus, the operation achieved the exact opposite,” a statement by Kenya’s police reforms working group said.

Nevertheless, the warnings were ignored as the Kenyan Police gave their “sincere condolences” on Tuesday, March 31 after a 13-year-old boy Yasin Hussein Moyo was shot and killed on his balcony. In the process of enforcing a coronavirus curfew, the police moved through crowded neighborhoods in Nairobi beating people. “They come in screaming and beating us like cows, and we are law-abiding citizens,” The father of Hussein Moyo said furiously.

Another death blamed on the Kenyan police attempting to enforce this curfew was that of Hamisi Juma Mbega, a motorcycle taxi driver. He had breached the curfew by taking a pregnant woman to a hospital in Mombasa and died from his injuries after being severely beaten according to a post-mortem report obtained by AP News.

On the second day of the 21-day lockdown ordered by President Cyril Ramaphosa, South African police and soldiers used rubber bullets to enforce the lockdown after hundreds of shoppers gathered outside a supermarket in Johannesburg. The police also verbally assaulted homeless people in downtown Johannesburg, beating them with batons and arrested over 55 people across the country that same day.

Similarly, a South African officer who allegedly killed a man for defying coronavirus lockdown regulations has been arrested and is currently undergoing investigation. Shenilla Mohamed, Executive Director of Amnesty International in South Africa stated that “while it is urgent and important to ensure that people adhere to the lockdown, simply resorting to force will hardly achieve anything.” Mohamed added that “hurting or causing injury by using force will only place more strain on the already overburdened medical services.”

Rwanda being the first country in sub-Saharan Africa to impose a lockdown has also experienced its own share of police abuse over coronavirus restrictions. Two violators of the lockdown protocols were killed by the Rwandan police last month. And although the Rwanda National Police spokesperson John Bosco Kabera claimed that the two violators allegedly “attempted to tussle with officers,” after disobeying lockdown orders, the killings were seen to be barbaric and uncalled for.

In a recent report, Human Rights Watch reiterated that some restrictions on rights, such as those limiting freedom of movement, could be justified, however, there should be “transparency and respect for human dignity.”

Africa’s most populous nation Nigeria is not exempted from these cruel and humiliating measures adopted by the police to enforce coronavirus lockdowns. A viral video circulating on social media shows officers of the Nigerian military allegedly punishing men for not obeying the COVID-19 lockdown order. In the video, soldiers were seen punishing violators of the lockdown by flogging them, among other types of punishment.

With the increase of police brutality all over the world, United Nations human rights experts have urged that all nations ensure their responses to the COVID-19 pandemic are proportionate, necessary, non-discriminatory, and measure which do not endanger human life.