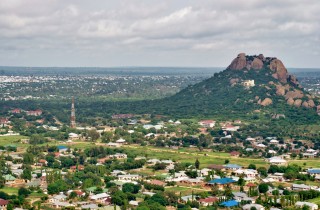 Tanzania’s move to its new capital Dodoma was originally proposed by the country’s founding father, President Julius Nyerere in 1973. The city was a relatively under-developed area characterized by periodic droughts, soil erosion, and subsistence farming. Among many factors, some reasons for the transfer were due to its centrality and good access in the national context, a pleasant climate and a distinct natural landscape. In collaboration with the United Nations and the government of Tanzania, a master plan was created for Dodoma by James Rossant and was completed in 1986.

Dodoma was assigned the new capital by title without having any major functional activities occurring there. Presently, only Tanzania’s parliament and the Office of the President (Regional Administration and Local Government) are permanently stationed in Dodoma. All major activities are still being conducted in Dar es Salaam. According to the 2012 national census, Dar es Salaam has a population of 4,364,541, while Dodoma’s population is 2,083,588. Dar es Salaam still accommodates about 70 percent of factories in Tanzania.

President John Magufuli came into power in October 2015. In July, President Magufuli announced publicly that his government must move to Dodoma within the five years of his presidential term that ends in 2020. Shortly after the announcements, the Prime Minister, Kassim Majaliwa took a lead step by indicating he would move in September 2016 and advised the cabinet to move also. “On that note, I order all cabinet ministers to pack their bags with me. I know they all have houses and sub-offices here in Dodoma,” he said.

The move has been delayed for years based on financial constraints, poor infrastructure, coupled with a lack of political will. Paskasi Muragili, the Director General, Capital Development Authority (CDA), the government’s implementing agency for the shift, had said in July that about 500 million U.S. dollars would be needed to move the government seat from Dar es Salaam to Dodoma. “This grand plan entails putting up of offices, houses for servants, roads, shopping malls, schools and hotels, among others,” said Muragili.

President Magufuli’s transfer statement has piloted a wave of announcements by government ministries and departments almost on a daily basis about shifting to Dodoma, thereby raising concerns on budgetary issues. Concerns have been raised on the strain the transfer would create as the move had not been adequately budgeted for in the 2016/17 budget presented by Finance Minister Phililp Mpango in June.

The transition has also brought some criticisms. Several civil servants have kicked against the rapid change to the new capital city. The costs of migrating with their families and looking for new accommodation, schools for their children, and other moving costs are somewhat unbearable by them. President Magufuli has however instructed that anyone who doesn’t want to move should be ready to resign and work in the private sector.

Tanzania’s National Housing Corporation (NHC) has already purchased 236 acres of land to build between 300 and 500 houses for the project that is worth 60 billion Tanzanian shillings (27,440,400 US dollars). The NHC has given a 12 month timeline for the construction of the houses. The Director General of NHC, Mr. Nehemiah Mchechu, said he was optimistic that the development of the designated capital will boost the construction industry’s contribution to 30 percent of the GDP from its current contribution of 24 percent. City residents have declared their joy in the capital transfer. A taxi driver, Mr. Mathew James, said “Since the president declared his government’s resolve to move to Dodoma, I have been earning good income from increased customers.

The government has already begun the renovation and expansion of Dodoma airport, which is expected to attract investors to the new capital.

The Prime Minister who was expected to move to the new capital yesterday, postponed his relocation. According to Jordan Rugimbana, Dodoma’s Regional Commissioner, the Prime Minister delayed his relocation to enable the ministers and other important authorities concentrate on issues pertaining to the parliament sitting. He also stated that the Premier would move after completion of the Bunge Sitting which starts on Tuesday next week.

The transition is seen to be more beneficial to the country as it would help reduce Tanzania’s 3.5 million housing deficit, attract more investments as well as strategically position the administration to govern the country effectively.