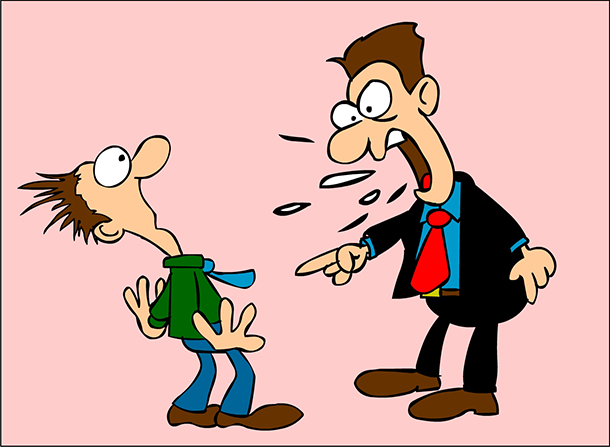 Excuse me, I’m the boss!

started business during my undergraduate days- I owned shops through which I provided computer related services. One of my shops was managed by an employee who always succeeded in getting on my nerves. She would come late to work, dressed in skimpy clothes and chew gum in a very irritating manner. She lacked devotion to the business, and I was struggling to keep it afloat. My complaints never seemed to bother her; she was aware that it was not exactly easy to find a replacement for her at that time. I always tried to be patient and fair, but when she suddenly refused to show up for three days (without permission), I knew I had reached my limit. I decided to pay her only for the days she had come to work.

Around that same time, she got an admission offer (to a school nearby) and had to leave. I was relieved that she was going! A part of me wanted to prove that I was the boss and make her beg for her salary knowing that she was going to be hard pressed for it (and she did not deserve the money, anyway). Somehow, I suppressed the urge. Instead, I visited her in her new school, had a friendly chat with her, wished her good luck and paid her in full. She was grateful for it and we parted with smiles.

I received news about her a few days later. She was dead! She died two days after I last met with her, having made some bad decisions. I was paralyzed with shock. Although I was happy that we had parted on a good note, I realized that I could probably have helped her had I been a little more caring. If I had shown more interest in her, I could have gotten her to talk to me. I could have helped her make better decisions. Had I cared a little less about the business and a little more about the worker, things might have ended differently.

For the benefit of employers of labour (or leaders in any capacity), I have a few pieces of advice:

1.       Never look down on your staff. They should respect you but not tremble at your majesty.

2.       Care! Show concern! Ask about their families, health, finances… Let them know you actually care for them. No matter how big your company is, make yourself accessible to the least of your staff. Take time to talk to the security guards, chat with the cleaners, take tea with the customer care personnel…

4.       Be a good example. If you want people to come to work early, ensure that you set the example.

5.       Communicate. Carry your staff along with issues pertaining to the company. Let them have a sense of belonging.

6.       Value their opinions. Even if you already had everything figured out, throw it open and listen to opinions. You don’t have to take them, but you should give your workers a chance to speak and feel that their opinions are valued.

7.       Motivate. Make your workers happy and let them always have reasons to want to be better. You can set up “best worker” awards or performance based prizes. It may even be how you speak. When a person does very well, praise him lavishly. You should also rebuke with caution. There is a world of difference between “it was terrible” and “it could have been better”.

8.       Help your staff improve. Send them for trainings and provide an environment that would bring out the best in them. I’m shocked at how many employers of labour deliberately keep their staff under-developed (often because they don’t want them to become so good that they would leave the company).

Do you know whose opinion I valued most at Whitney Houston’s funeral? Her bodyguard’s! You can tell the character of a man by the way he treats those beneath him.