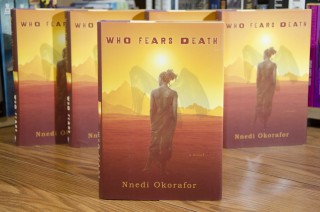 Science fiction is not a widely popular genre in the African literary community. In fact it was deemed a fringe genre, reserved for South African writers. But this is changing. And Nnedi Okorofor is just one of the writers driving this change.

2015 has been a good year for African science fiction. Nnedi Okoroafor published three novels in less than one year; Ivor Hartman is set to release an anthology of African sci-fi stories featuring both new and emerging voices in the genre. In view of the recent widespread acceptance of science fiction as an acceptable “African” genre, Ventures Africa had a discussion with Nnedi Okoroafor on the significance of the genre and its implications for African literature.

Ventures Africa (VA): African science-fiction was not a genre that Africans read or wrote actively until recently. Some even deemed it ‘un-African’. What would you say influenced your ideas and writing of a sci-fi Africa? Does your background in the diaspora have anything to do with it?

Nnedi Okoroafor (NO): I can’t possibly see why imagining Africa’s future, considering the role of technology and social shifts in the evolution of humanity, or the possibility of the existence of aliens, etc, could be un-African. It’s human.

That said, it’s a fact that the genre of science fiction as we know it was spawned in the West, so why expect Africans to write copiously within a genre (and let’s define genre here as a WAY of telling a story) that was not born in Africa? So, I think it important to fully understand what we are talking about and the various angles of it before we discuss it. Science fiction as a genre is popular in the West; it’s a style of storytelling that is normal and expected there. It’s a style into which imagining the future, the coming of aliens, social shifts, etc, is part it by definition.

Now, I was born and raised in the West; thus, I was exposed to the genre of science fiction and its importance to and popularity in society. Nevertheless, I couldn’t relate to these narratives within the books and films because I never saw reflections of myself, my family, my cultures, Africa in those stories. When I read science fiction growing up, I felt more like a tourist in those stories than a citizen. So when I first started to tell my own stories, I didn’t lean toward writing science fiction; magical realism felt most natural. But as I got older and started noticing more whenever I travelled to Nigeria with family to visit family, I started noticing Nigeria’s (Africa’s) futuristic ways. Then I started imagining. Then I looked for novels imagining what I was seeing and imagining and realized there were none. So I decided to start writing some. And because I was exposed to the genre of science fiction, I wrote the stories that I created from my experiences and observations in Nigeria in the style of the genre of science fiction that I was exposed to because I grew up in the United States.

That’s my longwinded way of saying, my being Naijamerican (Nigerian American) played a pivotal role in my writing my flavor of African science fiction, despite the fact that I really had no previous examples. I can cite stories and novels by African writers that glimpsed the future or used a sort of remotely scifi spice to tell a tale, but honestly, I wouldn’t call most of those early African narratives flat out science fiction.

VA: For a continent with such a firm belief in the supernatural (and about 90% of Nollywood movies exploring the theme), it would seem that Africans only have a problem with science-fiction in books. Why do you think that is?

NO: Yeah, I think Africans have loved the genre of science fiction for as long as the movies have been making their way to there. I think people are just not used to the stories in novel form because it hasn’t been done before, not consciously. That’s changing, so attitudes will change.

NO: I actually was quite hopeful in that post. I’m always hopeful. It was Nollywood director Tchidi Chikere who was saying that Africa is not ready for science fiction. I’ve always disagreed with that. I think he was speaking from the Nollywood movie side of things, which he certainly knows best…I just disagreed.

NO: It’s not speculation, it’s true! Mobile phones, laptops, tablets, the Internet, all were predicted and dreamed up in science fiction first. Science fiction writers speculate when they write. I don’t just make random things up. I consider the world around me. I live in it. I experience it. I love it. I hate it. I worry about it. Then I imagine what’s to come. When I wrote “Spider the Artist” (the story about the AI robots violently guarding the pipelines), I was thinking about bunkering, oil pipeline explosions, how oil companies take and destroy, the lack of compassion for local human life, consequences, and the day to day life of the average person. Killer AI robots in the Niger Delta who eventually go rogue are a logical progression.

VA: Ben Okri rightly said, Africa breathes stories. The continent is the perfect breeding ground for stories of mysticism and alternate realities but the potential remains untapped. Why do African writers shy away from this genre?

NO: Writers are supposed to go where the stories are. I have never understood the shying away from such fertile, enjoyable, haunted, beautiful, indigenous material. The stories practically beg to be told. I think a lot of writers are held back by themselves and the pressures of ideologies around them.

VA: Africa has massive problems such as starvation, poverty and corruption. What role does/will science-fiction play in shaping contemporary Africa?

NO: Imagination and ideas. You cannot find a solution to a problem until you imagine that solution first. If you are incapable of imagining that which is not there or has never been, you are already at a huge disadvantage. Science fiction does all this.

VA: What do you foresee to be the impact of Africans embracing all genres of storytelling?

NO: An increase in imagination. A greater tolerance for and a greater interest in ideas, spiritualities, religions, people who are unlike the norm. Greater social awareness. More worldly individuals. And new and innovative technologies born from within the continent.

VA: Do you think Africa is ready for alien movies, fighting robots and stories of a tech dystopia?

NO: Of course. It’s been ready.