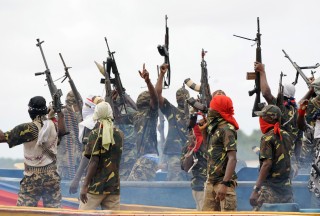 On the morning of the 1st of October 1960, Nigerians celebrated their freedom from British colonial rule. Now, 56 years later, the Niger Delta Avengers (NDA) group hopes to recreate this for the Niger Delta region by seceding from the rest of Nigeria. How they intend to do this remains unclear but, one established fact is that President Buhari will not rest on the country’s oars and watch it disintegrate. Rather, he is prepared to use every single governmental structure available to retain Nigeria’s sovereignty which he swore to protect. Is a repeat of the 1967 Biafran war on the horizon? No one can say, really, until the 1st of October this year. In the meantime, there is a need to understand how the Niger Delta Avengers have since positioned themselves in the oil rich region, and how they can now demand a republic of their own.

What you may not know about the Niger Delta Avengers

The Niger Delta Avengers pride themselves on being “a group of young Niger Deltans who have support from other [western, northern and eastern] parts of Nigeria.” They also call themselves educated and well-travelled, stating that most of them “were educated in eastern Europe.”  They do not have any recognised leadership, except for one ‘Brig. Gen. Mudoch Agbinibo’ who signs most of the statements published on their website. Statements and announcements of their attacks are usually made via their website. The Avengers had a Twitter handle before now, but it was shut down by Twitter about a month ago because the account violated some of the social media platform’s rules. According to a statement from the group, they are displeased with the way President Muhammadu Buhari is running the country and will not stop until their demands are met. The militants operate in teams and they have up to nine ‘Strike Teams’ spread across states, including Rivers, Ondo, Delta, Bayelsa, Cross River and Akwa Ibom.

What they claim to be fighting for

The Avengers have numerous demands. Firstly, when the group began its attacks in February this year, it listed about ten demands including the immediate implementation of the 2014 National Conference reports. They also demanded for the already constructed Maritime University in Delta state to begin operations. Also, one of their demands was the unconditional release of the Indigenous People of Biafra (IPOB) leader, Nnamdi Kanu, and the reinstatement of the Presidential Amnesty Programme that was suspended at the inception of the current government. They also talked about restructuring the country and implementing a form of government that will allow states in the region to control their resources. Ultimately, the Avengers appear to be fighting for a sovereign ‘Niger Delta Republic.’

Timeline of attacks by the militants

The Niger Delta Avengers began to claim attacks on oil installations from the 10th of February, 2016, more than 8 months after the Buhari administration began. On June 16, Ventures Africa compiled the list of attacks by the NDA group so far and they stood at fourteen. Since then, the militants have doubled the number of their attacks and the number of claimed attacks by the NDA group now stands at 27. Describing their mode of operations, the Nigerian President, Muhammadu Buhari said “the technology being deployed by the militants to destroy oil installations is high-tech.” Notably, the Avengers claim that since they started attacking oil installations, they have not killed a single person.

The Niger Delta Avengers’ link with other militant groups cannot be accurately established, since there are several of these militant groups and many others springing up all the time. Prominently, the NDA group has stated that they do not agree with the Movement for the Emancipation of the Niger Delta (MEND). The Avengers accused members of MEND of fighting for their pockets and not for the Niger Delta people. On June 7, in a statement titled ‘MEND your criminal days are over,’ the Avengers accused them of indulging “in kidnapping, hostage-taking, sea piracy, illegal oil bunkering, bank robberies and social crimes.”

The NDA group has also dissociated itself from the Reformed Niger Delta Avengers (RNDA), which local media have reported to be a faction of the former. Disclaiming the RNDA, the NDA stated that “the public and all sane minds should know that the entire household of the Niger Delta Avengers remain intact, we are in good spirit with highest morals and even more dedicated to get the ultimate targets.”

The Avengers have pledged solidarity to the cause of the Biafran agitators many times. An example of this is obvious in a part of their demands where they are requesting for the unconditional release of Nnamdi Kanu who is currently being held in the Kuje Prison. In a similar gesture, the Indigenous People of Biafra (IPOB) have stated that they support their fellow freedom fighters, the Niger Delta Avengers, NDA, describing them as their greatest allies.

In May, as a result of attacks by the NDA group, the junior oil minister, Ibe Kachikwu, announced that Nigeria’s crude production had fallen to a record low of about 1.4 million barrels per day (bpd) from the former production rate of 2.2 million bpd. The country’s 2016 budget is expected to be funded based on revenue accruable from a daily production of 2.2 million bpd. As of August, the oil minister still says Nigeria will need to produce 800,000 bpd more, in order to meet up with its revenue target. Recall, the group had named its activities ‘Operation Red Economy,’ a mission aimed at paralysing the Nigerian economy which solely relies on revenue generated from the sale of crude oil.

Following the realisation that the Niger Delta Avengers were serious the government said it is ready to negotiate with the militants. A committee, led by the National Security Adviser (NSA), Babagana Munguno, was constituted by the government to conduct peace talks with the militant groups in the region and initiate a ceasefire, especially with the Niger Delta Avengers. Soon after the committee began its duties, the Head of the committee claimed he had met with several groups claiming leadership of the Niger Delta Avengers; surprisingly, those groups had been brought to him by either a serving governor, a former one, a serving minister or one that had left office, with assurances that “this group is the one to talk to.”

In a similar bid to fast track the quest for peace in the oil region, the Nigerian Minister of Youth and Sports, Solomon Dalung, reportedly visited Oporoza in the Gbaramatu Kingdom, Delta State, and met with representatives of the Niger Delta Avengers. Before then, the Minister of State for Petroleum Resources Ibe Kachickwu, Delta state Governor Patrick Ifeanyi Okowa and some others also claimed to have met with the Avengers. Unfortunately, the NDA group shut down these rumours by stating that the government officials only met with imposters and not with any of its representatives.

Recently, the Nigerian government also alleged that they in talks with the militants via the multinational oil companies operating in the Niger Delta region, but the NDA group has refuted these claims.

Why negotiations have failed so far

The main reason the Avengers have given for not being involved in the peace talks initiated by the government so far, has been that they are not genuine. One consistent and major condition for dialogue they have asserted is that they want international communities to witness any roundtable discussions they have with the Federal Government of Nigeria. So far, the Nigerian government has not shown any commitment to this condition. A few days ago, the Niger Delta Avengers named a chieftain in the oil region, Edwin Clark, as their negotiator. The militants said they will “support any collective/negotiation team emerging from the Chief (Dr.) Papa Edwin Kiagbodo Clark.”

The Nigerian government is considering a military action against the NDA

Late last month, the Nigerian Army said it would deploy full military action in the oil-rich Niger Delta region, if dialogue with the Niger Delta Avengers fails. According to Buhari’s Senior Special Assistant (SSA) on Media and Publicity, Garba Shehu, “so far, the President has resisted the urge to pull the trigger. The army has mobilised to the region but military action has been delayed as the country absorbs the incredible shock that has come with the fall of oil revenues.”

However, many stakeholders in Nigeria and abroad, including the British High Commissioner to Nigeria, Paul Arkwright, and governors of the Niger Delta regions, have warned the Federal Government to not resort to military pressure to tackle the resurgence of militancy in the region.

Recognizing the impending military action, the NDA group said it is aware of government’s plans. The group said its intelligence gathered that the dialogue in question by the Federal Government is only a delay tactic to enable the purchased drones arrive the country from the United States.

The last attack claimed by the Niger Delta Avengers group was on the 24th of July, about a month ago. In a statement, the ceasefire period will see it continuously adopt “asymmetric warfare,” even as the militants allow the Niger Delta elders [Edwin Clark and co] and genuine stakeholders go to the dialogue table with government and the multinational oil corporations whenever the “enabling environment” prevails. The Avengers, however, vowed to fight more if this opportunity fails.

In what seems to be the militants sticking to their guns, the Avengers have said they still hold onto their resolve to declare a Niger Delta Republic if the Nigeria government fails to heed to the calls by several Nigerians and groups asking for the restructuring of the country. Could this be another civil war looming in Nigeria? Maybe, maybe not. It depends on the path the militants decide to toe. It is certain that any attempt aimed at breaching the country’s sovereignty will receive a similar treatment that insurgents are faced with in North-East Nigeria. Just like the NDA has posited, the suffering grass, if this happens will be innocent children and women who are not part of the whole events.