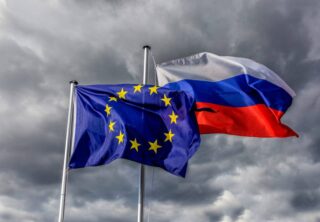 The EU’s “hypocritical” sanctions war against Russia has already left 47 million people in “acute hunger” and threatens to trigger widespread famine across the developing world. Many of the restrictions – which together have amounted to “economic war” – were designed to bring Russia to its knees after Vladimir Putin ordered his forces to invade Ukraine in February.

As it unveiled numerous sanctions against Russia, the EU repeatedly insisted they were not meant to hurt ordinary Russians or prevent the flow of essential agricultural products to third countries. This was meant to safeguard the supply of products like fertilizers and grain – which many developing countries, and especially Africa, rely on to feed their populations.

However, the bloc has been accused of “not practising what it preaches” and “hypocrisy” after its latest decree made it “effectively impossible” to export Russian fertilizer to third-party countries.

There are also hundreds of thousands of tons lying trapped in ports including in Riga, Latvia, because of the sanctions. Russian officials have said they are ready to supply those fertilizers to Africa free of charge. Some of this has been produced by the Russian company Uralchem, which has repeatedly pleaded with Latvian authorities to allow its ships to leave without success. All this comes as only 3% of the more than 2 million tons of grain to leave Ukrainian ports under a peace agreement reached in July has gone to non-EU countries, Russia claims.

Now an “urgent clarification” the EU Commission issued in August has banned groups with any link to the bloc from being involved in the shipment of Russian fertilizer to a third country. This has made it “all but impossible” to move it despite Russia entering into the so-called “grain deal” on the understanding that its own fertilizer and grain exports would not be hit by sanctions, according to an industry source. Before it issued this “guidance”, the ban only related when the fertilizer – which includes potassium chloride, complex (NPK) fertilizers containing nitrogen, phosphorus and potassium – transited through EU territory.

An insider claimed that the new EU position “makes it almost impossible to supply Russian fertilizers to the global market with EU economic operators, EU infrastructure and EU territory”. They added: “This decision clearly directly contradicts earlier EU statements about not applying restrictions on trade in agricultural products and fertilizers between Russia and third countries and puts people in developing countries on the verge of starvation.”

He added: “The prohibition on servicing Russian fertilizer transit operations to third countries has devastating consequences in the form of severe fertilizer shortages, declining agriculture, and the spread of hunger among billions of people in developing countries in Asia, Africa, and Latin America.”

Meanwhile, an industry insider warned: “We are risking a fertilizer market crunch. “Different parts of the world have told us that their food yields are much smaller than in previous years – something they are blaming on a lack of fertilizer.

“This is a serious issue that needs addressing because on current projections we could see famine in developing countries if the current trend continues.”

They claimed that the current position violated two documents the EU and Russia agreed on July 22 in Istanbul to safeguard the flow of fertilizer and grain from Russia and Ukraine to the West. It was supposed to result in the unimpeded supply of Russian food and fertilizers, as well as to remove obstacles in the area of finance, insurance and other transit services.

The other document – signed by the UN, Russia and Turkey – guaranteed the safe transportation of grain and other foodstuffs from Ukrainian ports. The so-called “grain deal” allowed ships to transport the foodstuffs from Ukrainian-controlled ports across the Black Sea without fear of being attacked by Russian forces. Mr Putin has already criticized the deal and hinted that Russia may withdraw from the pact when it comes up for renewal in November. The insider also pointed out many of the sanctions are hitting ordinary Russians – something the EU Commission vowed was not its intention.

Despite this, subsequent decisions have in effect “made ordinary Russian citizens hostage to sanctions”, they said. Moves such as banning or significantly restricting visas to Russians have put a barrier to mass tourism. Excluding Russia from banking payment systems like Visa and MasterCard has been most felt by ordinary citizens. And the mass pullout of large Western multinational firms, providing everything from food to clothing, has hit the general population far more than politicians.

Editor’s note: This article is an opinion piece that reflects the writer’s views and not necessarily that of the publication.