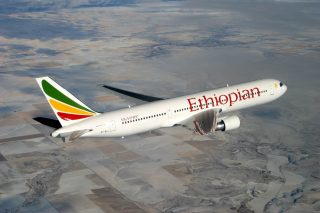 State-owned enterprise, South African Airways (SAA) has indicated that it is opened to foreign investment with the Ethiopian Airlines Group indicating interest in acquiring a stake in the struggling carrier.

“We are on record as saying we are open to the participation of the private sector. As we speak now, we’re talking to a few interested parties when it comes to SAA,” South Africa’s President Cyril Ramaphosa said at the Financial Times Africa Summit in London.

The intended privatization of the carrier is based on the fact that since 2011, SAA has been running at a loss. The airline delayed the release of its annual earnings due to its financial state.

However, Group Chief Executive Officer of Ethiopian Airlines, Tewolde GebreMariam said that despite the African National Congress (ANC) saying it would consider selling equity in the airline, there has been no visible strategy for such a plan. But “if South Africa asked Ethiopian to buy a stake, we would consider it,” Tewolde added.

The consideration has been on for a while. Tewolde said that the group had previously discussed it with SAA’s former CEO Vuyani Jarana before his resignation in May. Since Vuyani’s departure, the company is yet to find a replacement or conclude talks.

A deal between the Ethiopian airline group and SAA may involve the Horn of African nation helping SAA’s chronic debt problem with banks, which are withholding further loans until the airline can present a repayment plan for 9.2 billion rands ($611 million) of borrowings.

The struggling financial state of South Africa’s public companies is also weighing a lot on the economy. In the past, the state’s Finance Minister Tito Mboweni has had to allocate additional funds to debt-ridden firms, such as power utility Eskom Holdings to the South African Broadcasting Corporation.

In return, the collaboration will grant Ethiopian Airlines access to other routes in the Southern African region.

Ethiopian Airlines is Africa’s biggest aviation success story, with SAA and Kenya Airways struggling with losses and relying on government support. The Ethiopian carrier has looked to invest in other airlines around the continent, including new carriers planned for Ghana and Zambia.

Ethiopia Airlines and South Africa Airways are already members of the Star Alliance.