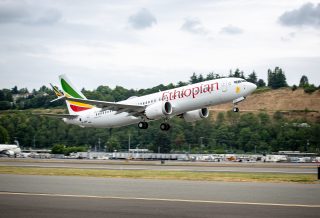 Ethiopian Airlines crash: What you should know about Boeing’s bestseller, the 737 MAX

On Sunday, March 10, 2019, an Ethiopian Airlines passenger jet headed to Nairobi, Kenya crashed a few minutes after take-off, killing all 157 people on board.  The crash is the second in the last five months involving a brand new Boeing 737 MAX 8, a new model of Boeing’s 737 MAX series that also crashed in Indonesia last October.

The cause of the Ethiopian crash is yet unknown but there are striking similarities between this latest incident and what happened in Jakarta, Indonesia a little over five months ago. A brand new aircraft in both cases; Ethiopia’s crashed aircraft was just four months old, Indonesia’s crashed 737 MAX was about three months old. Both crashed a few minutes after take-off. And both experienced a sudden drop in altitude and quick acceleration before the crash.

This has raised questions and suspicions over the safety of the Boeing MAX series. Thus, causing several airlines in countries around the world to ground their MAX fleets including China, Morroco, Singapore, Mongolia, Australia, Cayman Airways of Cayman Islands, and Ethiopian Airlines. “Given that two accidents both involved newly delivered Boeing 737-8 planes and happened during take-off phase, they have some degree of similarity,” China’s Civil Aviation Administration said. Currently, there are ongoing investigations to ascertain the cause of Sunday’s crash but preliminary investigation into Indonesia’s Lion Air 737 MAX crash revealed that a Maneuvering Characteristics Augmentation System(MCAS) could be responsible.

The MCAS is a new sensor Boeing introduced to the MAX’s control system. It is programmed to automatically lower the nose of the plane to prevent a loss of lift if it detects that the angle of the plane’s nose is too high. Simply put, the MCAS measures the plane’s “angle of attack” and acts as an autopilot to stabilise the plane’s altitude. But the problem with this is that the sensor could malfunction and transmit the wrong data to the plane’s control system causing it to automatically nosedive even when it’s not necessary. And to do this repeatedly as the pilot tries to manoeuvre and correct the situation.

Worse still, Boeing did not inform their clients of the new change to the flight control system. The fact that the MCAS was put on the MAX was not included in the manuals, hence pilots were not aware of its existence and were not trained on how to handle or control it. It was only after the Lion Air crash, Boeing sent out a warning bulletin to airlines operating the plane worldwide informing them of the sensor and how pilots can cut off the system if it malfunctions. But did Ethiopian Airlines get the memo?

Since the crash on Sunday, the attention of Nigerians has been drawn to the fact that Air Peace, a popular local air carrier had ordered 10 Boeing 737 MAX 8 last October. Although the airline is yet to receive its order, Sunday’s crash has forced Nigerians to call for the cancellation of that order. In response, Air Peace has put out a statement implying that the order still stands until it is confirmed that the Ethiopian crash was caused by a malfunction in the MAX.

“At this moment, it is premature to begin to talk about things and conclusions that have not been put in the public domain. Investigations into the crashes involving B737 Max 8 are ongoing. So, it will not be fair at this time to begin to make definite comments on those issues,” said Chris Iwarah, the spokesperson for Air Peace. The Nigerian public was not necessarily happy with this statement.

Earlier today, the General Manager, Public Relations of the Nigerian Civil Aviation Authority (NCAA) had to reassure Nigerians of their safety, saying that there is no cause for alarm as the Boeing 737 Max 8 is not yet in operation in the country.

Meanwhile, a similar situation in Vietnam got a totally different reaction. Although no Vietnamese airline is currently using the 737 MAX, the country’s Civil Aviation Authority(CAA) has said it will not grant licences for the first order of MAX that is supposed to be delivered in October. “…We will not be reviewing licences for the use of Boeing 737 MAX planes until the causes for the crashes are identified and the US Federal Aviation Administration takes proper remedying measures,” Đinh Việt Thang, Vietnam’s Chief of CAA said.

What this could mean for Boeing’s revenue

Boeing’s 737 is reportedly the world’s best selling and most reliable modern passenger plane. The 737 MAX, an upgrade from its last Next Generation series, has been the company’s bestseller and profit driver since its launch in May 2017. Last year, Boeing recorded sales of over 806 commercial airplanes, over 70 percent of them were 737 MAXes. Last year, the company also made a record sale of over $100 billion for the first time in its 102-year history.

This year the company plans to roll out 59 MAXes monthly to meet up with its backlog of over 4500 orders. But following two major crashes involving brand new MAXes in the last five months, airlines may be forced to cancel their orders, turning their attention to Airbus, the companies European competition in the commercial airline industry.

Although no airline has cancelled its order for new 737 MAX, Sunday’s accident already has a negative business impact on Boeing as its shares plummet by 13 percent after the crash, wiping out over $28 billion from Boeing’s market value. According to reports, Monday’s trading on Wall Street is Boeing’s worst stock selloff since September 17, 2001, days after the 9/11 attack.